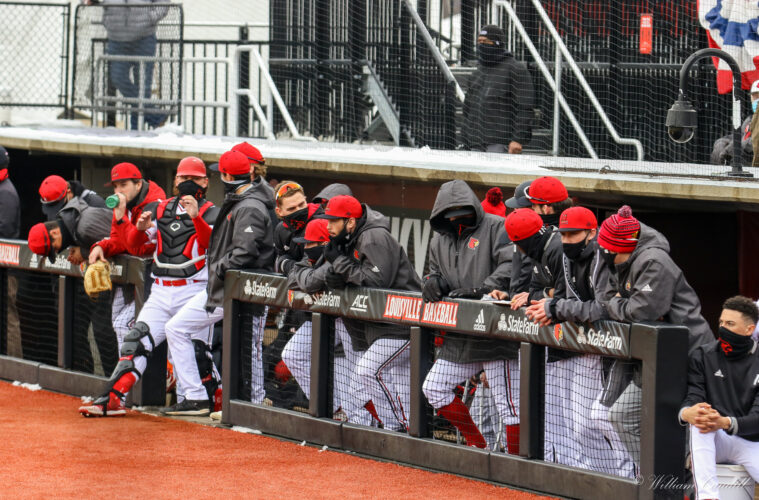 No. 4 Cards Take First Loss Of The Season Against Western Illinois

It was a rainy day at Jim Patterson Stadium, and I say that literally and metaphorically. The No. 4 Louisville Baseball team took a huge upset Friday afternoon when Western Illinois came to town and defeated the Cards, 8-3. There was already a black cloud hanging around when the announcement came that Louisville would be without 11 players for this weekend’s series, including Friday starter Glenn Albanese.

Western Illinois came to the plate in the first inning and quickly drew a walk and a single off Prosecky, who got the Friday start this week due to Albanese being unavailable. We would see Prosecky in a jam with the bases loaded and no outs in the top of the first. He was able to get a much-needed strikeout and a double play shortly after would get Louisville out of their bases loaded situation. The Cards went quietly in the first seeing Brown caught stealing second, Davis with a fly out, and Binelas with a ground out. An RBI would get a runner across the plate for Western Illinois in the top of the second inning.

Prosecky faced 4 batters in the third inning giving up one hit. Louisville went down in order in the bottom of the third, continuing their streak of bad luck and bad play. Western Illinois extended their lead to 3-0 in the top of the fourth inning before Prosecky would see an end to his day and be replaced by Tate Kuehner. Prosecky finished his day with 3.2IP, 6 hits, 3 runs, 1 error, and 7 strikeouts through 20 batters faced. Louisville would finally see themselves with loaded bases in the bottom of the fourth and just one out. An RBI from Tim Borden sent Binelas home to get the Cards on the board and cut the W. Illinois lead 3-1. Trey Leonard followed that with a two-run double allowing Louisville to tie the game before he was tagged out trying to make it to third base, for the third out of the inning.

With their second error of the day, Louisville would allow Western Illinois to take the one run lead at the top of the fifth inning. Kuehner would walk the next batter faced which would put Louisville in another bases loaded jam with no outs on the board. Binelas would get a forced out at home to Davis to prevent the Leathernecks from adding another run to their side of the scoreboard. It would not last long due to a bases loaded walk from Tate Kuehner and a hit to right field sending another runner home. The bottom of the fifth inning added nothing for Louisville as Binelas grounded out with bases loaded and they would head into the sixth inning down 3 runs. Tate Kuehner was able to work a 1-2-3 inning in the top of the sixth giving the Cards an opportunity to cut their deficit. They would get two hits in the bottom of the sixth but would leave one on base before getting their third out and no runs added.

The seventh inning found Louisville in another bases loaded jam which they were able to find their way out of with Barrett taking Kuehner’s place on the mound.  The Cards would add no more runs through the seventh, leaving one runner on base. Going into the eight, Louisville found themselves down 6-3. The Leathernecks extended their lead to 8-3 during the top of the eighth off a 2 RBI single to right field. With a widened gap, Louisville stepped to the plate in the bottom of the eighth inning and came up with nothing. Binelas led off and grounded out. He was followed by Usher who was hit by the pitch and walked to first before advancing to second on a balk. Masterman singled before Borden struck out swinging, but Cameron and Usher would steal second and third to give Louisville two runners in scoring position with two outs. Trey Leonard struck out swinging which would leave Masterman and Usher stranded. Evan Webster would see a quick ninth inning facing just four batters and giving up one hit. Cooper Bowmaned was in to pinch hit for Bianco in the ninth and would draw a lead off walk. Luke Brown hit a fly out and Bowman was able to advance to second on a wild pitch. A couple of pitches later, he was able to advance to third on another wild pitch. Dunn would strike out on a full count leaving the Leathernecks one out away from getting their first win since May of 2019. Henry Davis was walked, giving the Cards runners on first and third with two outs when Alex Binelas stepped to the plate. He had the last out of the game giving Louisville just their 7th non-conference loss at home in the last six seasons.

Louisville will face Western Illinois for the final two games of the series tomorrow, with the first pitch of the day scheduled at 1:00p.m. on ACCNX.