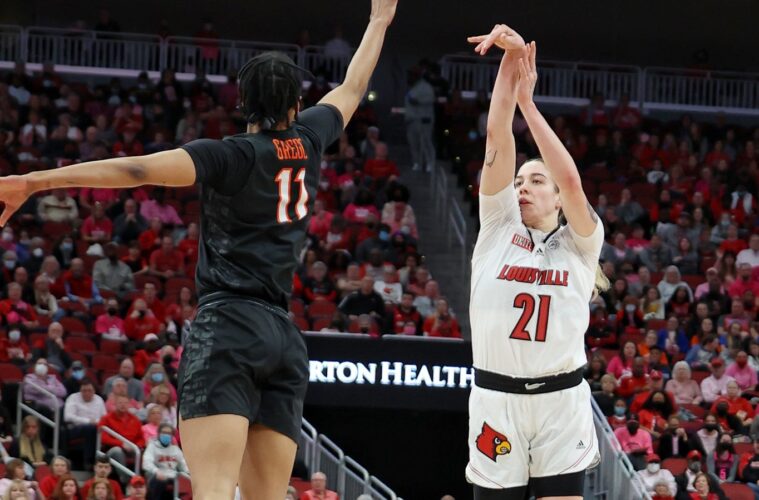 No. 3 Louisville Defeats No. 23 Virginia Tech On Senior Day

No. 3 Louisville hosted No. 23 Virginia Tech for Senior Day at the KFC Yum! Center and secured a 70-56 victory after coming off a loss at North Carolina.

It was a story of explosive offense and aggressive defense through the entirety of the game. It was obvious that this team knew they had improvements to make, and it was clear they have their minds set on one goal, cutting down a net. They were firing on all cylinders for most of the game and nearly neutralized a decent Virginia Tech team. The Hokies average nearly 71 points per game and were only able to find 56 in the Yum! Center today thanks to Louisville controlling the boards and having stellar awareness on the court. The Cards had 10 steals, led by Emily Engstler who accounted for 3 of the team’s 10 and had the only team block today. Mykasa Robinson showed a level of focus that you would expect out of the 4th year athlete and showed us why it’s a big deal to have her back on the roster next season.

The Cards had a total of 43 rebounds today and 28 of them came on the defensive end, once again led by Engstler who had 15 total rebounds. From an offensive standpoint, Louisville was shooting 41.8% and had 44 points in the paint. Hailey Van Lith was 8-17 today and led the team in scoring with 20 points, further solidifying herself as a shooter. Louisville is averaging 14.5 turnovers per game but today only had 9, something I know Coach Walz will be happy about.

Louisville will finish their season on the road with games at Pittsburgh and Notre Dame before preparing for the ACC tournament. Thursday’s game at Pittsburgh will tip-off at 6p.m. and air on the ACCN.