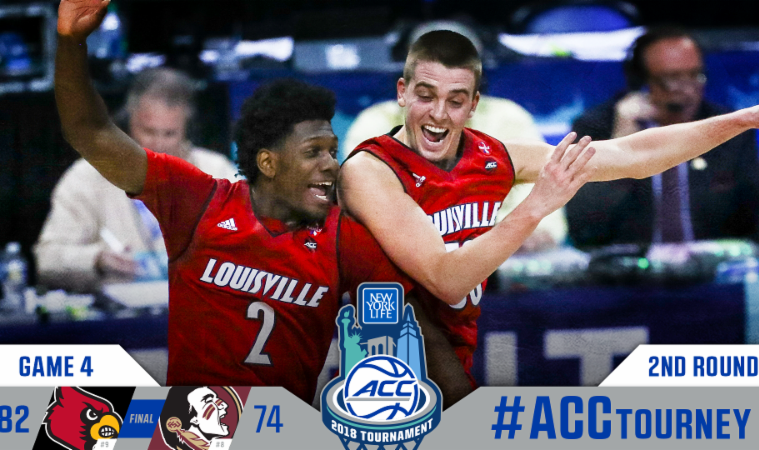 Cards Fly Off to Hot 1st Half to Advance to Quarterfinals

Deng Adel added 15 points and eight rebounds for the ninth-seeded Cardinals (20-12), who advanced to face top-ranked Virginia in the first quarterfinal Thursday.

Trent Forrest and PJ Savoy each had 14 points off the bench to pace No. 8 seed Florida State (20-11), which trailed by 26 with 11 minutes remaining.

A furious rally by the Seminoles whittled the margin to eight with 3:26 to play, but Louisville regrouped and hung on behind Snider. The senior point guard had six assists and five rebounds without committing a turnover in 35 minutes.

The teams combined for 21 blocked shots (11 by FSU), a tournament record.

#ACCTourney Notes
Louisville (20-12) advances to Thursday’s noon quarterfinal game and will face top-seeded and nationally No. 1 ranked Virginia (28-2). The ACC regular-season champion Cavaliers defeated the Cardinals twice during the regular season – 74-64 at Charlottesville on Jan. 31, and 67-66 at Louisville last Thursday night (March 1).

With Louisville’s victory on Wednesday, 10 ACC teams have now posted 20-win seasons, and one other (Notre Dame) has won 19 games.

Florida State is now 17-26 all-time in ACC Tournament play and 2-2 in second-round games.

Louisville senior Anas Mahmoud blocked five shots on Wednesday, upping his ACC leading total to 97 … The Cardinals, who entered the game ranked third nationally in blocked shots as a team, blocked 10 on Wednesday to raise their number for the season to 202 in 32 games.

The Seminoles actually topped the Cardinals when it came to shot rejections with 11, led by Ike Obiagu’s four blocks. The combined 21 blocked shots by Louisville and Florida State topped the previous single-game tournament record of 17 set by Duke (12) and Virginia (5) in the first round of 1999.

This was the first NCAA Division I game this season in which both teams blocked 10 or more shots.

Quentin Snider’s 19 points marked the 22nd time this season and the 59th time overall that the Louisville senior has reached double-digits … Snider also dished out a game-high matching six assists, the 19th time this season he has registered four-or-more assists in a game.

With 18 points, Louisville junior Ray Spalding posted his sixth consecutive double-figure scoring game, his 22nd of the season and the 34th of his career.

The Cardinals’ Deng Adel (15 points) now has 29 double-figure scoring games for the season and 55 for his career … Adel also led all rebounders on Wednesday with eight.

Louisville went 10-for-16 from 3-point range as a team, setting an ACC Tournament record for best shooting percentage from beyond the arc in a second-round game (.625).

PJ Savoy and Phil Cofer each connected on three 3-point shots in the second-half as the Seminoles pulled as close as six points after trailing by 26 with 11:35 to play.

Savoy, who finished the game 4-for-7 from beyond the arc, finished with 14 points to match Trent Forrest for the team high in scoring … Savoy and Forrest shot a combined 11-for-18 from the floor

Forrest scored in double figures for the 10th time this season and has averaged 17.5 points in his last two games following his career-high 21 versus Boston College in last Saturday’s regular-season finale … Forrest also tied for game-high and led the Seminoles with six assists.