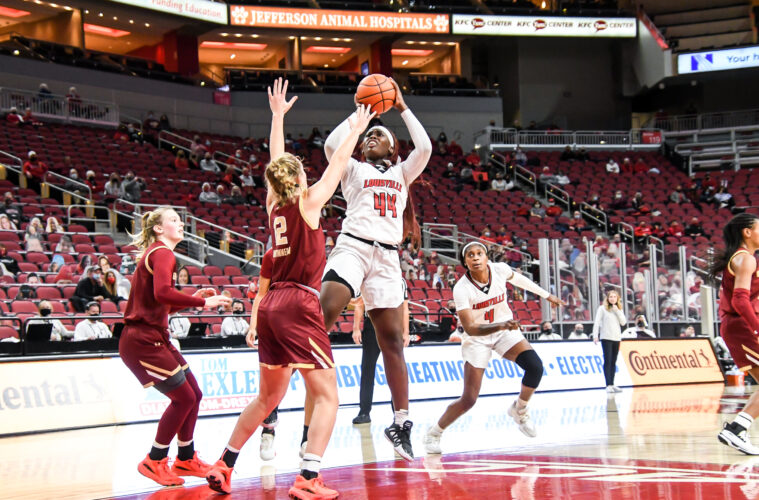 The number 2 Louisville Cardinals faced off against a Boston College team that has left a lot to be desired this season. As predicted, we had several players who stepped up and had big games tonight in an 89-70 win over the Eagles.

Louisville started their game off on a 9-0 run going 5 for 5 from the floor and gave us a peek into what would be an offensive rampage for the rest of the first quarter. The Cards sunk 5 three-pointers in the first quarter alone. This was backed by incredible inside play from Hailey Van Lith and Olivia Cochran, allowing the team to accumulate 21 points in the first six minutes of the game. We did see the offense slow down a bit during the second quarter, going 0-3 from the three-point line, but they still shot 45.5% from the field and went 6-7 from the free throw line. By halftime, Louisville had 7 players who had contributed points with Olivia Cochran and Elizabeth Balogun leading at 9 points each. The offense was busy, but the defense gave us a show too. The team had 13 defensive rebounds in the first half and forced 7 Boston College turnovers.

Early in the second half, Hailey Van Lith was left wide open to sink a three-pointer for Louisville. Just a few moments later, she was taken back to the locker room with a finger injury. Boston College made necessary adjustments during halftime and came out shooting 6-6, but they were soon silenced by Dana Evans, who was not going to let them easily close in on Louisville’s lead. Toward the end of the third quarter Hailey Van Lith said, “what injury?” and came back into the game with fingers wrapped to sink a jumper on her first possession. Despite a few turnover issues, Louisville extended their lead heavily in the fourth quarter. Dana Evans was shooting 100% in the fourth quarter and would have a total of 24 points for the night along with 2 rebounds and 3 assists. Not far behind her was Olivia Cochran with 18 points and 7 rebounds. Three other players were in double-digit scoring for the night including Elizabeth Balogun with 11 points, and Hailey Van Lith and Kianna Smith who each had 13 points. The team scored 42 points in the paint against Boston College and had 16 points off the Eagles’ 13 turnovers.

During his post-game press conference, Coach Walz said that this team still has a lot of work ahead of them. He adds that rebounding is an issue for the team, and they are better than how they are playing. He knows they have a big test Sunday because Florida State has had their number for the past few years. Coach Walz also confirmed that Kianna had clear x-rays and they just need to work on getting the swelling down. Hailey Van Lith has a dislocated finger, but as we saw she was able to return to the game tonight.

Dana Evans said during post-game that everyone can score and just because she is not starting off hot, she knows they will be just fine. She says she feels extra motivation going into the game against Florida State this Sunday because of the loss to them last season.