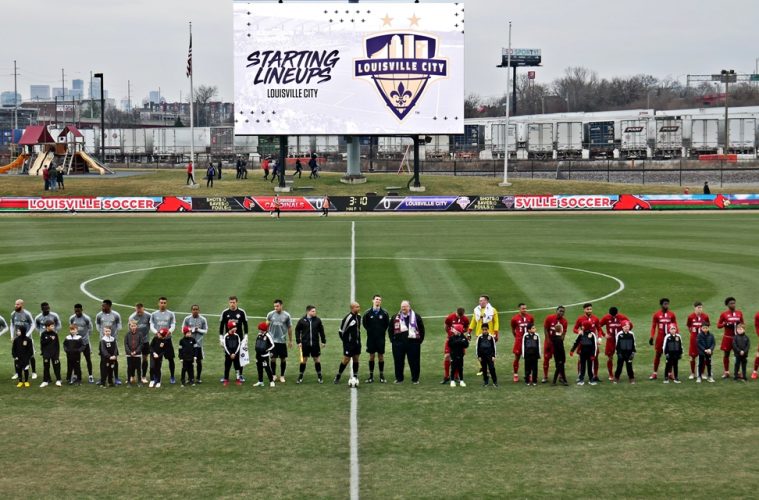 The spring schedule for University of Louisville men’s soccer continued Saturday as they welcomed professional side Louisville City FC into the friendly confines of Lynn Stadium for the 502 Derby. The Cards are coming off of a 2018 ACC championship season while 2018 had Louisville City notching its second USL championship as the first back-to-back champions in the league. The friendly match marked Lou City’s first match at Lynn since that championship match in November, and is their last warm-up before USL league play begins on March 9th.

The last 502 Derby (also known as the Friend-de-Lis) earned it a reputation as a physical affair, with the sides unable to resist the desire for city-wide bragging rights. This year’s started off in similar fashion as the Cardinals’ Brazil and Masset went to the turf barely a minute in. Lou City continued to push the Cardinals and dominated possession for much of the first half, but junior goalkeeper Jake Gelnovatch managed ably and denied the pro team the satisfaction of a goal.

With Louisville City playing up, opportunities began to present themselves for the Cardinals. Cherif Dieye and Elijah Amo both had runs up the middle, but it was Amo’s that resulted in a decisive foul. Lou City Tim Dobrowolski came off his line to contest Amo’s attempt and undercut the Louisville midfielder’s legs in the box. Despite several Lou City players arguing the case, the referee deemed it a foul. Fonseca stepped to the spot and connected past Dobrowolski’s diving save attempt as the Cardinals opened scoring in the friendly.

The first half ended with Louisville City still dominating possession but unable to slip one past Gelnovatch’s line. A diving save prevented a goal by Niall McCabe coming up the right wing, and another flew high after Lou City’s newly signed Abdou Thiam attempted a bicycle kick off a Brian Ownby cross.

As the second half opened the Cardinals had junior Will Meyer take his place between the pipes, but that was barely a factor as Lou City’s skill and experience began to take their toll. The equalizer came at 52′ on a Niall McCabe header off a well placed cross by George Davis IV. The USL champions barely gave the Cardinals a chance from there on out as the match would finish with Lou City notching 23 shots on goal to Louisville’s four.

Lou City’s next opportunity came after a favor was returned with Speedy Williams being taken down in the box by UofL’s Fonseca. But a weak strike allowed the Cardinals’ Meyer ample time to deny the attempt. The only two cards of the game came soon thereafter as both Lou City’s McCabe and UofL’s Portman earned yellows. Both teams had played a physical match to that point and the Cardinals did not seem eager to concede so easily to their professional counterparts.

But it was not to be for UofL. In a five minute span Lou City struck twice more. The second goal had Niall McCabe find Devon “Speedy” Williams for a fleet-footed strike coming across the box. The third at the 83′ mark came from an Oscar Jimenez cross that found Alexis Souahy for the header into the top left. The final minutes ticked by and Lou City wrapped up its pre-season friendly schedule with a 1-3 win over hosts UofL.

Credit goes to the Cardinals keepers Gelnovatch and Meyer who put up a stiff defense, with five and four saves respectively. Pedro Fonseca, Kino Ryosuke, Cherif Dieye, and Elijah Amo all showed signs of continued skill development of talent, in many cases easily beating their professional counterparts in duels. Post-game, newly promoted head coach John Michael Hayden talked of his team’s strident performance and ultimately was content to have good film to break down with his squad.