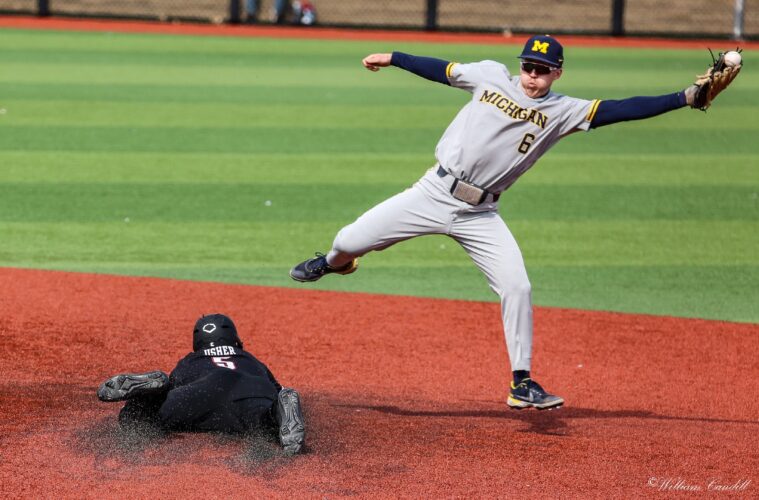 The University of Louisville baseball team claimed a series win over Michigan with a 13-1 victory over the Wolverines in the finale on Sunday at Jim Patterson Stadium.

Louisville (11-4) has now won eight of its last nine games after a 3-1 week with a win over No. 15 TCU and two of three with Michigan.

Following the conclusion of the suspended second game from Friday, the Cardinals got off to a fast start in the rubber game. Jack Payton plated the first run with a sacrifice fly and Levi Usher tripled home a pair to put UofL up 3-0 after one.

Michigan (8-7) got a run in the second, but it was all Louisville the rest of the way.

Ben Metzinger blasted a two-run home run in the second to extend the lead and then repeated the feat in the fourth to make it an 8-1 contest. Metzinger leads the Cardinals with seven home runs on the season and has 10 homers in his last 17 games dating back to last season.

Louisville kept adding on with the long ball, getting the first career home run from Isaac Humphrey in the seventh. Cameron Masterman tagged his fifth of the year in the eighth and Usher tacked on his first of the season three batters later.

While the offense was rolling at the plate, Riley Phillips had it working on the mound. The sophomore allowed the run in the second, but shut it down from there. Phillips (2-0) went six innings, giving up just three hits and striking out a career high nine batters.

Jared Poland, Ben Wiegman and Adam Dowler each came out of the bullpen with scoreless innings to finish off the victory.

Christian Knapczyk, Jack Payton and Usher each had three-hit games as part of a 15-hit day for the Cardinals. Usher and Metzinger drove in four apiece in the win.

Louisville will now get ready for Northern Kentucky on Tuesday. First pitch is scheduled for 3 p.m. ET at Jim Patterson Stadium.