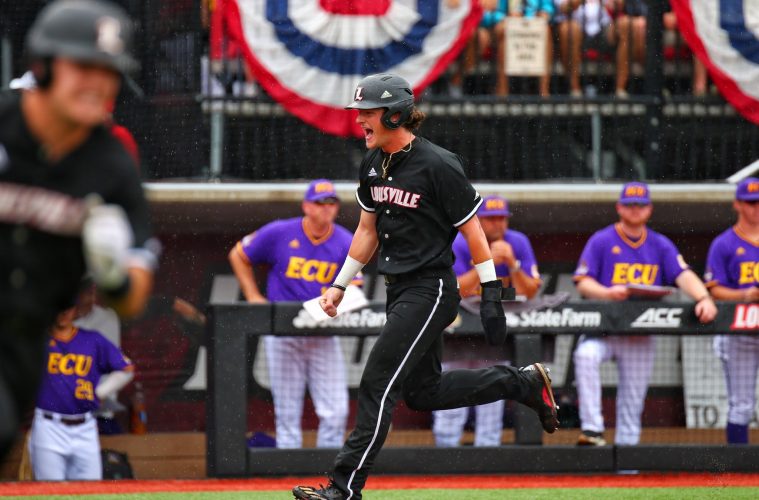 Playing in their eighth Super Regional in program history and sixth in the last seven years, the #7 Louisville Cardinals (47-17) made a statement in game 1 of the Louisville Super Regional, blowing out the #10 East Carolina Pirates (48-16) by a score of 14-1. Louisville was stymied to begin the game but exploded when the game reached the middle innings. It is only their 4th time in program history that they have plated 14 or more runs in the NCAA Tournament.

The Cards struggled in the first three innings against ECU left-handed ace Jake Agnos, with the Cardinal Nine going 3 up/3 down in the first 3 innings of the Super Regional opener. But when the lineup card flipped over and everyone got their second look at Agnos, the Cards really got things going.

They would go from being hitless through the first three innings to getting 5 hits in the fourth alone, including getting 6 straight baserunners. Junior shortstop Tyler Fitzgerald would get the party started, delivering an RBI double to crack the scoreboard. Junior designated hitter Danny Oriente would also strike an RBI double, though his carried a lot more weight. It came with the bases loaded, allowing all three baserunner to come home and give Louisville a fourth inning 4-spot.How do you follow up a 4-spot? With a 5-spot of course, and that’s exactly what Louisville did.

Sending 11 batters to the box in the fifth inning, 4 of them would send home baserunners. Fitzgerald would start the inning by getting his 3rd RBI of the game, with junior outfielder “postseason” Jake Snider following him up with Louisville’s 4th double in 2 innings to plate 2 more runs. Junior outfielder Drew Campbell would leg out a double play and help plate another run as a result, with a throwing error followed by a Justin Lavey single to help complete his trip around the bases. In the 4th & 5th innings, all but Alex Binelas and Henry Davis would collect base hits.

Louisville wouldn’t get 6 runs in the sixth after getting 4 in the fourth and 5 in the fifth, but they would get half that. Freshman third baseman Alex Binelas would join the hit parade, doing so in a grandiose fashion with an RBI triple and a wild pitch to send him home as well. While fellow freshman Henry Davis would be stymied on the day in base hits, he would still contribute to the cause with a groundout RBI to give Louisville an 11 run lead.

Typically the brightest-shining star in Friday starts, sophomore southpaw Reid Detmers was overshadowed by the blazing offense while still having a great game of his own. The Chatham, Illinois native went 7.0 innings deep, and did not give up a run until the sixth inning of the game. Striking out 6 batters on the afternoon, it would raise his total on the season to 162 to become the D1 leader in strikeouts, overtaking Navy’s Noah Song with 161.

Despite having an 11 run lead heading into the final 2 innings of the game, Louisville did not take their foot off the gas. The Cardinal Nine posted their fourth straight crooked number inning in the fourth, plating a pair thanks to both Binelas and Snider. Pitching didn’t fall off after Reid Detmers’ exit too, with freshman left-hander Garrett Schmeltz tossing two scoreless innings and striking out 3 Pirates batters.

Next up, the Cards will resume play against #10 East Carolina tomorrow at 3pm in game 2 of the Louisville Super Regional. With a win tomorrow, they will advance to their 5th College World Series appearance in program history. A loss will force a decisive game 3 on Sunday at noon.