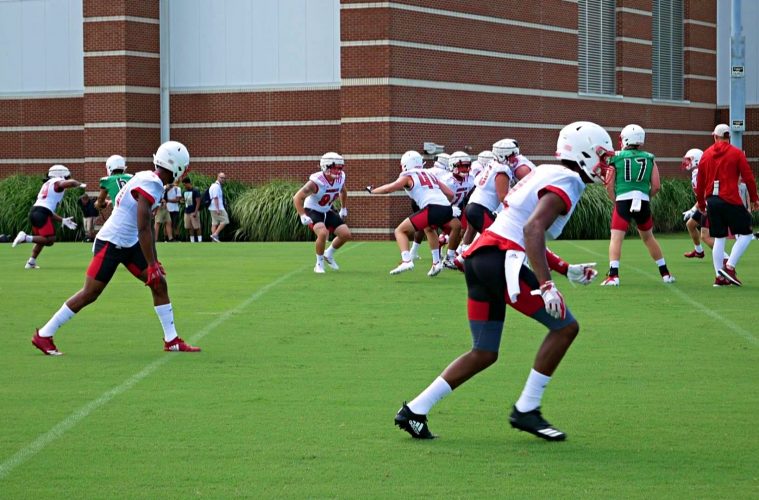 Less than four weeks away from its season opener, the University of Louisville football team hit the practice fields on Sunday for the first time at the Howard Schnellenberger Football Complex under the direction of head coach Scott Satterfield.

Satterfield split the team into two different groups to allow the newcomers to get accustomed to practice and get used to the pace, and give players more repetitions.

“Day one is always…everyone is so eager to get out there and that was the case today,” Satterfield said. “We split the practices on these first two days so everyone is able to get reps even though that some guys might not be ready for reps.”

The Cardinals enter the Satterfield era looking to rebound from a disappointing 2018 season, and the first-year head coach was encouraged by the intensity and the team’s ability to work.

“We weren’t out there very long today,” Satterfield said. “It was a huge difference out there today, especially on defense. They were flying around and understood what the coaches wanted. Both groups did a great job. It was good work today, but I think we will be better on day two.”

Louisville opens camp with 17 starters returning, but Satterfield isn’t worried about his front-line players. With some of his numbers down at certain positions, he’s trying to establish some depth over the next three weeks of camp.

“We have a lot of work to do,” Satterfield said. “We knew this from the spring that establishing depth was going to be key for us. I think when we put some of our first units out there that they will be pretty solid. However, that next unit that comes in, will it be a drop off?  That’s what we have to develop, those next guys. We will get dinged up over the course of the year, but developing quality depth is the thing we have to do.”

Junior Dorian Etheridge, a two-year starter at linebacker, saw that things were moving at a rapid pace for the newcomers, but was encouraged by what he saw from both group out there on Sunday.

“It was chaos out there at times,” Etheridge said. “Things were moving so fast, especially for some of the newcomers. It was going pretty fast for them, but they adjusted. It gave us an opportunity to get more reps, which at this point of the season is a benefit to our growth.”

Coming out there with temperatures in the 90s, the Cardinals looked equipped to handle the heat thanks to a rigorous offseason program under the direction of Mike Sirignano, the team’s strength and conditioning coach.

“It was great to be back out there,” junior offensive tackle Mekhi Becton said. “We were fresh out there, and I was able to move a lot easier out there today. I felt faster and felt quicker. It made us a whole lot more excited to get out there.”

The Cardinals return to split practices on Monday morning at 11 a.m. Louisville will open the season at Cardinal Stadium against Notre Dame on Monday, Sept. 2, in front of a nationally televised audience on ESPN.