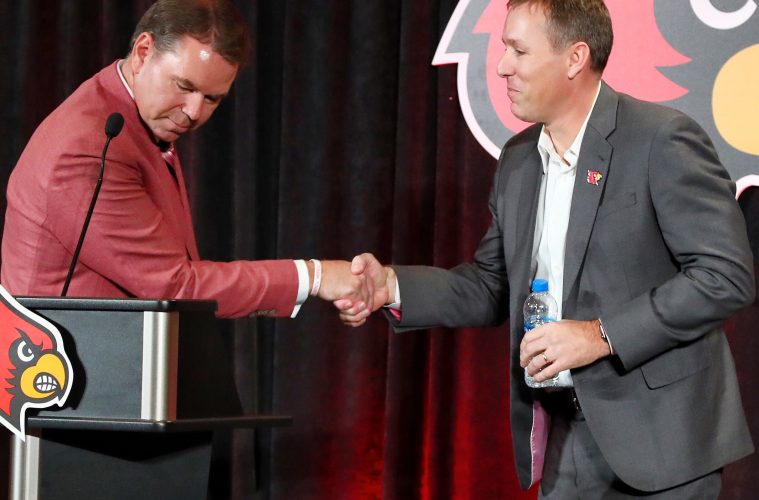 The whirlwind for University of Louisville head football coach Scott Satterfield continued when he officially took hold of the position on Wednesday.

After being named in a press conference on Tuesday, Satterfield, who guided Appalachian State to a 51-24 record in six seasons, went to work as the 23rd head coach of the Cardinals.

“Another busy day today,” Satterfield said. “I got into the office and started to look at the roster, started looking at the recruiting board, trying to figure out what our needs are and what direction we need to go into and also had discussions about staffing.

Obviously, one of the few objectives for Satterfield is to get some help with his new endeavor. The 45-year-old coach is flying solo these days as he looks to fill out his staff quickly to assist in turning around the UofL program.

“We’ll get some of those guys that are on our staff back at Appalachian State and we’ll also go outside and get some guys that are doing some amazing things right now across the country,” Satterfield said. “Hopefully, in the next week, week and a half, we’ll have most of the staff filled out and maybe a couple spots that will not be. But, most of them will be in the next few weeks.”

Filling the roster will be the difficult part, as the Cardinals graduated only 11 seniors, limiting the number of additions who can be added to the roster and get the program headed back in the right direction.

“We’re going to try to get the best talent we can get throughout this blueprint of recruiting,” Satterfield said. “There’s a lot of guys out there that have reached out that are interested now in Louisville that are maybe committed to other schools that we’re going to have to play.

“We’re just trying to find the best fit. I’m trying to find a well-rounded student-athlete, not just somebody who can run fast or hit. We want someone who is going to do well in academics, that’s going to be a strong character in that locker room when we do face adversity. So you’ve got to do your research, you’ve got to really dive deep into what makes them tick. I think so much of it is heart.”

With a heavy emphasis on recruiting to fill needs on both sides of the ball, Satterfield will spend some of his time evaluating the current state of the roster, which has 23 players returning who started at least one game in 2018.

“What I’ll probably do is just look at some cutups, meaning we’ll take some certain clips of guys and kind of see that,” Satterfield said. “I don’t need to look at game video, per se. The games we can’t get back. Really to find out personnel, we can just look at individual tapes of those guys. Good, bad plays and kind of see their skill sets and kind of get a gauge on where we might want to put guys.”

Having not seen much of the Louisville roster from last season, Satterfield was able to recognize there is potential in the program as he takes over the program coming off one of the most disappointing seasons in school history.

“I think we’ve got some good skill players,” Satterfield said. “You look at wide receiver, there’s some guys out there that can make some things happen at wide receiver. I think we have a couple of good running backs that could certainly make some things happen. And I think in the secondary there are some good players. I haven’t really jumped into the full roster, watching film and all that as much as I would like and I will do as we move forward, but there’s certainly some guys that will be able to make plays for us.”

The Cardinals are scheduled to have their first recruiting weekend with the new regime on Dec. 14-16.