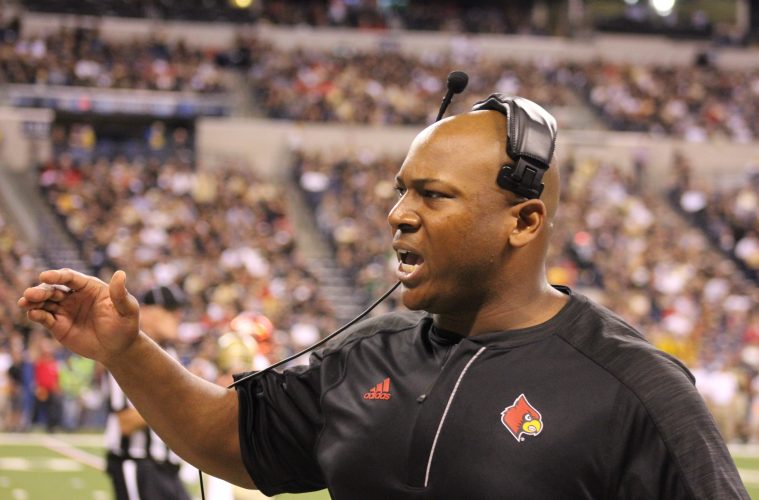 The University of Louisville football team is becoming less and less a fan of the ‘two is better than one’ mantra.

For the second-consecutive week to begin the season, the Cardinals’ defense is facing a familiar challenge: preparing to see potentially two different quarterbacks in a game. Louisville opens its ACC schedule on Saturday at North Carolina, which trotted out Chazz Surratt and Brandon Harris as its signal callers in a season-opening loss to Cal.

The Tar Heels’ duo combined to go 25 for 44 in the air, with one touchdown, while rushing 21 times for 71 yards and one score.

Fortunately, Louisville understands the importance of film study for this type of situation and it worked to the Cardinals’ advantage last week. Louisville beat Purdue 35-28 to improve to 1-0, with the defense recording four sacks and three interceptions. Not to mention, the Cardinals’ unit tallied seven quarterback hits.

“As a group, we played pretty well,” defensive line coach LD Scott said on Wednesday. “We got four sacks. I think we handled their run game pretty well. That wasn’t really their plan. When they did try to run it, we were right there to stop them. When the other guys got in, I didn’t see a big difference. I think we did OK. It was a good start.”

Though the Cardinals played a much tougher opener than most schools in the country, Louisville still was able to rotate in more than 20 players on the defensive side of the ball. That is expected to pay huge dividends this week, with a North Carolina team that is known to have an up-tempo style and the Cardinals’ likelihood of using plenty of substitutions.

“They want to get in as many plays as possible,” Scott said. “It’s very similar to the offense that Syracuse ran last year. We’re going to play a lot of plays. We understand that. We’re prepared for that, which is why we got quite a few guys in the game last week. I feel very comfortable doing that.”

Scott, now in his fourth season on staff, said the goal is to make sure his guys have plenty of energy come the fourth quarter.

One of the players Louisville will lean on is redshirt sophomore Jonathan Greenard. He was one of five players to have at least five tackles last week, with Greenard tallying a sack.

The Hiram, Ga., native performed in key moments for the Cardinals last year, including 1.5 tackles for loss against Florida State and Virginia, an interception at Virginia, and five tackles in Louisville’s bowl game against LSU.

“He’s Mr. Versatility for us,” Scott said Greenard. “He can play all four spots for us in any situation. Injuries were a crucial part of his development last season. He was able to play in some big moments and stepped up and made some really big plays as a redshirt freshman last year. He has our trust, and that’s why he’s a starter for us. We feel like he can get in there and make plays just like the guys in front of him.”

The Cardinals will need another solid performance from Greenard and the defensive unit, knowing the challenges that lie ahead and the opportunity for positive start in league play.

“We’re focused on both quarterbacks,” Scott said. “They’re a little bit different guys, and we know they like their running backs. They don’t have as much experience at the receiver position, so we’re really focused on which quarterback is in the game and how they want to run the ball.”