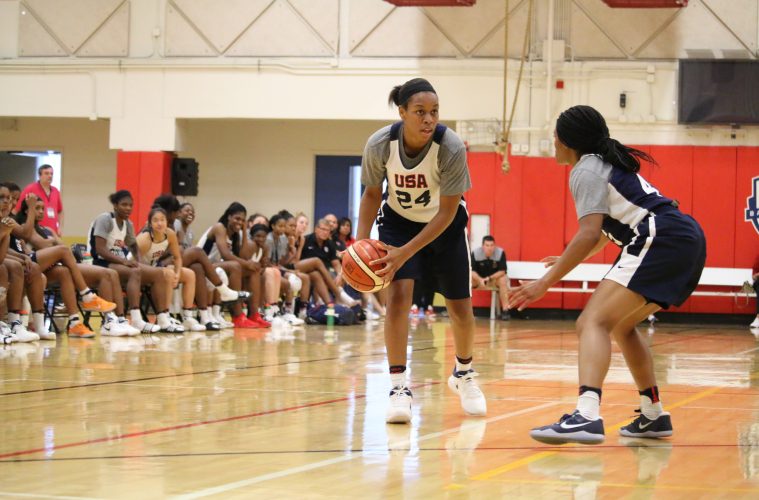 COLORADO SPRINGS, Colo. – University of Louisville junior guard Asia Durr is one of 30 athletes who have accepted an invitation to participate in the 2017 USA Basketball Women’s National Team training camp Sept. 30-Oct. 2 in Santa Barbara, California.

She is just one of five collegiate All-Americans who have been included among the training camp roster, which includes 25 WNBA players. Invitations were issued by the USA Basketball Women’s National Team Player Selection Committee.

“It means a lot to be able to continue to be a part of USA Basketball,” said Durr. “Every time I’m involved I am honored because I get a chance to represent my country.”

Joining Durr in Santa Barbara will be head coach Jeff Walz, who has been selected to assist head coach Dawn Staley (South Carolina) as court coach during training camp.

This marks Durr’s fourth stint with USA Basketball. In mid-August, she helped lead the U-23 National Team to a 3-0 record at the U-24 Four Nations Tournament in Tokyo, Japan. She led the team in scoring with 12.7 points-per-game and notched a team-high 16 points in Team USA’s 103-71 win over Japan in the finale.  Prior to her experiences in Japan, the Douglasville, Ga., native had already enjoyed two stints with USA Basketball that resulted in gold medals: the 2013 FIBA Americas U-16 Championship and the 2014 FIBA U-17 World Championship.  Last season, Durr became the school’s 28th 1,000-point scorer and broke the program’s single-season record with 119 3-pointers, while extending her school record for consecutive games with a trey to 39 contests. She finished the year with 692 points, an average of 19.2 per game – both marks that rank fourth in the school history.

“It’s a great feeling that I can’t even describe, to be able to compete with people that have been in the league (WNBA) for years,” added Durr. “This is another opportunity to compete against the best of the best. I’m so grateful to be invited.”

The camp will be utilized to help identify and prepare athletes for future USA National Team events, including the 2018 USA World Cup Team, and will mark the USA’s first training camp under Staley’s tenure as head coach.

The USA will train at 10 a.m. (PDT) daily, with sessions at Westmont College on Sept. 30 and Oct. 1. On Oct. 2, the USA National Team’s practice will be held at the University of California, Santa Barbara Recreation Center’s Robertson Gymnasium.

All but one athlete (Gray) has prior USA Basketball experience. Combined the participants own 95 gold medals, two silver medals and five bronze medals in official junior and senior level five-on-five competitions, as well as six gold medals and one bronze medal in international 3×3 events. The list is underscored by a total of 23 Olympic and 17 FIBA World Cup gold medals.

The USA Basketball Women’s National Team will compete in the 2018 FIBA World Cup (Sept. 22-30 in Spain) and, if the USA qualifies, the 2020 Summer Olympic Games (July 24-Aug. 9 in Tokyo), as well as additional USA training camps and exhibition games.

The U.S. and Staley first will look to capture the title at the 2018 FIBA Women’s World Cup of Basketball, with an automatic berth to the 2020 Olympic Games being awarded to the gold medalist. Should the U.S. not finish with the gold medal in 2018, it would have two additional opportunities to qualify for the Olympics: the 2019 FIBA AmeriCup (dates and site TBD) and the 2020 FIBA World Olympic Qualifying Tournament (dates and site TBD).

Based in Colorado Springs, Colorado, and chaired by retired Gen. Martin Dempsey, USA Basketball is a nonprofit organization and the national governing body for men’s and women’s basketball in the United States. As the recognized governing body for basketball in the U.S. by the International Basketball Federation (FIBA) and the United States Olympic Committee (USOC), USA Basketball is responsible for the selection, training and fielding of USA teams that compete in FIBA-sponsored international competitions, as well as for some national competitions, and for the development of youth basketball initiatives that address player development, coach education and safety.