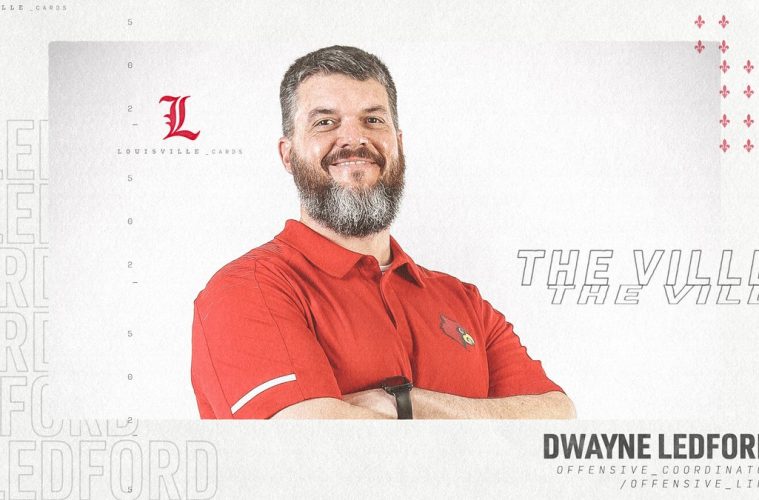 Considered one of the top offensive line tacticians in the country, Dwayne Ledford was named the offensive coordinator and offensive line coach at the University of Louisville, head coach Scott Satterfield announced.

“Adding a coach with the experience of Dwayne Ledford is a key addition to our offensive staff,” Satterfield said. “Dwayne’s one of the top offensive line coaches in the nation and has produced some of the best offensive line in the country during his career. His units are technically sound and his players play with great passion. This is an excellent hire in the development of our program.”

Ledford joins the Louisville staff after three seasons as the offensive line coach and run game coordinator at NC State, where he helped construct the Wolfpack’s offensive lines into one of the best units in the ACC.  Senior Garrett Bradbury was a consensus All-American earned Associated Press All-America honors and won the Rimington Trophy as the nation’s top center. Bradbury and left tackle Tyler Jones both made the All-ACC team this season. It was the first time since 1974 the Pack had two from the offensive linemen on the first-team.

In three seasons directing the offensive line, the Wolfpack saw their sack total decrease, ranking among the top 20 in the country. NC State ranked third nationally this season in sacks allowed, giving up just 0.75 per game, while they finished tied for fifth in 2017 and 20th in 2016. State also saw its sacks allowed dramatically reduced under Ledford. The Wolfpack allowed 39 sacks in 2015 and then 17, 13 and nine in the subsequent seasons. The Wolfpack led the ACC in the fewest sacks allowed in each of the last two seasons.

A two-time Broyles Award (2014, 2017) nominee, Ledford saw four of his five starters on the offensive linemen line earn All-ACC honors in 2017: Tony Adams, Bradbury, Tyler Jones and Will Richardson (2nd), who was drafted in the fourth round by the Jacksonville Jaguars.

Ledford’s group was one of the best, allowing only 13 sacks, which led the ACC and ranked second in the Power 5. The Wolfpack offensive line paved the way for back-to-back 1,000-yard rushers in 2016 and 2017, the first time in two straight seasons since 1977-78.

In 2016, an inexperienced offensive line (all but one of the starters was not available during spring practice) ended up ranking third in the ACC and 19th in the FBS in sacks allowed with 17 – the sixth-lowest tally in school history.

Ledford came to NC State after four seasons coaching the offensive line at Appalachian State, and three years as co-offensive coordinator for the run game.  The Mountaineers set a Sun Belt single season record with 11 wins in 2015, the team’s first full year of FBS eligibility, and have averaged 257.2 rushing yards per game over the past two seasons.

His offense ranked fourth in the FBS in sacks allowed in 2015 with just 0.85 per game, and paved the way for a 271.5 yard rushing average, ranking sixth nationally.  The Mountaineers were explosive on offense, scoring 44 points or more nine times in its last 20 games and three of his players were named to the All-Sun Belt first or second team.

Before joining the Appalachian State staff in 2012, Ledford spent one season as the offensive line coach and run game coordinator at Gardner-Webb. The Bulldogs ranked second in the Big South in rushing (165.6 yards per game) and third in fewest sacks allowed (17), finishing among the top 50 teams nationally in both categories.

Ledford’s first coaching job came while he was still playing in the NFL, as he served as a football strength and conditioning coach at North Carolina in 2005 and as an offensive line intern with the Frankfurt Galaxy of NFL Europe in the spring of 2006.

Following his playing career, he was named the Galaxy’s tight ends and tackles coach in the spring of 2007 before returning to the U.S. to serve as the offensive line coach at Sanderson High in Raleigh that fall. He spent two seasons as a graduate assistant coach at his alma mater, East Carolina (2008-09), working with the offensive line and guiding the Pirates to back-to-back Conference USA titles.

Ledford played defensive line at ECU from 1995-97, starting all 11 games as a junior and finishing with 26 career tackles. He moved to offensive line prior to his senior campaign and made nine starts at left tackle in 1998 and was named a 1998-99 National Strength and Conditioning All-American.

A recipient of ECU football’s Jerry T. Brooks Award for outstanding academic achievement in 1998, Ledford graduated from East Carolina with a degree in exercise and sports science in 1999.

A native of Marion, N.C., Ledford and his wife, Meredith, have two sons, Hudson and Jordan.