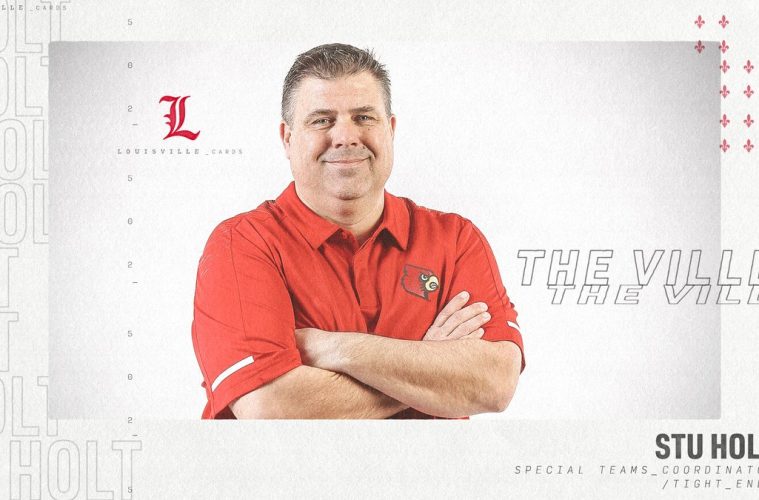 Stu Holt, a 22-year coaching veteran and one of the top special teams coaches in the nation, has been hired as the tight ends coach and special teams coordinator at Louisville, head coach Scott Satterfield announced.

“I’m excited that Stu will be joining our staff at Louisville,” Satterfield said. “The success that Stu has had throughout his career leading the special teams units at Appalachian State and South Florida, in addition to his experience on the offensive side of the football, will serve us well as we build our program at Louisville.

Holt’s running backs eclipsed the 1,000-yard mark in each of the last four seasons, including Darrynton Evans, who ranked in the top-20 nationally with 1,187 yards and averaged better than 6.6 yards per carry in guiding the Mountaineers to an 11-2 mark and their third straight Sun Belt title. Evans earned first team all-Sun Belt and third team all-purpose.

Punter Clayton Howell, who averaged 43.6 yards per punt, was named a freshman All-American by The Athletic.

In 2017 behind 1,037 rushing yards from running back Jalin Moore, the Mountaineers led the Sun Belt in rushing and ranked 22nd in the country by totaling an average of 223.6 yards per game – rushing for over 300 yards in each of their last three games, including 327 yards in the bowl win over Toledo.

As the special teams coach, Holt’s unit benefited from the kicking of Chandler Staton, who finished season 8-of-9 on field goals and 31-of-31 on extra points. Kick returner Ike Lewis ranked 15thnationally with an average of 26.1 yards per kickoff return.

In 2016, Holt mentored the Sun Belt Offensive Player of the Year in Moore and the program’s all-time leading rusher in Marcus Cox, who rushed for over 5,000 yards for his career. Moore and Cox combined to be one of the most productive tandems in all of college football, as they formed one of only three duos to average over 100 yards per game apiece during the 2016 season. App State was No. 10 nationally in rushing yards per game at 250.9 and led the Sun Belt in the category for the second consecutive year.

Under Holt’s leadership, freshman placekicker Michael Rubino enjoyed a sterling first year, going 13-of-13 from inside of 40 yards. Evans returned a kickoff for a touchdown in the Camellia Bowl win over Toledo.

In Holt’s initial season, the Mountaineers were led by Cox, who continued his record-setting career by finishing with 1,418 yards – good for 17th in the nation and third in the Sun Belt. Cox again topped national and conference rankings with 118.6 yards per game (13th national; 3rd Sun Belt) and all-purpose yards (132.2 yards per game), ranking second in the Sun Belt and 20th in the nation.

With Holt overseeing the ground game, Appalachian State finished No. 6 in the nation and second in the Sun Belt with 271.5 yards of rushing offense. The Mountaineers led the Sun Belt Conference in total offensive yards with 466.2 yards per game, good also for 20th nationally.

Holt made an immediate impact on the Appalachian State special teams, improving from 128th to 25th in efficiency from 2014 to 2015. Kicker Zach Matics was named first team All-Sun Belt after going 14-of-17 on field goals and drilling the game-winner as time expired to win the Camellia Bowl.

In 2013, Holt was nominated for the Broyles Award (National Assistant Coach of the Year) after USF’s special teams improved in nearly every statistical category despite the loss of its key performers.

Under Holt’s tutelage, USF’s special teams were ranked No. 3 nationally by ESPN Stats & Info. The Bulls led the American Athletic Conference and ranked No. 9 nationally in punt returns (14.44-yard average) and first-year place kicker Marvin Kloss was one of three finalists for the Lou Groza Award (national kicker of the year).

In 2014 Holt’s special teams unit continued be one of the team’s strengths, when punter Mattias Ciabatti set a school record with a 44.4-yard punting average. The first-team all-conference selection led the AAC with 22 punts downed inside the 20 and 18 boots of 50 yards or more.

Before going to USF, Holt spent eight of the previous nine seasons at Western Kentucky, first as running backs coach (2004-09) before coaching the tackles/tight ends coach (2011-12). He also coordinated the Hilltoppers’ special teams in 2005 and 2009 before one season at Tennessee State (2010), coaching the running backs.

In those seven seasons as a running backs coach, Holt has produced impressive ground attacks and individual rushers. His units ranked among the NCAA Division I FCS top 25 in rushing twice — 14that WKU in 2004 (226.2 ypg) and 24th at Tennessee State in 2010 (190.0 ypg). Additionally, he coached two 1,000-yard rushers at WKU (Lerron Moore and Tyrell Hayden).

Over the course of his career, Holt has coached 10 student-athletes that have gone on to play in the National Football League — Brian Claybourn, Jack Doyle, Mitchell Henry and Bobby Rainey at WKU, Ciabatti, Sean Price (TE), Kloss and Mike McFarland at USF, Wake Forest All-American Steve Justice at New Smyrna Beach H.S, and Marcus Cox at Appalachian State.

Holt and his wife, Kim, have three daughters — Payton, Maggie and Ann Wallace.