Kicking It This Weekend; Louisville Soccer

If you missed Friday night’s roller coaster of fanatic emotions, I feel sorry for you.. First on the pitch, the women’s team shutout UAB 4-0 without a single shot on goal from the Blazers. Followed by a double OT shutout from the men’s team against the Butler Bulldogs.

(From go cards.com)
LOUISVILLE, KY. – Sophomore Gabrielle Vincent scored her first career hat trick to lead the Cardinals to a 4-0 win over UAB on Friday night in Lynn Stadium.  The Cardinals improve to 2-0-1 on the season while UAB falls to 1-2-0 on the year.

The Cardinal defense held UAB without a shot,  finishing the match with a 32-0 shot advantage and a 17-0 corner kick advantage. . Daugherty finished with six saves while UAB finished with nine total saves.  Bucklin finishes with her second consecutive shutout.

The cards the hosted again on Sunday, this time the Toledo Rockets. 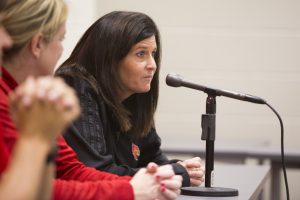 “In the first half I thought we looked good and then in the second half, I think the weekend caught up to us and the heat for sure caught up to us,” said head coach Karen Ferguson-Dayes.  “Just like Friday, today we were about to play a lot of players.  We are getting some significant minutes from our bench players and we are getting some great chances, I think we scored 22 seconds into the game.  Eight goals and two shutouts on the weekend was great.”

The Cardinals will be back in action on Friday, Sept. 2 as they host Kentucky at 7:30 p.m. in Lynn Stadium for the Battle of the Bluegrass. (Preview to come)
Men’s

(From go cards.com)
Louisville kicked off the 2016 season with a scoreless draw against Butler on Friday night at Dr. Mark and Cindy Lynn Stadium. The match, played in front of a crowd of 3,018 was the first of 10 home matches for the Cardinals in 2016.

This one was painful! Neither team had obvious control in the first half but the Cards became more aggressive by the second half. Standing on the sidelines listening to both coaches as they instructed their teams, Coach Lolla continuously called out to ‘DJ! Get up, get up!’ DJ, in reference to senior, Daniel Johnson. No he wasn’t laying down on the pitch (well maybe a few times) by means, it meant to get up into the offense and make a play.

The Cardinals finished the match with a 23-8 advantage in shots, including a 10-4 edge on-goal. The 23 shots for Louisville were the most since finishing with 23 attempts in a scoreless draw at Ohio State on Oct. 2, 2013. The Cardinals also had an 11-1 cushion in corner kick chances. 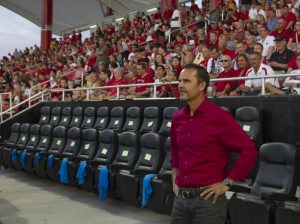 “I thought it was a good effort on our part. With it being the first game, it wasn’t as sharp as you’d like for it to be, but we knew we needed to be united in what we were doing and I thought, for most of the game, the team was connected and played connected,” said Louisville head coach Ken Lolla.
In his first outing with the Cardinals, graduate student goalkeeper Stefan Cleveland tallied three saves in 110 minutes of action in a shutout performance. Butler’s Eric Dick also registered a strong performance turning away 10 shots in his 110 minutes in the cage.

A lot of credit to be given to both goalkeepers. Stephan Cleveland and Eric Dick had zero room for error in this match as with one wrong dive and the victory could go the other way. Into the OTs, players cramping became a prevalent issue, one that will be addressed by Coach Lolla before tonight’s matchup, I’m sure. After the final buzzer of the shutout rang, both teams collapsed to the pitch in exhaustion.

Up next, the Cardinals conclude their two-game, season-opening homestand against Quinnipiac (Bobcats) on Monday at 7:30 p.m., ET at Dr. Mark & Cindy Lynn Stadium.

Quinnipiac enters Monday’s matchup at 0-1-0 on the season after dropping a 2-0 decision at ACC foe Boston College on Friday night. Last season, the Bobcats were 2-11-6 overall and finished 10th in the 11-team Metro Atlantic Athletic Conference. Under the guidance of 12th-year head coach Eric De Costa, Quinnipiac was picked to finish seventh in the MAAC in 2016 by the conference’s head coaches.