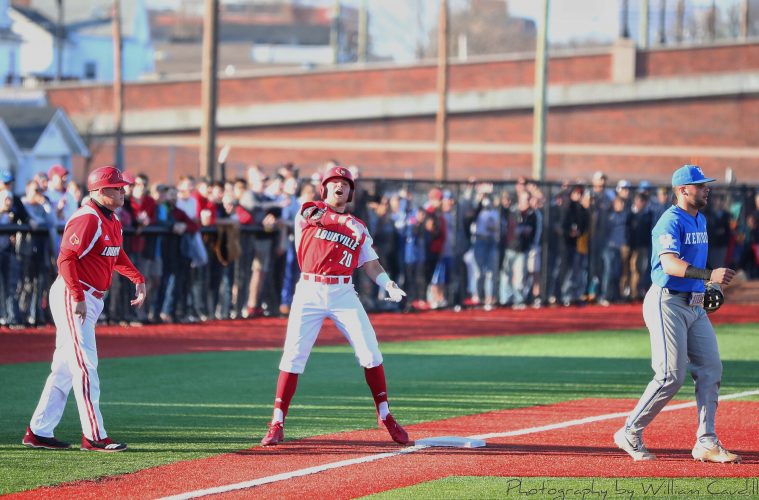 Coming off of their first road series loss of the season, the #7 Louisville Cardinals (28-8, 13-5) posted their 4th undefeated week of the season, but this time it came with the biggest long term repercussions of the season thus far. After dealing with the Northern Kentucky Norse (8-27) in the midweek game, Louisville rode the momentum all the way to Raleigh where they swept the #2 NC State Wolfpack (29-8, 12-6) to reclaim the Atlantic Division throne.

The offense was red hot all week long, batting .359 and posting 45 runs on a whopping 56 hits, including double digit hits in all 3 games against NC State and double digit runs in 3 of the 4 games this past week. Their clutch hitting was especially on display, as they batted .339 on the week with runners in scoring position and .298 with 2 outs. The NC State series featured even more impressive numbers, with the Cardinal Nine batting .370 and .342 in the same respective categories. Lucas Dunn has blossomed since he returned to the lineup from injury, and freshman Alex Binelas has been yet another freshman who has played a major role at the plate for the Cardinals.

As expected, the pitching staff had a bit of a speed bump this week with the increase in competition faced. While they collectively surrendered only one run int he midweek game, they averaged 5 earned runs per game against NC State on 24 total hits for the series. However, they did retain their impressive strikeout numbers, posting double digit strikeouts in all but the NC State series finale. The starting rotation was the best unit of the pitching staff, as Reid Detmers & Nick Bennett both tossed 8 strikeouts and Bobby Miller kept the Wolfpack scoreless for 5.0 innings.

Now that Louisville has reclaimed their spot atop the ACC standings with the tiebreaker against the second best team in the conference, they have now gathered themselves put themselves in a position to go on a major run towards the postseason. Pitching is still striking out a ton of batters, the offense is getting men on base with the power hitting slowly getting better, and it always helps to have two-time Coach of the Year Dan McDonnell in your corner. With all the pieces clicking, all that’s left for the Cards to do is just stay focused and take the remainder of this season one game at the time, starting with a trip behind enemy lines to Lexington, Kentucky to conclude the Battle of the Bluegrass.

Coming up this week, Louisville will head to Lexington for the road version of the Battle of the Bluegrass against the Kentucky Wildcats (20-16), then come home for a weekend conference series against the Miami Hurricanes (25-12, 10-8).

Louisville will start the week on the road for the midweek game, then come home for the weekend series. The three game weekend series will begin on Thursday and end on Saturday, due to Sunday being Easter Sunday.

Adjusting the ticketed entry plan first featured last season, 17 of this season’s 34 home games will revert back to free entry. This week, all three games against Miami will charge admission. Tickets can be purchased here. In case you cannot make it to any of the games, all 3 games against Miami will be televised on ACC Network Extra and broadcast on 93.9 The Ville. The game against Kentucky will be televised on SECN+ and broadcast on 93.9 The Ville.

Since their first meeting two weeks ago, Kentucky has slowly gotten a tad better despite only going 4-3 since April 2nd. They were able to steal a game from a top 25 RPI team at Missouri, and were actually able to outright win the road series against #17 Ole Miss. While they only plated 3 runs in their first meeting with the Cardinals, don’t be surprised to see the Wildcats plate more than that in their own ballpark. They own a 13-6 record at Kentucky Proud Park, with all 4 of their double digit run games taking place in Lexington. The top of their lineup remains just as big of a threat as ever, with TJ Collett, Coltyn Kessler, Jaren Shelby and Ryan Shinn combining to bat for .301 with 25 home runs (64% of team total) and 99 RBIs (56% of team total). But like last time, UK still is struggling to get meaningful production out of the bottom half of their lineup. If midweek starter Luke Smith can limit the amount of damage causes by the 1-4 hole, he’ll be in decent shape in a hostile road environment.

Playing into Louisville’s favor however is the fact that Kentucky’s pitching staff outside of Zack Thompson is still not doing a great job. Midweek starter Mason Hazelwood is still a viable midweek starter with a 1.75 ERA and a strikeout-to-walk ratio of 28-11, but the key in this game is the same as it was in game 1: force UK to go to the bullpen early. Of their 12 main arms in the bullpen, 7 of them have an ERA of 4.30 or above. Cole Daniels remains their best relief option with an ERA of 1.64, but the fact that a setup man is their best reliever doesn’t speak very well to the depth of the pen. Even though they will be on the road, expect Louisville to get their fair share of run, especially with the streak they’ve been on as of late.

If there’s any way to describe Miami’s offense, it would be “consistently inconsistent”. However it’s not for a lack of production at the plate. The Canes have one of the most underrated offenses in the league, as they lead the ACC in batting average at .296 and are third in hits at 378. Where that description fits is their lack of consistency in the bottom of the order as far as their lineup goes. Only 6 players have made appearances in at least 75% of their games, but those 6 do put up some solid numbers. 5 of the 6 post batting averages of .300 or better, 4 of them racking up 74 or more total bases, 4 tallying 35 RBIs or more and 3 with double digit doubles and 6 or more home runs. Sophomore infielder Raymond Gill leads the Canes offense with a .372 batting average and .651 slugging percentage (best on team), and an on base percentage of .445 (second best). Fellow infielder Alex Toral is the Canes’ version of Adam Dunn, as he leads the team in home runs with 14 and is third in walks, but is also subsequently the strikeout leader of the Hurricanes ball club with Gill right behind him. If Reid Detmers and Co. can continue to post the strikeout numbers that they have all season, they will significantly limit the amount of runs surrendered in the series.

In terms of the ACC, the Hurricanes have a sneaky good pitching staff. While they rank just 7th in the ACC in hits allowed, Louisville is the only ACC team with a better ERA than the Canes. They do a very good job at not allowing too many hits per inning and not giving up a ton of runs, as they have only allowed 8+ runs in a game 7 times this season. They have a healthy balance between starters and their bullpen, with there being only 2 starts outside of their normal 1-4 rotation. Their weekend rotation guys are all starters who can toss strikeouts like it’s going out of style, with all three tossing at least 53 strikeouts. Right-handers Brian Van Belle, Evan McKendry and and Chris McMahon will all give up their fair share of hits and runs with a collective ERA of 3.84, but it is feast or famine with this crew. Top combat the ERA of nearly 4.00, they collectively have struck out a whopping 170 batters and only allowed 46 walks. Even with the tear Louisville has been on recently at the plate, chasing these guys out of the game will be no easy task. It also doesn’t help that Miami has one of the best relievers in the ACC with Greg Veliz. The right-hander sports a decent ERA of 2.64 over 30.2 inning pitched, but also carries an impressive strikeout-to-walk ratio of 51-19.

I predict that after sweeping the season series against Kentucky by winning in Lexington in the midweek game, Louisville will follow that performance up with a conference series win against Miami for the weekend home series.