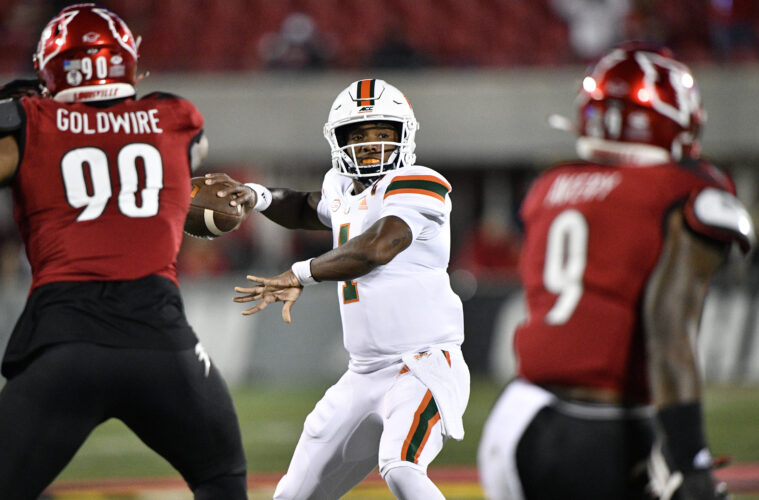 The University of Louisville Football team hosted College GameDay on its campus for the 3rd time in program history on Saturday for the #17 vs. #18 match-up against the Miami Hurricanes. The Cards fell 47-34 before a COVID-reduced crowd of 12,120 (sellout).

Things started off well enough for the Cards. Louisville was able to get a sack of D’Eriq King and forced a punt. Subsequently Louisville drove the ball 58 yards and was able to connect on a 40 yard field goal and led the game briefly 3-0.

Miami put on a clinic at the tight end position. Combined between Brevin Jordan and Will Mallory the tight ends had 8 catches for 137 yards and 2 Touchdowns. Much of this occurred in the 1st half. Thankfully one other huge gainer was called back due to penalty.

Miami did a nice job of spreading out UofL’s defense, but D’Eriq King didn’t challenge UofL’s cornerbacks very often…. and he didn’t need to. Louisville’s linebackers and safeties made the job easy in the passing game.

COVER THE RUNNING BACK (Back to Back Touchdowns)

The main back breaker came after Louisville returned from halftime and IMPOSED ITS WILL with Javian Hawkins on a 7 play, 75 yard Touchdown drive that made the game 20-13 and reachable for Louisville after a dreadful 1st half offensively.

But then Cam’Ron Harris got the corner on play #1 for Miami in the 3rd quarter and it was 75-yards the other direction. Yaya Diaby and Yasir Abdullah & Isaiah Hayes were the responsible parties giving the edge and allowing the 75-yard lane.

And then Louisville answered again. This time with an 11-play, blue collar drive highlighted by two Tutu Atwell catches that pulled Louisville within 7 again……

And then Isaiah Hayes just completely lost running back Jaylan Knighton (a 4-star RB with offers from everyone under the sun) for a completely wide open pass from D’Eriq King. For another 75-yard score.

Louisville’s Defense can not have busts like that. It just can not happen.

Louisville hurt itself on 3rd down all evening, going 4 of 14 on 3rd down in the game offensively and allowing Miami to go 6 of 13. But Miami really didn’t need 3rd down… or time of possession (which Louisville dominated). Because when the Canes needed a score, they got it quickly.

Miami just had one 3 and OUT on the evening. The Canes scored on 9 of 13 drives… 1 of those 13 drives ended the game with Miami kneeling. 3 punts were forced.

Louisville Football has allowed double digit Tackles For Loss in 4 straight games for the first time in history. TFLs have been tracked since 1985.

The Cards compiled 516 yards against Miami and the Canes gained 485. It was the 2nd consecutive year that Louisville would outgain Miami (UofL 496, UM 449 in 2019) …. and UofL managed to lose both games. Why?

When a kicker gets a sundial play clock to set up for a 57-yard field goal and makes it…. you know it’s not going to be Louisville’s night. Each time UofL had done the hard work to get back into position another assignment would get blown. It wasn’t UofL’s night. It didn’t go their way. There were too many mental mistakes, not enough discipline and Louisville probably has to solve some of this in recruiting…. or play some of the younger players. Particularly at safety.