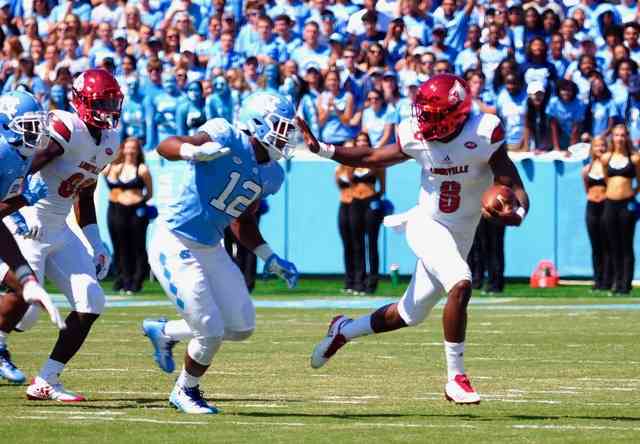 Jackson, one of the league’s two offensive backs of the week, totaled 525 yards of offense and six touchdowns to lead the Cardinals (2-0) to a 47-35 victory at North Carolina on Saturday. With his performance, Jackson became the second player in FBS history to record at least 300 passing yards and 100 rushing yards in consecutive games.

The junior and reigning Heisman Trophy winner has dazzled the college football scene in his first two games of the year. He surpassed 1,000 yards of total offense with his performance against North Carolina. He has achieved the feat in consecutive seasons and is one of only two players in FBS history since 2000 to reach the 1,000-yard plateau.

Smith has been just as impressive, being named the ACC Receiver of the Week after his performance against the Tar Heels. He had career highs of nine catches and 183 receiving yards, including a career-long 75-yard touchdown that provided the Cardinals a 20-14 lead at halftime.

The fellow junior, who recorded his second straight and third overall 100-yard receiving game, has 300 receiving yards this season. It is the most by a UofL receiver in the first two games of a season, surpassing 251 by Harry Douglas in 2007.

No. 14 Louisville returns to action on Saturday in its home opener, facing reigning national champion and No. 3 Clemson at Papa John’s Cardinal Stadium in a ‘Blackout’ at 8 p.m.

Earlier that day, Louisville will play host to ESPN’s College GameDay for the second time in as many seasons. The show will broadcast live from the oval in front Grawemeyer Hall on UofL’s campus.