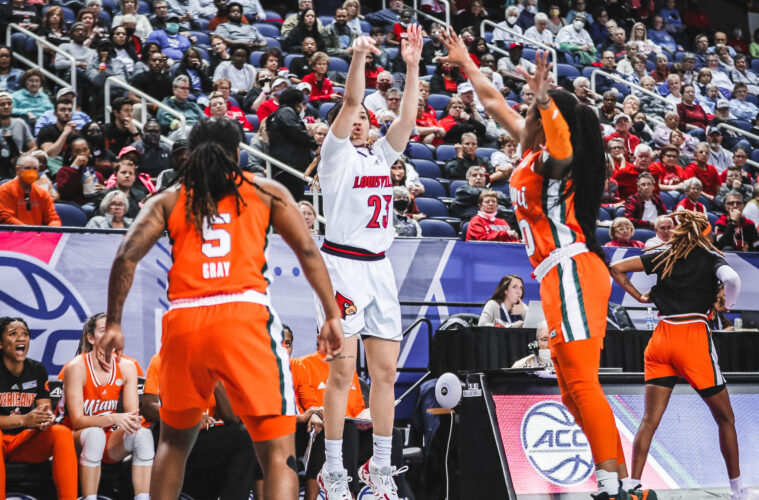 Heartbreaking Loss For No.4 Louisville In ACC Quarter-Finals

This one hurt. This was an “All Too Well” kind of pain. This is one we will never forget.

Louisville was leading 59-44 with 5:44 left to play when Miami suddenly found a spark that turned into a wildfire in the form of a 17-0 run. Now admittedly, the Cards played sloppy through most of this game and let Miami stay in it way too many times. Outside of the third quarter, Louisville really didn’t have the best night. Emily Engstler had 0 first half points and Kianna Smith had just 2 points in the first half. It was Chelsie Hall who led the team in scoring tonight with 13 points. In fact, Chelsie and Kianna Smith were the only athletes in a Louisville uniform who had double-digit scoring by the end of the night. The Cards simply had no answer for Destiny Harden who had 27 points tonight including the three-pointer to tie the game and a midrange jumper to win the game at the buzzer for the Hurricanes.

What does this mean for Louisville going forward? They’ll be watching the remainder of the ACC tournament from home while Miami advances to the semi-finals to face either Notre Dame or Georgia Tech. It also means their #1 seed in the NCAA tournament is on the line. We’ll find out exactly where they land when brackets are revealed on March 13th. The good news we can hold onto is that even with a #2 seed, the Cards will still host their first two NCAA games at the Yum! Center.