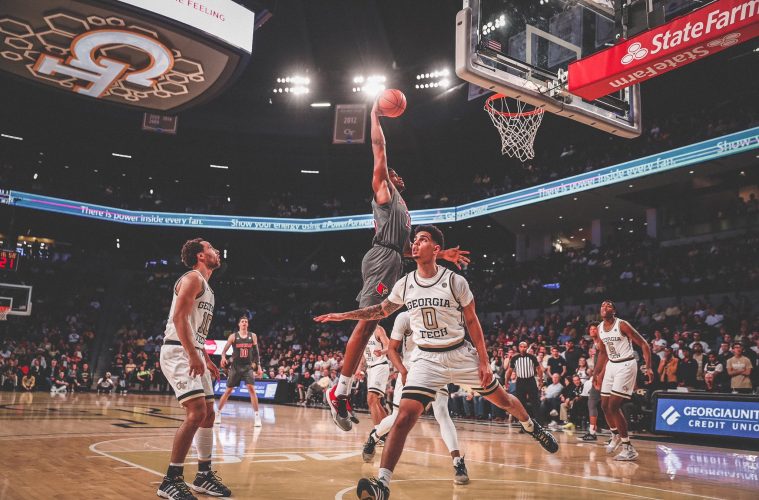 The Louisville Cardinals traveled to Atlanta to face the Georgia Tech Yellow Jackets and fell 64-58. The Ramblin’ Wreck led for 39:35 of the 40:00 game and jumped out to a big lead that Louisville worked to mitigate throughout the contest. The slow start wasn’t insurmountable, but the Louisville Cardinals (who entered the game shooting 40.3% from 3-point range) could only muster a 3-24 shooting performance from beyond the arc.

The loss gives the Cards its worst ‘bad’ loss of the season. Georgia Tech has a losing record at 12-13 overall (6-8 in ACC) and was #82 in the NCAA’s Net Rankings coming into the game. A road loss to the Net #82 is a Quad 2 (Q2) loss in the eyes of the NCAA Selection committee but it will be interesting to see how beating Louisville might move Josh Pastner’s team up the Net Rankings. A road loss to 1-75th is a Q1 so the Cards only need GT to move 7 spots (and remain there until the end of the season) for this loss to not hurt as much………. but it’s going to hurt.

Meanwhile Malik Williams and David Johnson both scored 16 points each and accounted for 32 of Louisville’s 58 points. Both players would foul out during the game and Johnson’s absence proved critical on UofL’s final possession as Fresh Kimble lost the ball and his balance and turned the ball over. Prior to Kimble’s final possession David Johnson had scored two consecutive buckets.

There were some officiating gripes as is typical of a Jaime Luckie crewed event. A goaltend, who GT’s Jose Alvarado said, ‘I’m going to be honest, I thought it was a goaltend.’ was reviewed and not granted to Louisville. A possession prior to that Malik Williams was whistled for a phantom foul that turned the ball over in a late-game critical situation. Ryan McMahon hit a 3 before halftime and it was discussed whether or not the clock had started prematurely………….. but BOTTOMLINE Louisville shot like hell tonight and came out of the gate tonight like a team really pleased with itself.