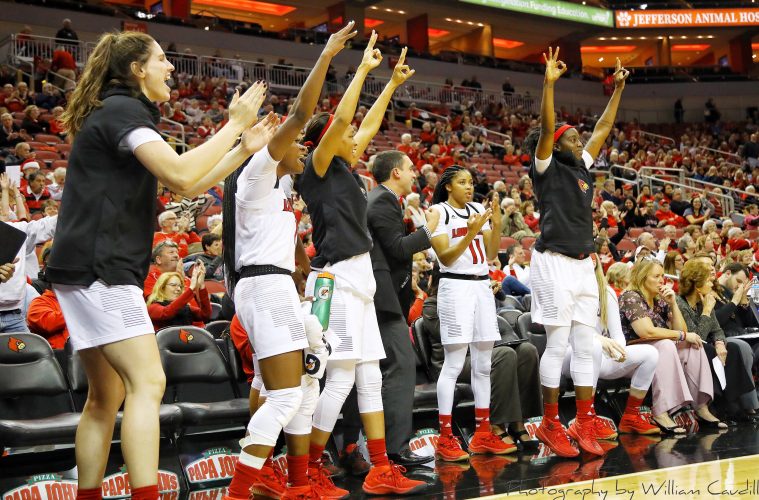 Six players scored in double figures as the fifth-ranked Louisville Cardinals toppled Miami (Ohio) 95-73 in its home opener at the KFC Yum! Center on Monday evening.

With the victory, the Cardinals improve to 6-0, while the RedHawks suffered their first loss and dropped to 4-1.

Kylee Shook led the Cardinals with 17 points and six rebounds. Asia Durr followed just behind with 16 points and led the Cards with seven boards. Dana Evans dished out six assists and registered 14 points. Rounding out the double-digit scorers were Bionca Dunham with 15 points and Jazmine Jones and Sam Fuehring with 10 apiece.

As a team, Louisville shot 51.5 percent from the field and recorded a season-high 16 steals. Dunham accounted for four of the Cardinals’ steals, while Durr contributed three.

Louisville’s defense was firing on all cylinders to start the game, tallying three steals on the RedHawks’ opening three possessions. The Cardinals were just as dominant on the offensive end, jumping out to an early 10-2 lead on a perfect 4-4 made field goals and a pair of free throws by Fuehring.

The Cardinals continued to build on their lead to take a 27-12 advantage after the first quarter. They shot 60 percent and tallied six steals, while holding Miami (Ohio) to just 25 percent shooting.

The RedHawks responded in the second quarter, converting on four of their first five shots to cut the deficit to 10. Despite 50 percent shooting by Miami (Ohio), the Cardinals held off the RedHawks with a 6-0 run over the final two minutes of the half to extend their lead to 46-28.

Louisville remained in control the rest of the way, sealing the 95-73 victory over the RedHawks and improving to 10-2 in home openers under Jeff Walz.

The Cardinals return to the KFC Yum! Center on Thursday for the ACC/Big Ten Challenge against Nebraska. Tip-off is slated for 7 p.m.