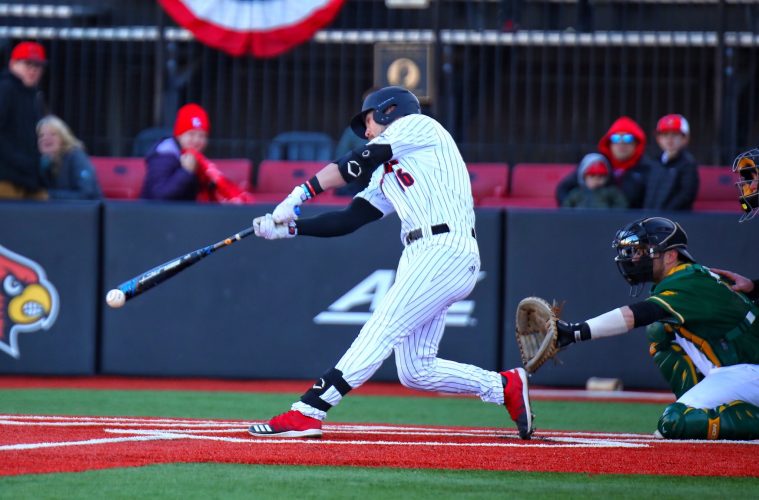 Baseball, the world’s most romantic sport in the world. It can make you laugh, make you smile, give you a thrill, and it can break your heart. Right now, it most certainly has me suffering from a broken heart. For the first time since 2017, the Cardinal Nine have lost three games in a row. The Cards lost their home opener against Wright State, 10-3. I’d like to first state that from this point on, I will never say anything in a preview piece about another team being “easy work”… this one is on me. I messed with the positive juju. Consider this my formal apology and let’s move on from past mistakes.

We saw Prosecky get the start today and I was comfortable with that decision. As a freshman, he could use the exposure and this is the time of year to start letting him get that experience. Things looked shaky through the first two innings and I felt like things would work themselves out. Once again in life, I was wrong. Louisville gave up four runs through the first two innings while only plating two for themselves. At this point I still felt ok about what was happening, Tim Borden had the first successful steal of 2020 and despite only scoring two runs, the Cards were still showing a lot of confidence. That quickly faded. By the fourth inning we would see our first of SIX pitching changes. Yes, that is correct. We saw seven different pitchers on the mound for Louisville in this game and no, not all of them were freshman. Michael Prosecky would finish his day after pitching four innings and recording 4 strikeouts, 4 earned runs, and giving up 6 hits. Things didn’t really improve from that point. Louisville would go on to give up 16 hits in their loss to Wright State.

Through 30 at bats we would only see the Cardinal Nine get 5 hits while leaving 8 runners stranded through all nine innings played. They did manage to load up the bases in the seventh inning with Britton up to bat. This is exactly what we needed.The score was 6-3 and this is what would make this game a close battle with the possibility of a come back win. When Britton grounded out you could feel a real energy change in what was happening on the field. The last ounce of energy Louisville had was now gone. Folks, it didn’t end well for the Cards. They would go on to give up 4 more runs through the last two innings. After 4 hours and 9 minutes of play, we saw Louisville lose their third game in a row.

This game should have been the one to help us bounce back from a rough weekend in Oxford so it was disappointing when that didn’t happen. At one point, I even remember saying “please make it stop” as Wright State scored another late game run. Yes, several of the guys coming out of the bullpen today are young. Yes, not having the talents of Alex Binelas and Lucas Dunn on the field hurt us. However, there were several times during this game where veteran players made crucial mistakes. I don’t think the pressure of having a #1 preseason ranking is getting to them. I do think that they need to work out all of the little kinks that are causing them to make these fundamental mistakes. This was an early season reality check and Dan McDonnell will not allow his team to continue performing the way they did against Wright State. Lesson learned, let’s move on from past mistakes.

All games will be aired on the ACCN.

Until then, I’ll be mending my broken heart. Go Cards!