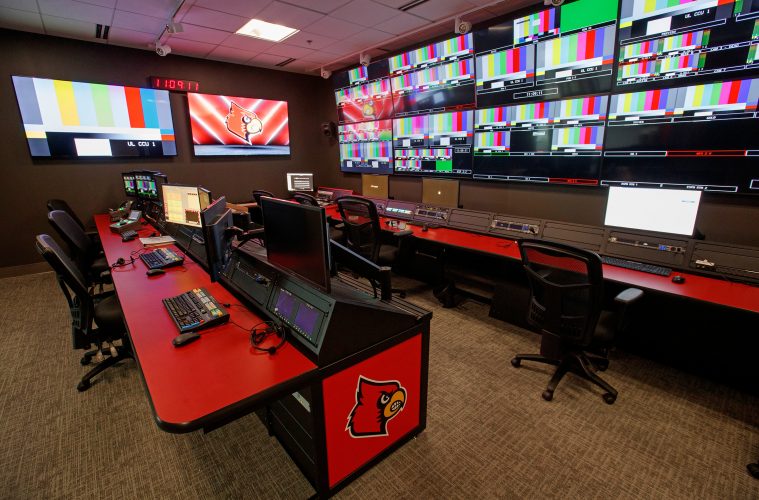 The University of Louisville Athletics Broadcast Center opened its doors for a grand opening event on Monday at the television production facility located on the northeast corner of the UofL campus on Arthur Street adjacent to Interstate 65.

The Atlantic Coast Conference and ESPN have partnered to launch the comprehensive linear and digital ACC Network in 2019.  With the network launch approaching, UofL built a television production facility to house all the equipment and personnel that is necessary to originate live programming.  Until the linear network launch, live programming will continue to be produced by UofL for ESPN networks or ACC Network Extra, a digital television platform.

The 7,850 square foot production facility was completed in September 2018 and is connected by fiber to UofL athletic venues and to ESPN.  Instead of mobile trucks covering sporting events, live programming will be originated from the new centralized production facility.

The $8 million project included construction, equipment and integration, and fiber connection to UofL venues.  The broadcast center includes two full video control rooms for linear telecasts which will air on ESPN, ESPN2, ESPNU or the ACC Network.  Those two control rooms and three additional scaled back control rooms allow for live telecasts of multiple events that may either overlap, or are concurrently played, to air on multiple television platforms.  Within the facility, over 2,500 wires with a total length of 38.6 miles are installed to connect the comprehensive electronic equipment used to produce the events.  There are 82 television monitors throughout the facility.  A total of 28 cameras available for field use: 10 primary, including four with 80x lenses; nine robotic; three POV; and six within the mobile production trailer.

With 576 strands of fiber connecting the broadcast center to venues, the center will also produce live, in-game content for UofL venue video boards such as those in Cardinal Stadium, Dr. Mark & Cindy Lynn Stadium, KFC Yum! Center, Jim Patterson Stadium, Ulmer Field and other venues.  The UofL Athletics Broadcast Center is connected by fiber to ESPN.

The production facility will include a bureau studio, which will allow coaches and players to do live interviews on any ESPN platform or broadcast channels.  Also included in the center is a versatile studio with variable sets and a full green screen wall, as well as work space for personnel.  The Cardinals also maintain a television production mobile unit for venues that are not connected by fiber to the broadcast center.

The broadcast center is staffed by a full-time crew of four and nearly 100 freelance and student workers that contribute over the course of the year.  Two additional full-time staff members will be added next year before the launch of the ACC Network.