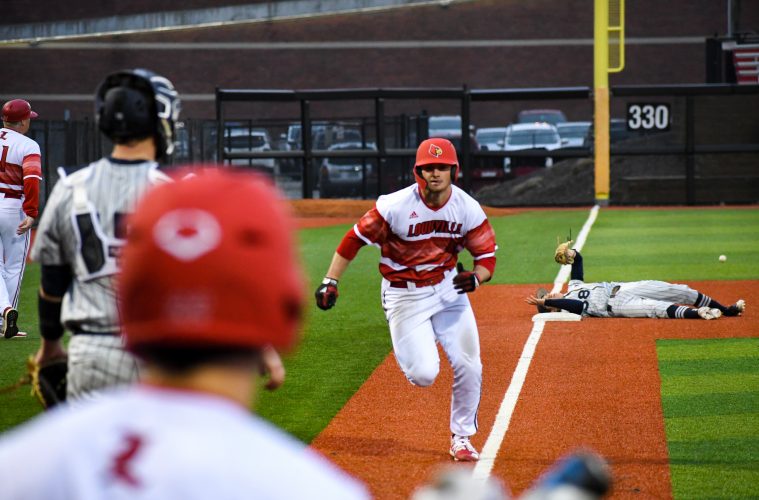 The Cardinal Nine secured their fourth win in a row today when Michael Prosecky got the start against Xavier in a midweek matchup. He was looking to redeem himself from last week’s loss against Wright State. Xavier quickly loaded the bases in the top of the first after back to back to back singles and had no outs. Luckily the Cards got out of the top of the inning only giving up one run to Xavier. Billy O’Connor got tossed from Jim Patterson for the second time in three years on the fifth batter of the first inning. He’s more dramatic than my two year old godson when you tell him he can’t have cookies for dinner. Metzinger would lead off with a single in the bottom of the first. He was able to advance to third after a couple of errors from Xavier on a pickoff attempt and would go on to home after an RBI from Danny Oriente. An RBI single from Masterman would send Britton home and allow Louisville to take the lead in the first.

The second inning went by quick and scoreless for both the Cards and Xavier. Louisville went down in order in the third inning but Prosecky had his second scoreless inning in a row. His luck would run out in the top of the fourth when the leadoff batter would hit a home run to tie the game. A bare hand catch and throw from Lavey would give Xavier their first out of the inning and the side was retired not long after. Levi Usher continued to show off his speed with a stolen base (he’s 6/6 this season) early in the game and beating a throw to first in the bottom of the fourth. This guy is quick and he’s not slowing down any time soon. An inning ending double play would leave runners stranded on first and third for Louisville.

The top of the fifth would bring a pitching change for the Cards with Glenn Albanese. A double off the wall would run another one in for Xavier helping them reclaim the lead, 3-2. Xavier quickly got another runner home extending their lead 4-2 while having just one out. A fastball from Albanese would get Louisville out of the top of the inning and give them the opportunity to plate a few runs in the bottom of the fifth. Lavey, who has struggled defensively this year missed a routine ground ball in the top of the sixth to give Xavier their fifth run of the game. It didn’t get much better for the Cards on offense leaving them scoreless in the sixth.

Adam Elliott came to the mound in the top of the seventh inning and would give Louisville their first 1-2-3 inning of the game. Louisville managed to get two runners in scoring position in the bottom of the seventh and a double from Oriente would send both runners home to make it a 5-4 game. Elliott would go on to throw another perfect inning in the top of the eighth putting Louisville back at the plate with the momentum. The Cardinal Nine were able to rally their way to a win in the bottom of the eighth when Usher singled home Leonard for the tie and then took the lead on an RBI fielder’s choice to send Brown home. Tim Borden II knocked one in on a double and an RBI from Oriente would seal the deal before Kirian came in to close the game for the Cards.

Louisville will host Western Michigan in a three game series this weekend.