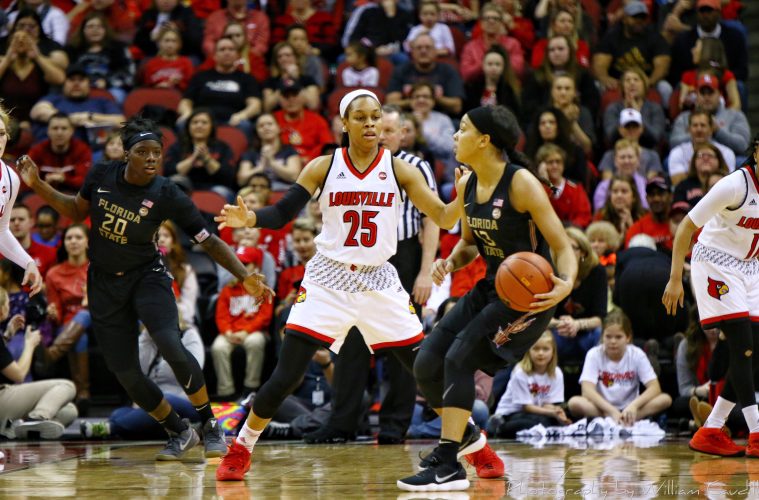 Fans can purchase $3 tickets to the game when they show their men’s basketball vs. Wake Forest ticket stub.

With 11 rebounds at Miami on Thursday, senior Myisha Hines-Allen became the second member of UofL’s 1,000-rebound club, with 1,009. She trails only Angel McCoughtry’s 1,261 career rebounds. She also joins McCoughtry as the only players in UofL history with 1,000 points and 1,000 rebounds.

She also added 26 points on 11-of-13 shooting in the win at Miami. It marks her second highest scoring game of the season, second to only the career-high 31 points she had against Notre Dame.

She has six double-doubles in her last 10 games, 10 on the season, and 39 for her career, which ranks second in school history.

In her last seven games, the Montclair, N.J. native is averaging 17.3 points and 13.3 rebounds.

Overall, Hines-Allen averages 14.7 points, which ranks second on the team and 14th in the ACC, and 10.5 rebounds, which leads the ACC and ranks 19th in the country. She also leads the ACC with 7.1 defensive rebounds per game.

Junior Sam Fuehring had a career-high 17 points on 6-of-7 shooting at Miami. She has scored in double figures in eight of her last 13 games, including five of her last six.

ABOUT THE DEMON DEACONS

Wake Forest enters Sunday’s matchup with losses in their last five games, but two of those losses have come in overtime, including a 81-79 loss to Florida State.

They are one of the better rebounding teams in the ACC, ranking fifth with 40.7 per game. Their 15.6 offensive rebounds per game rank third in the league.

Elisa Penna, who missed the first six games with an injury, leads the team in scoring with 14.9 points per game. She ranks second on the team with 26 3-pt field goals, while shooting 33 percent from deep. Amber Campbell (10.9) and Ariel Stephenson (10.3) join Penna as the Demon Deacons other double-digit scorers.