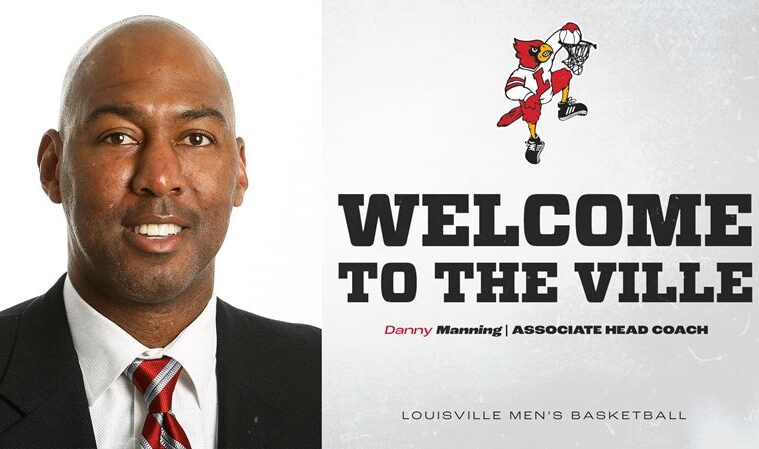 Danny Manning, who has served as a collegiate head or assistant coach for 15 years and is one of the premier players in college basketball history, has joined the University of Louisville men’s basketball staff as associate head coach under the Cardinals’ first-year head coach Kenny Payne.

Manning has nearly nine years of head coaching experience, having coached for two seasons at Tulsa (2012-14), six at Wake Forest (2014-20), and an extended period as interim head coach at Maryland last season (2021-22). He was also an assistant coach at Kansas for six years (2006-12), where he helped the Jayhawks attain the 2008 NCAA Championship.  He has guided two different schools to the NCAA Tournament and won a conference regular season and tournament title.  He worked as an analyst for ESPN during the 2020-21 season.

“Very rarely do you have an opportunity to hire a coach that encompasses all the experiences that a college basketball player goes through,” said Payne.  “I’m so excited and thrilled to bring a family member, a friend and a coach who has lived a special life as both a player and a coach within the culture I’m trying to establish.  Danny Manning is that and much more.”

Manning’s impressive basketball résumé includes being a member of the Collegiate Basketball Hall of Fame, a two-time first-team All-American, the No. 1 overall selection in the 1988 NBA Draft, a two-time NBA All-Star, 1998 NBA Sixth Man of the Year, an NCAA Champion as a player and as an assistant coach, a three-time Division I head coach and an Olympian.

“I am very fortunate, blessed and excited to be part of the City of Louisville, The University of Louisville, and Louisville Basketball with Coach Payne,” said Manning. “I have spent a lot of fun time watching the Louisville Basketball program dating back to the Metro Conference Tournament.  I have been fortunate to watch many people around basketball in my career. KP is someone that I have always admired for his work ethic, knowledge of the game, and passion for helping young men reach their dreams and doing things the right way. I am blessed that he has given me this chance to continue working with young men, impacting their lives on and off the court, and helping them reach their dreams. I am equally excited to work with Nolan Smith, as his father was a mentor to me and Kenny. Derek helped show me the ropes of high-level basketball.”

Manning most recently had become an assistant coach at Maryland in April 2021 before serving as interim head coach after then-head coach Mark Turgeon stepped down on Dec. 3.  Maryland posted a 15-17 record with seven quad 1 and 2 wins, including four top 25 wins after playing 18 games against teams in the 2022 NCAA Tournament. The Terrapins were 13-1 when leading with five minutes to play, with the lone loss coming at No. 3 Purdue.

After taking over a struggling Wake Forest program, Manning guided the Demon Deacons to a 19-14 record in his third season in 2016-17 and reached the NCAA First Four, their first postseason appearance in seven seasons. The Deacs were led by All-American John Collins, who was selected by the Atlanta Hawks with the No. 19 overall selection of the NBA Draft. Following the season, Manning received the Skip Prosser Man of the Year Award, presented annually to the nation’s top coach who had success on the court and showed moral integrity off of it. Fourteen players at Wake Forest went on to play professionally under Manning. Sixteen players made the dean’s list, and 29 players made a 3.0 GPA during their career at WFU. The team GPA of 3.05 was the highest in the program’s history.

Manning came to Wake Forest after spending two seasons as the head coach at the University of Tulsa. He was named the 2013-14 Conference USA Coach of the Year after leading the Golden Hurricane to the conference championship and the NCAA Tournament, Tulsa’s first appearance in 11 years. Manning was a finalist for two national Coach of the Year awards in 2013-14, including the Jim Phelan Award, given to the nation’s top coach, and the Ben Jobe Award, given to the nation’s top minority coach.  Manning posted a 38-29 (.567) overall record during his two seasons at Tulsa.

Before taking the reins at Tulsa, Manning spent nine seasons on the staff at Kansas, his alma mater. After retiring from professional basketball in 2003, he began his coaching career as a member of Bill Self’s first staff at Kansas as Director of Student-Athlete Development/Team Manager.

Manning was elevated to assistant coach in March 2007 and helped the Jayhawks win the 2008 national title in his first season in his new position. He also helped Kansas advance to the 2012 national title game in his final season in Lawrence.

In addition to coaching at the collegiate level, Manning has been involved on the international level with USA Basketball. In 2017, he spent the summer as an assistant coach on John Calipari’s staff of the U19 National Team. In 2018, he assisted Self with the U18 National Team. He previously served as a court coach during U18 National Team training camps.

At 6-10 and one of the top big men to ever play college basketball, Manning has earned a reputation as one of the best coaches of big men in the country. The latest example of his expertise with post players was John Collins, who, in two seasons with the Demon Deacons, went from ranked outside the top 100 in his high school class in 2015 to the No. 19 selection in the 2017 NBA Draft.  Manning has coached 15 NBA draft picks, including ten first-round selections and nine current NBA players.

Manning had a legendary playing career at the University of Kansas, where his No. 25 jersey is retired.  He is Kansas’ all-time leading scorer and rebounder, finishing his four-year career with 2,951 points and 1,187 rebounds. The No. 12 scorer in NCAA history, Manning was named a consensus first-team All-America selection in 1987 and 1988, the consensus College Player of the Year in 1988, and a three-time Big Eight Conference Player of the Year (1986, 1987, 1988).

Manning was named the 1988 NCAA Final Four Most Outstanding Player while leading the Jayhawks — dubbed “Danny and the Miracles” — to an 83-79 victory over Oklahoma for the 1988 national championship. He was also named the MVP of the NCAA Midwest Regional in 1986 and 1988.  Kansas finished 35-4 and advanced to the Final Four in Dallas in Manning’s sophomore year in 1986, a year Louisville would win the national title.

As a player, his Kansas teams prevailed against Louisville on three occasions — including twice during the Cardinals’ 1986 NCAA Championship season — while averaging 8.3 points and 3.3 rebounds in the matchups during his sophomore and junior years.  In a listing compiled in 2020, The Sporting News noted Manning as the second-best collegiate player all time since the NCAA bracket expanded.

Recognized for all of his accomplishments on the court, Manning was inducted into the National Collegiate Basketball Hall of Fame on November 23, 2008.

The Los Angeles Clippers’ No. 1 overall pick in the 1988 NBA Draft, Manning played 15 seasons in the league for seven different professional teams — the Los Angeles Clippers, Atlanta Hawks, Phoenix Suns, Milwaukee Bucks, Utah Jazz, Dallas Mavericks, and Detroit Pistons. He averaged 14.0 points and 5.2 rebounds per game during his NBA career, spanning 883 total games and 12,367 career points. Manning was a two-time NBA All-Star (1993, 1994) and won the league’s Sixth Man of the Year Award with Phoenix in 1998. During his playing days, Manning was a representative for the NBA Players Association. He is currently a member of the NBA Retired Players Association.

Manning won a bronze medal as a member of the 1988 USA Olympic Team in Seoul, South Korea. He also won a silver medal for the U.S. at the 1987 Pan American Games in Indianapolis, a team coached by former UofL Hall of Famer Denny Crum.

Manning was born in Hattiesburg, Miss., about 30 miles from the birthplace of head coach Kenny Payne in Laurel, Miss., and grew up in Greensboro, N.C.  He was named to the Guilford County Sports Hall of Fame in 2008. He played at Greensboro Page High School, leading the school to the 1983 state title at the Greensboro Coliseum, before transferring to Lawrence (Kan.) High School before his senior year. He is also a member of the Lawrence High School Hall of Fame.

In 2012, Manning was named one of the 35 Greatest McDonald’s All-Americans, celebrating the 35th Anniversary of the McDonald’s All American High School Boys Basketball Game.

Manning earned a Bachelor of Arts in Communications degree from the University of Kansas in 1991.