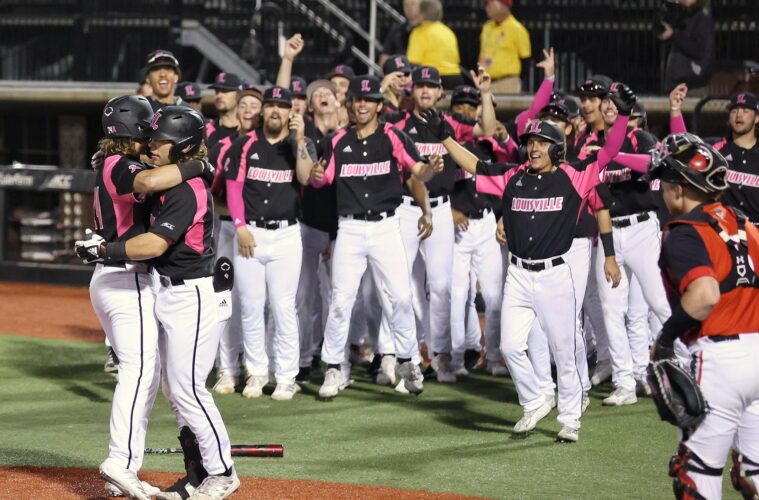 Louisville Offense Leads the Way in Win Over Cincinnati

The Cardinals picked up an 18-10 victory on Tuesday night.

LOUISVILLE, Ky. – It was an offensive night for the third-ranked University of Louisville baseball team as the Cardinals turned in an 18-10 victory over Cincinnati on Tuesday night at Jim Patterson Stadium.

Louisville (24-8) put 18 runs on the board, its most runs since scoring 20 and 22 runs in a doubleheader sweep of Akron on March 5. The Cardinals had double digit hits for the fourth consecutive game and 10th in the last 11.

Cameron Masterman recorded the first multi-home run game of his career on Tuesday, hitting a two-run shot in the third and again in the seventh to give him 12 on the year. Dalton Rushing and Levi Usher also left the yard for their 11th and fourth of the season, respectively.

Despite the final score, it was Cincinnati (13-18) that held the early lead after solo home runs in the second and third innings.

The Louisville offense finally went to work in the bottom of the third. Christian Knapczyk singled back through the middle to plate a pair and tie the game at two and Masterman’s first homer of the night gave the Cardinals their first lead.

Usher led off the fourth inning with an opposite field solo home run, kicking off a seven-run frame for Louisville. Knapczyk added another run-scoring knock and Ben Metzinger doubled in a run before Jack Payton drew a bases loaded walk.

Batting for the second time in the inning, Usher doubled in a pair of runs and Isaac Humphrey was hit by a pitch to force the seventh run of the inning home.

Cincinnati made things interesting with four runs in the sixth and seventh innings to pull back within two at 12-10, but Louisville answered back and put the game away.

Masterman’s second long ball of the night extended the lead in the seventh before Logan Beard and Humphrey picked up RBIs. Rushing then finished off the night with his two-run blast in the eighth.

Knapczyk finished the night 3-for-6 with three RBIs, his sixth three-hit game of the season. Masterman, Rushing, Payton and Usher turned in two hits apiece. Masterman drove in four on the night, while Humphrey and Usher each added three RBIs.

Ryan Hawks (4-1) earned his fourth victory of the season in his first collegiate start. Jacob Ferris pitched a pair of scoreless innings and Alex Galvan and Carson Liggett closed it out with scoreless frames.

Louisville heads on the road for the weekend with three games against Florida State in Tallahassee. The series gets started on Thursday night at 7 p.m. ET.