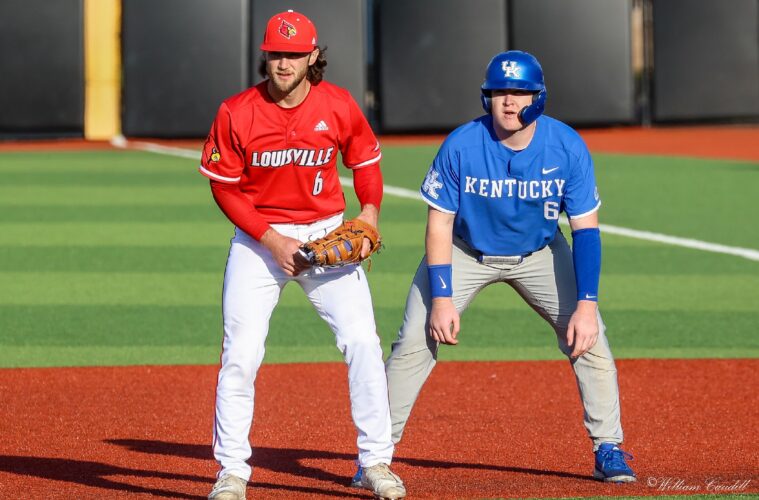 Louisville Takes Down Kentucky in Battle For the Bluegrass

It was a red night in the Battle of the Bluegrass on Tuesday as the 11th-ranked University of Louisville baseball team picked up a 4-2 victory over Kentucky at Jim Patterson Stadium.

The Cardinals managed just four hits on night, matching a season-low, but timely hitting proved to be the difference on Tuesday.

Cameron Masterman got the scoring started in the bottom of the first inning, going the other way for his 13th long ball of the season.

Louisville took advantage of some free bases in the third inning, getting a pair of walks and a hit by pitch to load the bases with two away. Jack Payton then delivered a two-run single on the first pitch he saw to give the Cards a 3-0 advantage.

Kentucky (21-16) finally broke through in the sixth, but the Cardinals limited the damage to just one run. Two walks and a single put a runner at every base with nobody out, but Ryan Hawks picked up a pair of strikeouts sandwiched around a sacrifice fly to keep Louisville in front.

Free passes pushed across another run for the Cardinals in the seventh, as Dalton Rushing drew a bases loaded walk with two down to stretch the margin back to three.

UK got the tying runs on in the eighth, but Michael Prosecky entered and put an end to the threat with a strikeout. The Wildcats then pushed a run across in the ninth with two outs and had the tying runs in scoring position before a groundball finished off the victory for UofL.

Eight different pitchers took the mound for the Cardinals on Tuesday, with Kyle Walter (2-0) tossing a scoreless inning for the win in his first career start. Carson Liggett, Tate Kuehner, Ryan Hawks and Kaleb Corbett each had scoreless appearances as well.

Louisville returns to conference play this weekend with a three-game set against No. 23 NC State. The series begins on Friday at 8 p.m. ET at Jim Patterson Stadium.