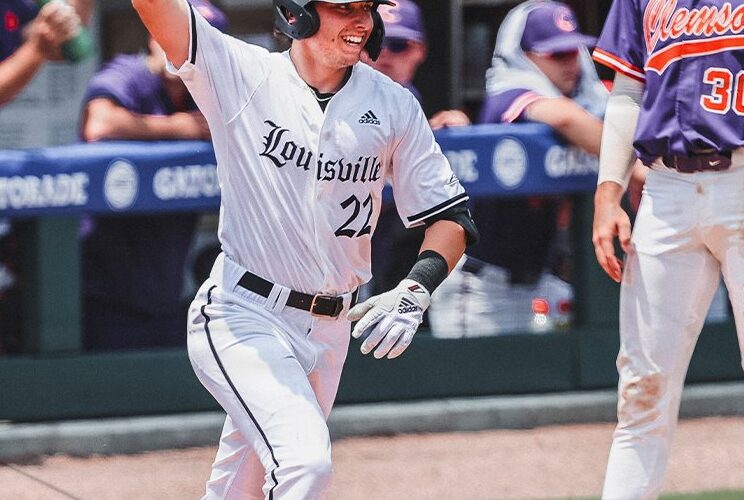 The Louisville Cardinals kicked off the ACC tournament against Clemson this afternoon and I think we can all agree that it was one of the most bonkers games we have ever watched. In the 15-10 victory over the Tigers, the two teams totaled 11 home runs, setting a new ACC record for the most home runs in an ACC Championship game.

The Cards scored 10 runs through the first five innings alone and showed no signs of slowing down. Through the sixth inning, every player in the batting order had recorded a hit. In the sixth inning Alex Binelas tallied his second homer of the day and Louisville had 15 hits for 14 runs. Henry Davis and Ben Metzinger also had two homers each for the day and Alex Binelas would add a third home run in the bottom of the eighth. Binelas and Metzinger totaled 10 RBI’s to contribute to Louisville’s 15 run total.

Corbett started on the mound for the Cards and finished his day with 2IP, 5 runs, 3 hits, 4 errors, and a 3.58 ERA. Evan Webster pitched the second and third inning and gave up 4 hits for 3 runs, 3 errors, and recorded a 5.50 ERA. Carter Lohman had 4 IP and proved to be effective for the Cards giving up 3 hits, 2 runs, and 2 errors with a 5.31 ERA. Michael Kirian was on the mound to finish things off for Louisville in the top of the ninth. He gave up 1 hit through 5 batters faced with a 4.93 ERA. The Louisville pitching staff had a total of 13 K’s for the day.