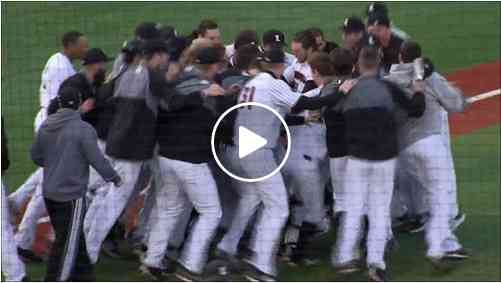 With one out, junior outfielder Logan Taylor at first base and the Cardinals (11-2) trailing by a run, Solak crushed a 1-1 offering from lefty Scott Tully sending it over the wall in left center for Louisville’s first walk-off win since April 28, 2015 when they walked off Kentucky 2-1. The homer also gave the Cardinals their first lead of the day after trailing 1-0 in the seventh, 2-1 in the 10th and 3-2 in the 11th. The game-winning homer followed a one-out single up the middle by Taylor.

The dramatic finish capped a 3-for-6 afternoon at the plate for Solak, who has hit safely in 11 straight games and reached base safely in 25 straight games dating back to last season. Senior first baseman Danny Rosenbaum was among five other Louisville players with two hits each finishing 2-for-5 with his second home run of the season while junior catcher Will Smith was 2-for-3 with two walks and one RBI.

Sophomore third baseman Blake Tiberi extended his career-best hitting streak to 13 games after a 2-for-5 outing at the plate. Junior outfielder Logan Taylor and sophomore shortstop Devin Hairston also chipped in with two hits each as the Cardinals finished with a 15-8 advantage against the Fighting Irish (6-6).

On the mound, junior righthander Zack Burdi struck out the only two batters he faced in the top of the 11th inning to keep the Louisville within a run while earning his first win of the season. Senior righty Kyle Funkhouser delivered another stellar effort allowing just one run on three hits with two strikeouts in a season-high eight innings. With Friday’s performance, Funkhouser became Louisville’s career leader in innings pitched with 311.0 surpassing the 309.1 by Mike Shields (1976-78). With his next strikeout, Funkhouser will match the Cardinals’ career strikeouts leader, Justin Marks (2007-09), who finished with 305 strikeouts at Louisville.

With the starting pitchers in command through the first six innings, Notre Dame connected for the first run of the day in the seventh inning when first baseman Zak Kutsulis sent a 0-1 pitch over the right field wall for his first home run of the season and a 1-0 lead. The Cardinals answered in the bottom of the inning on the seventh career home run for Rosenbaum, a line-drive shot over the left field wall to even the score at 1-1.

The game remained tied until the 10th inning when the Fighting Irish regained the lead at 2-1 on a two-out RBI single by Lane Richards. That lead was short-lived as Louisville evened the score at 2-2 in the bottom of the inning on a bases loaded walk to Will Smith from reliever Peter Solomon to score Solak. Notre Dame followed with a run in the top of the 11th to move back in front at 3-2 on a RBI double from Kutsulis, who hit for the cycle and was 4-for-5 in the game.

SO LONG SOLAK! No.4 Louisville wins its ACC opener with this walk-off home run to down Notre Dame in extras. #L1C4Game One Highlights: http://uofl.me/1RdgmMW

Posted by University of Louisville Baseball on Friday, March 11, 2016

Sophomore Brendan McKay had a career-best 13 strikeouts while the offense produced a six-run first inning as the No. 4 Louisville baseball team completed a doubleheader sweep of Notre Dame with an 8-2 victory in the nightcap Friday evening at Jim Patterson Stadium.

The Cardinals (12-2, 2-0) extended their season-high winning streak to seven games while clinching their 11th straight Atlantic Coast Conference series victory. Louisville also pushed its winning streak against Notre Dame (6-7, 0-2) to eight games and improved to 11-0 at home this season.

McKay’s 13 strikeouts were one better than his previous career-high total and the most for a Louisville pitcher since Scott Barber had 13 against Butler on Feb. 28, 2003. In Friday’s win, McKay moved to 4-0 on the season and 13-3 in his collegiate career allowing only two unearned runs on three hits while surrendering five walks in 6.2 innings. In his four starts in 2016, McKay has allowed just one earned run for a 0.33 ERA and has 37 strikeouts in 27.2 innings pitched.

Louisville wasted little time taking command of Friday’s nightcap with its decisive six-run first inning. After Ray led off with a single up the middle and Solak was hit by a pitch from Notre Dame starter Brandon Bielak, McKay drove them both home with his two-run double off the centerfield wall. After loading the bases later in the inning, sophomore shortstop Devin Hairston walked to score McKay before Lyman followed with a run-scoring single to left to plate senior first baseman Danny Rosenbaum. The final two runs of the inning scored on a throwing error by Fighting Irish third baseman Kyle Fiala.

Notre Dame broke through for its only two runs of the game in the fourth inning as catcher Ryan Lidge followed a two-out error by the Cardinals with a two-run double down the left field line. However, they would get no closer as McKay and junior righty Jake Sparger limited the visitors to just two hits over the final five innings of the game.

Louisville added to its advantage in the sixth inning on a RBI single from Lyman to score Fitch. Solak scored the final run of the night in the seventh inning when he reached base on a Notre Dame error, stole second, moved to third on another Irish error and heading home on a wild pitch.

Sparger followed McKay and finished with three strikeouts and allowed just one hit in 2.1 innings of shutout relief to close the game. Bielak took the loss for Notre Dame and dropped to 0-1 on the season allowing six runs, including four earned, on four hits with two strikeouts and four walks in three innings.

The Cardinals and Fighting Irish will conclude their series on Saturday at 1 p.m. ET. Admission is free and the game will be televised by ESPN3.