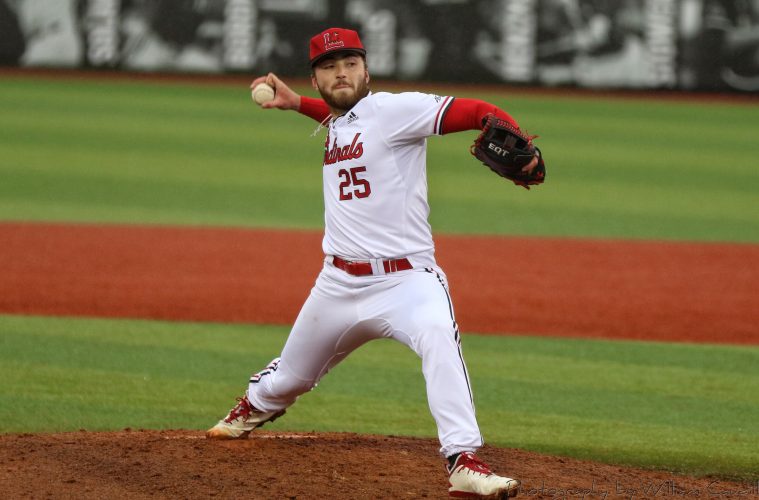 Despite having to battle subpar weather conditions for a majority of the week, the #7 Louisville Cardinals (31-9, 15-6) still had themselves a pretty successful week thanks mostly in part to their offensive surge they’ve experienced in the second half of the season. They began the week by throttling the Kentucky Wildcats (20-20) on their own diamond, then came home for the weekend series where they won two games to one against the #22 Miami Hurricanes (27-14, 11-10).

With only a month left in the regular season, Louisville’s offensive woes seem like only a distant memory. The team as a whole is now batting .285 after floating around the .260-.270 mark for a majority of the season and dipping as low as .254 just two weeks ago. The Cards have registered double digit hits in 8 of their last 9 games, driving in 36% of their season RBI total in that same 9 game span. Louisville now features 7 batters who are batting over .300 on the season, including preseason All-American Logan Wyatt. With a relatively easy week on the horizon for the Cards, there’s no telling how much higher the team as a whole can go from an offensive standpoint.

While the increase in competition has subjected the pitching staff to couple rough outings in recent weeks, as a whole they are still one of the bets units in all of the ACC. In the game against Kentucky, the bullpen ate a ton of innings yet only surrendered a single run on the road. Reid Detmers & Nick Bennett and the relievers after them combined for double digits strikeouts in both of their starts. Game 2 in the Miami series where the bullpen was absolutely shellacked can be mostly attributed to the sloppy conditions that occurred throughout the course of the game. While it’s difficult to imagine that this pitching staff could use a week to regain a little bit of confidence, a tuneup week of sorts will be just what the doctor ordered.

Coming up this week, Louisville will hit the road for the midweek game and take on the Cincinnati Bearcats (18-21), then come home for a weekend series against the Alabama A&M Bulldogs (13-29).

Louisville will start on the road for the midweek game, then return home for a normal slate of Friday/Saturday/Sunday games.

Adjusting the ticketed entry plan first featured last season, 17 of this season’s 34 home games will revert back to free entry. This week, all three games against Alabama A&M will feature free admission. Tickets for later games can be purchased here. In case you cannot make it to any of the games, all 3 games against Alabama A&M will be televised on ACC Network Extra and broadcast on 93.9 The Ville. The road contest against Cincinnati will be broadcast on 93.9 The Ville but not televised.

Only their second road game all season against a sub-100 RPI opponent, the Cincinnati Bearcats don’t pose all that much of a threat compared to the road trips against Clemson and NC State. As a team, the RPI 124th Bearcats are batting a lowly .245, with only two hitters on the team batting above .260. Infielder Joey Bellini is Cincy’s best offensive weapon, as the junior leads the Bearcats in batting average (.349), on base percentage (.427) and OPS (.832). While infielder Jace Mercer and outfielders Jeremy Johnson & Joey Wiemer are combined to bat only .242, they surprisingly could play a key role in a potential upset of the Cardinals. The trio are combined for 73 walks and 45 stolen bases on 55 attempts. Each player is ranked in the top 5 in stolen bases in the AAC, with Mercer’s team leading 28 walks ranking 7th in the conference. Cincinnati can sometimes be a trap game for the Cards, with the 2017 CWS team having their 19 game winning streak snapped at the hands of the Bearcats in Cincinnati. Louisville’s pitchers will have to limit their walks and simple base hits, as they could easily turn into stolen bases to put the Bearcats in scoring position.

Fortunately for the Cards, their red-hot offensive surge should have a good chance at continuing against the Bearcats’ pitching staff. They sport a team ERA of 5.27 and team WHIP of 1.61, with only 3 of their 17 pitchers carrying an ERA of less than 3. Midweek starter senior right-hander David Orndorff boasts a less than impressive ERA of 4.50, though he has only surrendered 2 earned runs over his last 2 starts, both of which went 6.0 innings or over. Those two starts also produced his two highest strikeout totals of the season, so Orndorff will be riding a momentum high heading into his matchup with Louisville. Though once he is potentially chased out of the game, the Cardinal Nine could have a chance to feast on the Cincinnati relievers. Out of the 11 UC pitchers with only 1 start or less, they have combined for an ERA of 5.75. Like it has for a majority of the season, the key for the offense will to be aggressive early, and I see no issue with the Cards doing so after the tear they have been on recently.

Normally when breaking down an opponent, I try and find as much good in them as I can. Seniors Jonathan Smith II & Justin Lott are both somewhat capable hitters and junior pitcher Michael Hovermill has a respectable number of strikeouts. But that is pretty where I run out of good things to say about this baseball team. According to RPI, they are the second worst team in all of Division I. In their 3 games against RPI top 25 opponents (2 vs. Auburn, 1 vs. Mizzou), they lost all 3 by a combined run total of 33-8. They even lost a pair of games to RPI 110 Morehead State (who Louisville defeated 10-9 earlier this season) and even an exhibition game against Selma. They have an even .250 team batting average and a dreadful team ERA of 7.54, most of which comes against SWAC competition, a conference which ranks dead last in RPI at 31st. Anything short of a series sweep by the Cardinals by a large margin will be a disappointment.

I predict that after Louisville squeezes out a win against the Bearcats on the road, they will come home and decimate Alabama A&M to go 4-0 on the week.