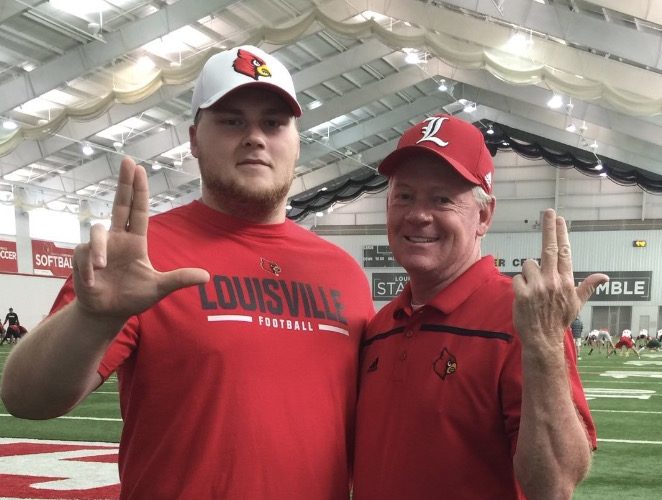 When Cole Bentley committed to Louisville it was big news for ‘Cards fans. Typically, the big maulers “out in the state” wind up at Kentucky.  Bentley is from Eastern Kentucky but he chose the ‘Cards however, because he believes the program is on the verge of something special and sees an opportunity to contribute early.

Around the time he announced his decision to attend Louisville, some people coaimed Kentucky wasn’t pursuing Bentley very hard and that he “settled for Louisville.”  Bentley was quick to dispel that rumor when I asked  him about it.

“They (UK) did pursue me very hard.  It was nothing to come home and have 10-15 hand written letters from UK during the summer and late in my junior school year,” offered Bentley.  “They invited me to every home game and we talked on the phone often. Later in the summer they realized their scholarship numbers were going to be less than usually for 2017 and they already had too many interior lineman. They are only taking around 16 commits this year and that’s why coach Stoops couldn’t offer me a scholarship.”

Bentley also shot down the assumption he grew up a fan of the Wildcats.

“I actually grew up a Marshall fan. But haven’t really been a fan of any team since about middle school.”

Bentley started playing football as a Marshall fan back in third grade as a linebacker in Pee Wee ball.  He now plays TE in a run dominant Wing T system for Belfry High as well as defensive tackle on the other side of the ball.

While Bentley plays tight end, he is used primarily as an extra edge blocker in Belfrey’s attack but he projects as an interior lineman in college. The thing that stands when watching his tape is how he drives his defender all over the field or to the ground until the whistle blows.

“I’ve always just had that mentality that I’m going to finish a play no matter what. My dad has always told me that colleges will notice those types of players that always finish plays. The way I feel about football is no one can get beat up or abused for 4 quarters and keep wanting to play. Get into your man keep abusing him and when the second half comes he will be ready to quit and the game is yours.”

He’s up to 315-pounds and his athleticism combined with his unrelenting motor should have Louisville fans and running backs excited for the future.

Bentley will conclude his high school football career this Saturday when the Pirates take on the Central Yellowjackets in the 3A Kentucky state chanpioship.  If Belfry wins it will be their fourth straight 3A state title and Bentley will not know what it’s like to not win state as a player.  Also, his days in high school will end shortly thereafter the season wraps up. The talented offensive line prospect will enroll early at UofL on January 6th as an early enrollee.