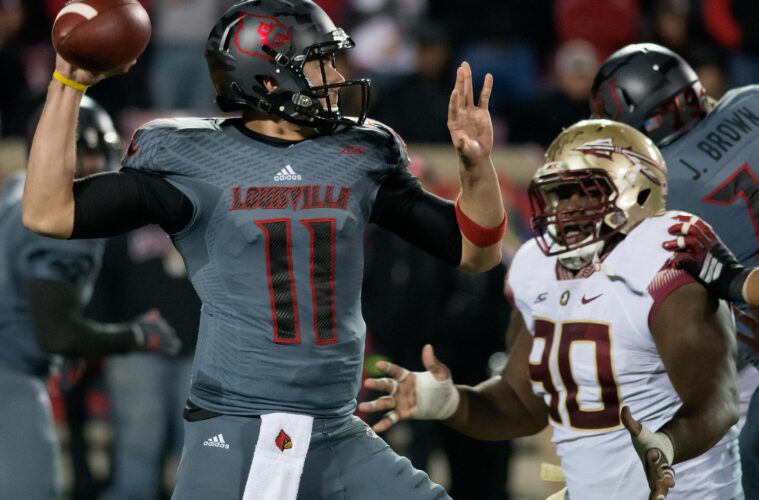 VIDEO: ONE HOUR WITH BOBBY PETRINO AT ACC KICKOFF

Needed Every QB On The Roster

Bobby Petrino 2.0 at UofL’s 1st year saw a Quarterback position in flux.  Will Gardner suffered a knee injury during the 3rd Quarter of the Florida International game with a 31-3 lead on a roughing the passer penalty.  As a result, little used senior Brett Nelson came in for relief and then later Kyle Bolin finished things up in the 4th quarter.  That late hit vs. FIU set into motion the need for the Cards to play 4 QBs in 2014.

The next week vs. Wake Forest true freshman Reggie Bonnafon started one week following the funeral for his father…..and Won. A week later Bonnafon rolled through Syracuse.  Bonnafon & Gardner split duties vs. Clemson, and then Will Gardner was back to being the starter for 2.5 games until Will’s FIU injury finally gave out for good in a non-contact tear in Boston vs. Boston College that ended his season.  Reggie finished up BC, won on the ROAD at Notre Dame, and left with an injury vs. Kentucky.

UofL had to go the distance in comeback fashion with 3rd string redshirt freshman Kyle Bolin to win vs. Kentucky and had to go into their bowl vs. #13 Georgia with Kyle and virtually no back-up after Bonnafon didn’t look like himself.

Prior to Will Gardner’s injury his play was good enough to win despite a series of fumbles, something that Coach Petrino lamented that he should have worked more with prior to the season.  Gardner coughed up the ball A LOT, twice vs. Miami inside the Louisville 10 yard line, vs. Virginia at the UofL 17, and twice vs. FIU.  That is WAY too many to start the season.  Especially considering that the Cards actually lost ALL of those fumbles.  In fact, Louisville was 123rd of 127th in FUMBLES LOST (with 16 fumbles lost) in 2014 many of which came from the Quarterback position.

Still Gardner’s play was good enough to win even as he looked out of sorts vs. Virginia in his first road start.  Later Gardner came off his FIU injury off the bench to nearly rally the Cards on the road AT DEATH VALLEY vs. Clemson.  Will’s season ended with him completing 57.5% of his passes for 122-221 for 1669 yards and 12 TDs and just 3 INTs. Gardner also rushed 27 times for -106 yards.

Reggie Bonnafon didn’t have a benefit of Spring Practice and arrived at UofL after his Spring Graduation from Trinity.  Reggie threw his 1st TD in the second game of the season vs. Murray State and then really didn’t show much against a really tough Virginia Defense.  But he kept playing and while it wasn’t pretty vs. Wake Forest he got the win and a week later went into the Carrier Dome and was outstanding vs. Syracuse.  He did enough to win and showed progress.  Clemson’s Defense was one of the toughest in the country last season and Reggie went in and held his own…but he looked like a freshman and got frustrated.  All of experienced gained really helped when the Cards called on him again vs. Boston College and Notre Dame.  The progress made was HUGE from September to November.  Reggie finished with a 50.8% completion percentage throwing for 61-120 for 864 yards and 5 Touchdowns and added 164 yards on 72 carries and 5 touchdowns.

Kyle Bolin came in SLINGING against Kentucky and brought the Cards back from down 13 and lead UofL to a 44-40 win in the Governor’s Cup.  Bolin’s arrival was surprising given his showing at the start of Fall Camp in August when Petrino had to move Kyle down to the newcomer’s group so that the veterans could effectively practice.  Kyle torched the Wildcats and did OK vs. Georgia.  Bolin really was a 1-read type of guy and could really use some development in running the offense so that he can avoid his high interception ratio.

Coming into Fall Camp the job for starting Quarterback has to be Reggie Bonnafon.  Bonnafon finally had the chance to go through Spring Practice and appeared to take a HUGE step forward.  Reggie’s biggest hangup in 2015 was that he took a BUNCH of sacks while hanging on to the football for too long. Installing the offense for the 5th & 6th time during 2015 Fall Camp is going to allow Reggie to take an immense leap forward for this coming season.

Will Gardner gave Louisville the best chance to win in 2014, coming off an injury and with the development of Reggie Bonnafon I think that there is an argument there that Will could still be this team’s best QB…but is he ready to come back?  And there is a big question of Bobby Petrino’s preferred style moving forward:  Reggie Bonnafon, Lamar Jackson, Tylin Oden, Jawon Pass.  Gardner doesn’t fit that mold AND the other big question is “Can Petrino invest #1 QB time and reps into a player who has had multiple knee surgeries?”

It’s a reasonable question, but ultimately it makes sense to peg Reggie Bonnafon as the #1 QB for Louisville in 2015.  But who comes off the bench as the #2 QB might just depends on game situation.  Louisville up 7?  It’s probably Will Gardner.  Louisville down 14?  It might be Kyle Bolin.  Cards up 28 or more?  Probably Lamar Jackson.

Lamar Jackson is also interesting in this QB race in that he fits the style Petrino is gearing towards for the future and the fact that people inside the program are RAVING about his ability. I doubt a true freshman comes in a steals the starting job with the experience Louisville has on its roster at the QB position, but I would look out for Lamar to see the field in 2015 and if he’s special, who knows?

Tyler Ferguson has a strong arm, but Petrino talked about at ACC Kickoff about him controlling his emotions.  What Bobby Petrino wants in a Quarterback is a calm, calculating signal-caller.  Ferguson may have the arm-strength, but CBP has enough arms and won’t tolerate the ups & downs emotionally on the field at the leadership position.  I thought Kyle Bolin was completely out of the QB race last November and then he came in and stole the show. I wouldn’t write anyone off in this group…at all.

Bottomline, Louisville has only had one season since 2003 where its starting Quarterback didn’t miss time due to injury.  Last year, Louisville actually used 4 different QBs due to bereavement & injury.  The good news is that Cardinal Football now has a lot of players with big game experience.  Will Gardner vs. Miami, FSU, and Clemson. Bonnafon vs. Clemson and Notre Dame.  And Kyle Bolin vs. Kentucky and Georgia. If Petrino finds his Quarterback position in a bind in 2015 he has all kinds of qualified options.

KNOW THE RULES, PLAY THE GAME, OWN YOUR DESTINY