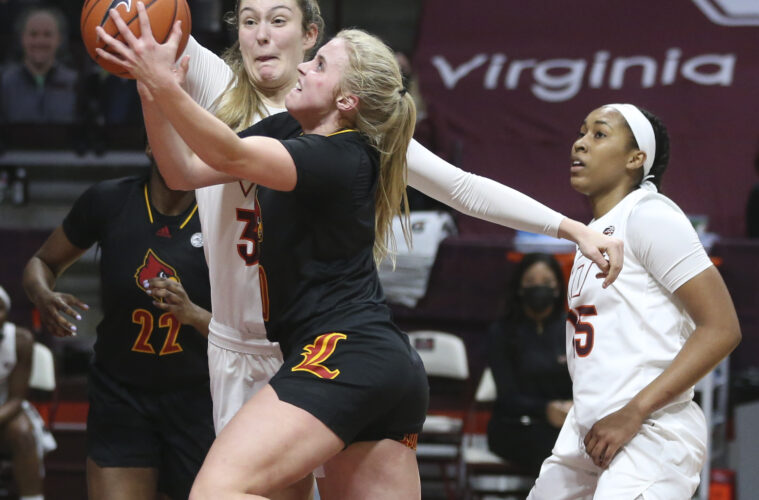 #2 Cardinals Win The Battle In Blacksburg

Schedule changes are the norm for 2020 and tonight’s game was another game that we didn’t know was happening until what felt like the last minute. It was announced on Tuesday that Louisville would travel to Blacksburg to face Virginia Tech and they knew they’d have to prepare for a battle.

The Cards came out strong against The Hokies, showing consistent defense and aggressive offense. Elizabeth Balogun dominated with 5 defensive rebounds in the first quarter. As a team Louisville was 11-20 during the first quarter and they were led in scoring by Dana Evans and Olivia Cochran, who had 6 points each. Louisville went on a 7-0 run during the second quarter and would have their biggest lead of the half, at 16 points. I’m almost certain that Virginia Tech made zero plans to guard Norika Konno, who shot 67% in the first half for 6 points. Leading by 9 points at the half, Louisville was shooting 50% and had also tallied 15 defensive rebounds.

Louisville struggled a bit in the third quarter allowing Virginia Tech to cut the deficit to just 1 point at one time after going on a 14-2 run. Elizabeth Dixon picked up two quick fouls and Dana Evans was at the point of needing to pull her team back into the mindset they had during the first half. The Cards, quite frankly, got choppy on both ends of the court and totaled 10 turnovers in the third quarter alone. Now I won’t get on my soapbox about the officiating and the number of whistles, but you can imagine that I sounded a lot like Mark Blankenbaker sprinkled with the attitude of a toddler that hasn’t napped all day.

Leading by just one point going into the fourth quarter, Louisville found themselves in a battle that was unlike any other they had faced so far this season. They were outscored 20-12 in the third quarter, so Jeff Walz and company needed a whole fire lit in the offense. They got it when Kianna Smith hit a three early in the quarter, followed by a quick layup from Dana Evans. We also saw an improvement in transitions during the period, but Virginia Tech would go on an 8-0 run to take a two-point lead with less than 3 minutes to play. The fire in the offense went out when Louisville missed 3 straight three-pointers with open looks. Dana Evans tied the game at 67 with about one-minute left to play, which put us all on the edge of our seats. With just 23 second left in regulation, Dana Evans took back the lead for the Cards with 2 in the paint. An incredible steal from Dana allowed her to run the clock down to 5.1 seconds before being fouled. Hailey Van Lith sealed the deal for the Cards after making 2 free throws and extending the lead to 4, for a final score of 71-67.

Coach Walz stated that they got a little sloppy and had some foul trouble toward the end of the first half. He said that everyone needs to be dialed in and ready to play, while also giving credit to how well Virginia Tech played. This was also the second game in a row where Coach Walz noted how much the team still needs to work on their three-point shooting.

Dana Evans, who led the team in scoring with 22 points, said that Virginia Tech got the best of them in the third quarter, but she felt that they responded well. She also said that this is ACC play, everyone is going to give this team their best shot. Talking about her steal at the end of the game, she admits to trying to run the clock out but not realizing there was so much time left.