Elvis has left the buidling! 4 now…. 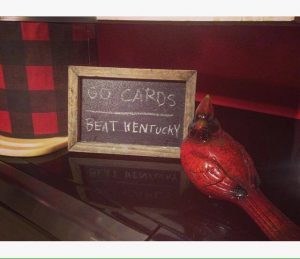 I certainly did not have a blue blue blue Christmas this year… thank the basketball gods for that.  The Cats take the Louisville favored football match-up and Louisville takes the Kentucky favored battle on the court. Regardless of how horrible the two week span of losses to Houston and Kentucky football were, the Heisman trophy and the Battle of the Bluegrass basketball victory were worth the inherent pain.

We didn’t know what this team could be heading into the season.. and the glass ceiling has obviously not been met just yet.  But, man, that was fun.  I liked the Wednesday night hype.. Most of us had to work early that day so we could get our last minute pokes before tip off with co-workers/classmates.  Vibes were good, anticipation was up there and emotions were on the line.  If this is what it takes for the cards to get a victory and the Yum! Center to rock the way it did, make it a weeknight game from here on out.  For fans, we live it and breathe the conversation daily… But as ESPN’s Melissa Isaacson wrote how for players.. it might be a bit of a culture shock. Read here…. http://www.espn.com/mens-college-basketball/story/_/id/18319057.

Most top tier programs feature players who come from outside in, that is unless your name is Quentin Snider, for Louisville.  Ray Spalding, too, for 13 min and 4-4 on FT attempts. Snider was on the floor for 37 min., went 10-19 from the field and two behind the arc, 6 rebounds, 5 assists and not a single free throw shot was had. 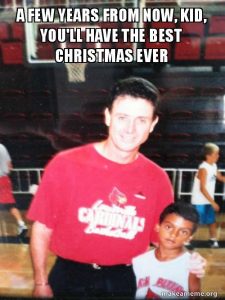 Lets try to forget but also appreciate in its own right that Quentin Snider first committed to Louisville, reopened his recruitment and committed to Illinios before finally decided to stay home and play in Cardinal Red.  As a sophomore pretty much taking over the starting role and the go-to guard position, Q went scoreless only twice.. vs Kentucky and Virginia.  And one week ago today, Snider brought down the house in Louisville.  Tonight… the encore. 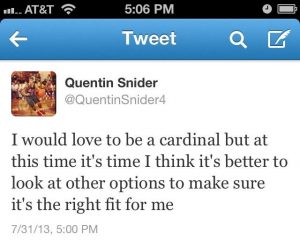