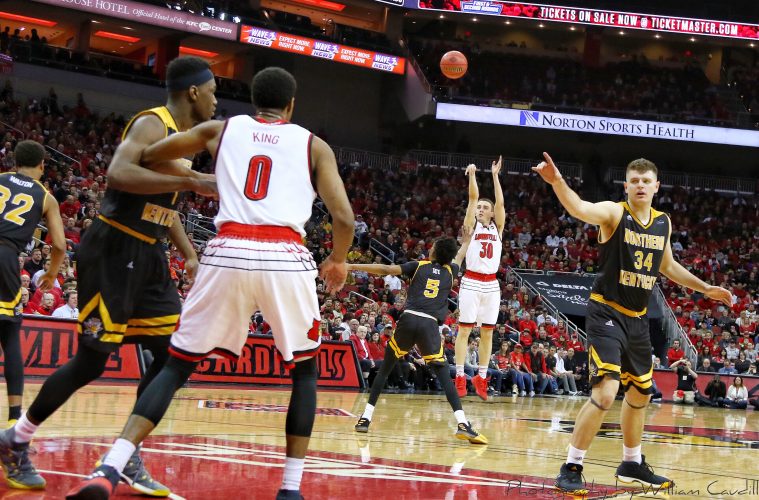 The University of Louisville will square off against the Middle Tennessee Blue Raiders Sunday inside the KFC Yum! Center.  MTSU narrowly missed the NCAA Tournament lost a surprising game to Southern Miss in the Conference USA Tournament after winning CUSA’s regular season.  The Blue Raiders advanced to the NIT’s 2nd round with a 91-64 cruise over Vermont.

After beating Vermont it was announced that MTSU head coach Kermit Davis had accepted a new head coaching job at Ole Miss, but will continue to coach the Blue Raiders before Davis moves to Oxford.  Middle Tennessee has had a nice run lately, and in 2017-18 they own some serious wins:  Murray State, Vanderbilt & Ole Miss.  They also have some really close losses: 6 points to Auburn, 5 points to USC, 3 points to Miami.  In conference the Blue Raiders did fall to Marshall in both contests and they did lose an early season head scratcher to Belmont by 6.

MTSU can SHOOT.  The Cards can not afford to leave Nick King, Giddy Potts or Antwain Johnson open for jumpers.  King is a match-up problem at 6-7, 225 and also leads the Blue Raiders with 8.5 rebounds per game.  6-10, 250 lbs Brandon Walters also packs a punch down low and shoots an incredibly high % inside.

Middle Tennessee is fundmentally sound.  They score, are deadly from 3, hit their FTs, find their teammates, they are incredibly efficient rebounders, and rigorously defend the 3-point line.  The Blue Raiders don’t get to the foul line often, and they foul A LOT.  UofL should have some offensive success in the paint but ultimately MTSU will be tough to beat and move on to the NIT Quarterfinals.