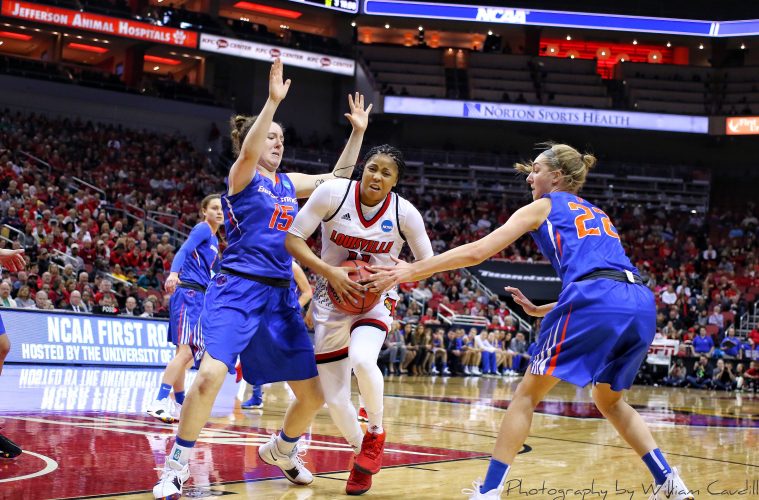 Top-seeded Louisville didn’t take long to allay concerns about rustiness or looking past No. 16 Boise State.
Reserve forward Kylee Shook immediately looked sharp shooting the ball, sparking the Cardinals to a thorough opening-game victory that included plenty of contributions.
Shook had 14 points and 10 rebounds off the bench to lead Louisville to a 74-42 blowout of Boise State on Friday in the first round of the women’s NCAA Tournament.

Beginning NCAA play as a top seed for the first time in school history, the Cardinals (33-2) used quick spurts early in both halves, along with defense, to cruise to victory. Louisville started slow from the field and led Boise State just 9-8 after nearly six minutes, a slim edge that quickly widened after Shook entered midway through the first quarter.

The 6-foot-4 sophomore alternated 3-pointers with Jazmine Jones’ layups for a 19-8 lead before adding her own layup to make it 21-11.

”I just try to go to the open area, make basketball plays,” said Shook, who finished 5 of 8 shooting and made both 3-point attempts for Louisville. ”It was just open today so that’s where I popped.”

Louisville then combined size and quickness to break it open coming out of the break, outscoring No. 16 seed Boise State (23-10) 16-4 for a 50-26 cushion. The Cardinals dominated most every category, from points in the paint points to rebounds (51-30) to fast-break and bench points.

Most importantly, Louisville held Boise State to a season-low 24 percent from the field (14 of 59).

Sam Fuehring had 14 points and 11 rebounds, Jones and Bionca Dunham each scored 10 and Myisha Hines-Allen had 14 rebounds for the Cardinals, who shot 30 of 62 (48 percent).

”The bench did a great job,” Hines-Allen said. ”Kylee and Bionca came in and gave us a spark. Once we played our game we were able to pull away.”
Shalen Shaw led the Broncos with 12 points, while Marta Hermida and Riley Lupfer each added nine.

”I think we kind of weren’t focused on what we needed to do,” Shaw said. ”I think we let it slip away.”

Boise State: Playing a midday game in a time zone two hours ahead might have been a factor, but the Broncos couldn’t keep up with Louisville after six minutes. Shooting 7 of 31 in the first half certainly didn’t help on the road, and it became a wrap when Boise State allowed the Cardinals to start the third quarter fast and pull away.

Louisville: The Cardinals needed a few minutes to shake off nearly two weeks of rust, but they stayed in gear once Shook got them going. Louisville welcomed a rout after winning three Atlantic Coast Conference games by 10 total points.

Louisville outscored Boise State 52-14 in the paint and 33-6 in bench points. The Cardinals also scored 18 points off 16 turnovers. Boise State was just 4 of 30 from long range.

Louisville scoring leader and ACC Player of the Year Asia Durr made the game’s first basket but her shooting struggles continued as she made just 4 of 14 from the field for nine points. The junior guard contributed 3 rebounds, 3 assists and 2 steals in 26 minutes to help the Cardinals’ rout.

”Shooters have to shoot. That’s what she does,” he said of Durr. ”She’s the first one in the gym and the last one out of the gym. What I’m telling her is to just take a break. Sometimes you can get out there and you mess with your mind so much. … Just keep practicing.”

Louisville faces the Marquette in Sunday’s second round.