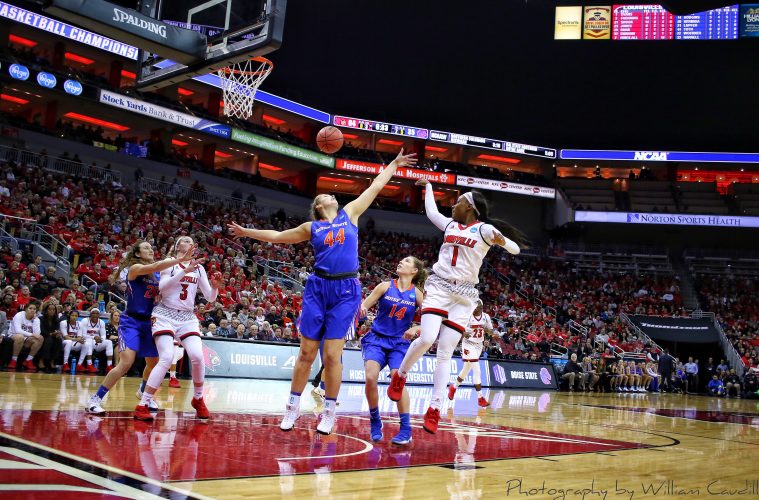 The Cardinals are seeking their eighth trip to the Sweet 16 in program history, all of which have come with head coach Jeff Walz at the helm, and their sixth since 2010.

Louisville advanced to the Lexington regional quarterfinal with a 74-42 win over No. 16 Boise State on Friday afternoon. Sam Fuehring and Kylee Shook led the way in the win as both players finished with double-doubles. The Cardinals limited the Broncos to 24 percent shooting overall and just 4-of-30 from beyond the arc.

Fuehring’s double-double marked her second in her last five games and her third this season. In her last five games, she has scored in double-figures five times and is averaging a team-high 14.8 points, while shooting 68.3 percent (28-41) from the floor and adding 7.6 rebounds per game.

With 33 wins, Louisville is tied for the second-most wins in program history and just one win away from tying a program-best 34 wins in 2008-09. That season the Cardinals advanced to the national title game.

ABOUT THE GOLDEN EAGLES

No. 8 seed Marquette (24-9, 14-4) advanced to the Lexington regional quarterfinal with an 84-65 win over No. 9 Dayton on Friday. Natisha Hiedeman led the way for the Golden Eagles with 32 points on 10-of-18 shooting, including 8-of-12 of 3-point range. She also added five assists, five steals, four rebounds, while committing just two turnovers.

Erika Davenport added a double-double with 16 points and 13 rebounds.

Marquette fell in the Big East title game to DePaul, 98-63, but before that loss had won eight straight games. In non-conference play, they fell to Tennessee in overtime, 101-99, and at Notre Dame in overtime, 91-85.

Allazia Blockton leads MU in scoring with 18.6 points per game, while shooting 51.4 percent from the floor. She ranks second on the team with 6.2 rebounds and is shooting 86.6 percent from the stripe (103-119).

Hiedeman is averaging 13.5 points, while shooting 33.7 percent from beyond the arc and knocking down a team-high 64 shots from deep. Amani Wilborn (12.5), Davenport (11.8) and Danielle King (11.5) all average double figures for Marquette, while Davenport is pulling down a team-high 8.4 rebounds, and Wilborn (4.0) and King (3.6) rank first and second in assists.

The Golden Eagles rank 17th in the country with 80.3 points per game and 25th with a 45.5 shooting percentage.

UofL is 15-9 all-time against Marquette and the two teams have never faced in the NCAA Tournament. They last squared off on Jan. 22, 2013 in UofL’s final year in the Big East as the Cards won, 64-63.