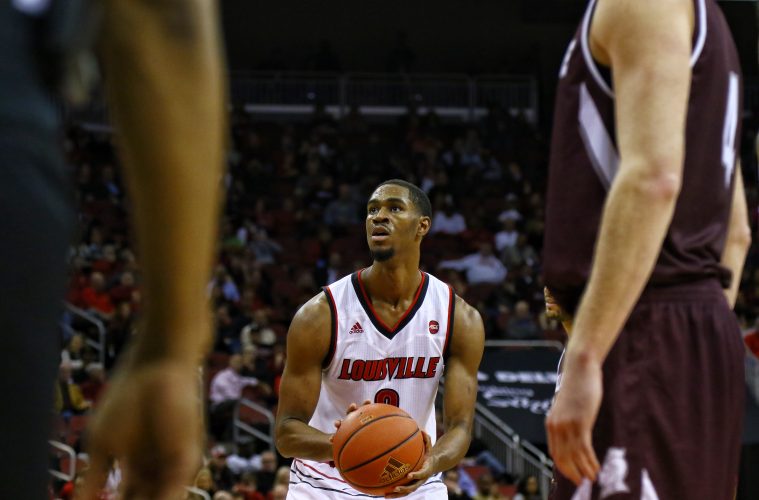 Winning with the Mind: Integrating Mindfulness into UofL Basketball

Imagine, if you will, a dimly lit basketball arena. At the center of the court, a group of athletes sit cross-legged with their eyes closed, focusing only on the beat of their hearts and the sound of their breath. The arena, usually electric with the roars of thousands of screaming fans and pulsing with intensity, is now only permeated by fleeting creaks and ambient sounds of empty space. For most people, this may seem like an odd scene, especially since athletic training is typically focused on high intensity practices with repeating drills, mastering plays, building strength, and increasing endurance. Nevertheless, the integration of mindfulness practices into athletic training has taken hold and produced some significant benefits.

Incorporating mindfulness in athletic training can be heavily attributed to two people: George Mumford and Phil Jackson. While many critics have mocked their antics, it’s difficult to judge them with 11 NBA championships under Jackson’s belt, the most in NBA history. NBA superstars Michael Jordan, Kobe Bryant, and Shaquille O’Neal attribute much of their success on and off the court to the teachings of Mumford and Jackson, which should also tell you something.

So, what is mindfulness, and what is its appropriate role in sports? More importantly, how can it help UofL at this time and place?

Mindfulness, pioneered by Dr. John Kabat-Zinn, is essentially described as the practice of living in the moment and having a direct experience with one’s mind without attachment or judgement. In short: Be Here Now.

With respect to sports, mindfulness training is designed to reduce the stress of athletic competition and increase performance. There is an extensive pool of research identifying mindfulness as a solid predictor of athletic success and preventer of performance deterioration. The most important effect that mindfulness has on the athlete is the improvement of their mental game, which is arguably just important as the physical game. Players exert endless energy training their physical muscles, but they must also learn to train the muscle of the mind. Through mindfulness, players learn to play in the moment and let go of the mental and emotional pressure that prevents them from performing at their potential. They accept that they’re going to make mistakes and therefore won’t become preoccupied with the shot they missed, the foul they made, or the play they didn’t see develop. They let go of the anxiety about what’s going to happen 10 minutes or 20 seconds from now because the game demands them to be 100% here and now. Focused. Prepared. Mindfulness also influences actual physical performance in terms of improved shooting selection and accuracy, passing, team flow, rebounds, and enhanced endurance and efficiency.

For UofL specifically, I think it’s pretty apparent that while our team is incredibly talented and athletic, we tend to fall short on our mental game. Coming off of the incredibly frustrating game with Kentucky, this was very obvious to me; our performance in that game not reflect our talent. With many of our players, if they make a mistake within the first few minutes, it very observably affects their performance for the rest of the game – they become impatient, frustrated, and start hunting shots instead of playing as a team in addition to many other shortcomings. Lucky for us, we often find ways to rally in the second half and pull away with a victory, but it’s hard fought and messy (the Cardiac Cards moniker remains well-earned) Additionally, the incessant UofL drama they are forced to deal with on a daily basis has to be wearing on them. I can’t imagine what it’s like to be in their shoes having to take unrelenting low-balled criticism and crass remarks because some arrogant suits decided to make some ridiculously terrible decisions.

In summation, by integrating mindfulness into athletic training, we can help our athletes

I have been teaching mindfulness and meditation since I was in college, and I believe this would make a noticeable impact on the way players approach not only real, in-game situations but also game prep and off-court, outside stressors. I doubt this article will ever cross Coach Padgett’s desk, but for anyone wanting to learn more, here are some good sources:

– The Mindful Athlete – By George Mumford