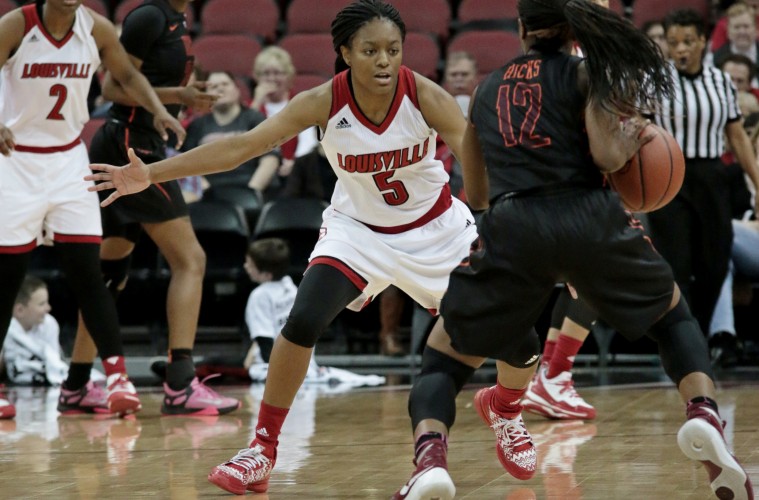 The No. 23 University of Louisville women’s basketball team begins its three-game road trip on Thursday, when it plays at Virginia at 7 p.m. in Charlottesville.

Live video of the Jan. 14 contest will air on Virginia’s athletics website. The radio broadcast will be available on WKRD 790 AM in Louisville, with Matt Andrews (play-by-play) and Adrienne Johnson (analyst) calling the action.

The Cardinals (12-5, 4-0 ACC) earned their third victory over an Associated Press top-25 team on Sunday, when they upset No. 18 Duke 65-48. Louisville held Duke to 39.1 percent shooting, outrebounded the Blue Devils 42-36, and turned 22 turnovers into 27 points for its ninth-consecutive victory.

Hines-Allen continues to lead the Cardinals in scoring (15.4) and rebounding (7.7), while Moore boasts a team-leading 81 assists and is second in points (13.9). Briahanna Jackson rounds out the top three scorers at 13.8 points and a team-high 44 steals.

Walton, who is averaging 7.4 rebounds, leads the ACC and is ninth nationally with 4.5 offensive boards per game. The redshirt junior collected eight in the victory over Duke, marking her seventh game with at least five on the offensive end.

The Cavaliers (12-5, 2-1) have won four of their last five games after earning a 52-50 decision at Wake Forest on Sunday. Virginia shot just 29.8 percent from the field, but forced Wake Forest into 31 turnovers – for 22 points – and made 19-of-24 free throws. The Demon Deacons made 18 trips to the line, but converted just eight attempts.

Mikayla Venson had 20 points on 5-of-15 shooting in the win, collecting a game-high four steals. Lauren Moses added 10 points and six boards, and Mone Jones came off the bench to contribute six rebounds.

It was the Cavaliers’ first game without Faith Randolph (broken thumb), who has a team-best 50 assists and is second on squad with 13.3 points per game.

Louisville and Virginia have met just three times heading into Thursday, with the Cavaliers owning a 2-1 lead. The two programs met twice last season, splitting the decisions. Louisville earned a 67-55 decision at home on Jan. 18 before falling 75-59 on the road on March 1.

In the Louisville victory, Sara Hammond scored 20 points, Myisha Hines-Allen had 17, and Mariya Moore added 10 for the Cardinals, who scored 52 points in the paint and tied a school record with only five turnovers.

In the regular-season finale that Virginia won, Louisville shot just 33.3 percent from the field and lost the rebounding battle 39-28. The Cavaliers benefitted from 33 trips to the charity stripe, hitting 27 free throws, and also connected on 51.2 percent of their shots.