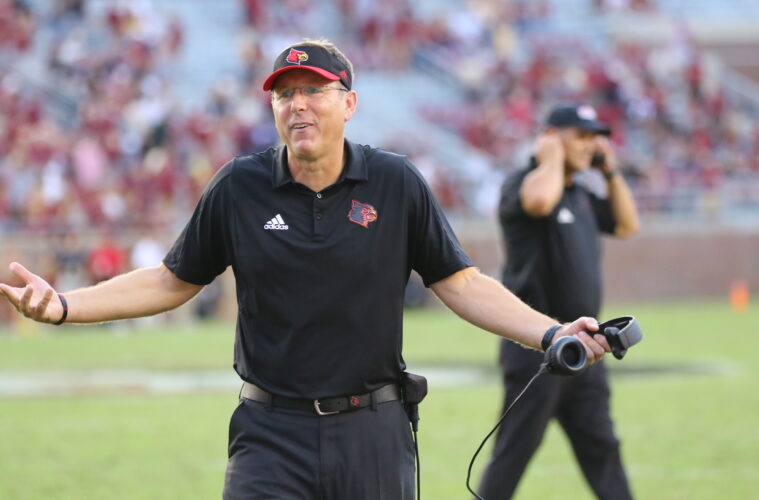 The 2022 season could not have started more disappointing:

Louisville’s played 3 pretty good teams and two pretty bad ones. Boston College on Saturday was beat up, ravaged with injuries and did everything under the sun to give Louisville the win. Go back and watch the truly head scratching turnovers and penalties that BC committed…….. and yet Boston College was able to win the game.

THIRTEEN PLAYS of 15+ Yards on Saturday. 13!!!! Boston College was averaging 4.32 yards per play going into Saturday’s game. They averaged 7.9 yards per play against Louisville.

BC rushed for 144 yards against Louisville. The Eagles had combined for 128 yards on the ground in their first three games versus Power Five opponents this season.

Louisville is 125th (of 131) in Allowing Plays of 20+ Yards or More. Only Hawaii, North Texas, South Florida, Colorado, Ohio and Charlotte have allowed more.

WHO CARES. Injuries in football are going to happen. AND you can’t have 3 years of bad luck. Eventually it comes down to being detailed and drilling and not accepting subpar play. College Football is a brutal business.

Louisville fans aren’t going to sit idle and watch John L. Smith go to Michigan State, Bobby Petrino go to the Falcons, Charlie Strong go to Texas because “That’s the way it is”. And then watch Scott Satterfield interview at South Carolina after the 2019 and Bryan Brown interview at Tennessee after 2020 and then the fans are expecting to have undying loyalty for a product that everyone knows isn’t good enough?

It’s a job, get it done. This is college football.

It is bad luck that Jermayne Lole and Dee Wiggins are out for the year. It’s terrible luck that Caleb Chandler, Ashton Gillotte and Tiyon Evans have nagging injuries. But it doesn’t matter because Louisville Football won just 4 games in 2020 and squandered 4 wins in 2021 while going 6-7. Louisville is just 3-6 in its last 9 games where it is leading or tied going into the 4th quarter.

North Carolina has had dramatic improvement on its offensive line with Jack Bicknell. Maryland’s passing offense is #19 in the country!

In 2021 defensively Louisville was 77th in scoring, 83rd in yards allowed, 94th in passing defense, 73rd in rushing defense, 61st in Opponent 3rd down, 110th in Red Zone Conversions Allowed, and 88th in Yards Per Play Allowed.

It was clear that defensive changes needed to be made……. and they weren’t. Bryan Brown came back. Cort Dennison was already gone and was replaced by Wesley McGriff and nothing else changed. Louisville has some really nice defensive parts and players….. but this defense is NOT getting the job done. And now it’s not getting the job done against bad offenses.

Louisville is just 3-6 in its last 9 games where it is leading or tied going into the 4th quarter. Not much more to say than that.

The Schedule Gets More Difficult From Here

Pitt was ranked. Wake Forest just beat Florida State in Tallahassee, James Madison has the #1 defense in the country, Clemson is a College Football Playoff Contender, NC State was ranked #10 in the country earlier this week and Kentucky was ranked #7 before losing to Ole Miss in Oxford.

Louisville is 2-3 overall and 0-3 in the ACC. If they want to turn things around they are going to have to play much better football against much better competition.