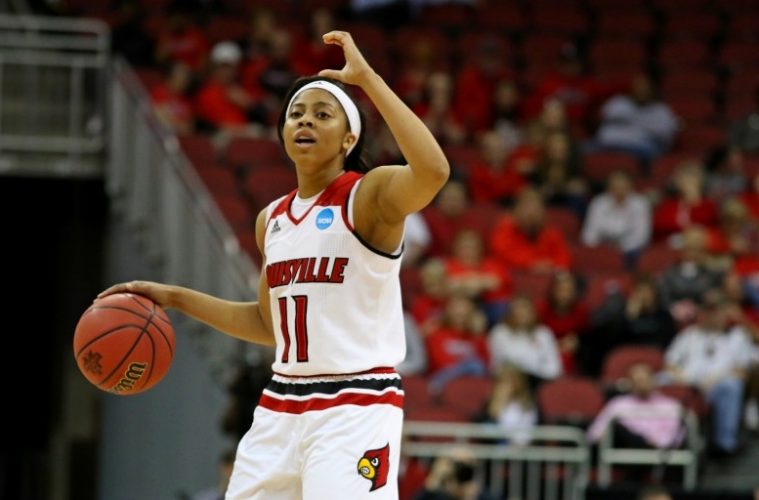 Entering Sunday’s contest the question was not whether the Cardinals could contend with the Blue Devils, but rather if they could defeat the curse of Cameron Indoor Arena. The Louisville women entered the game 3-3 all-time against Duke but 0-3 when playing at Cameron Indoor. After an unanticipated nail-biter against the Tar Heels last Thursday the focus shifted to preventing a similar defensive collapse and putting together what Jazmine Jones termed a complete game. With Asia Durr’s relative cold spell continuing into Sunday, one would not be blamed for seeing the potential for continued disappointment in Durham.

Arica Carter was having none of that and set the pace for the Cardinals in the first quarter by starting the game 4-4 from beyond the three point arc. Louisville’s hot start from the perimeter opened up opportunities down low and throughout the first half the Cards would penetrate the Blue Devil zone with ease. Sam Fuehring’s post play would combine with Carter’s perimeter shooting to account for all Cardinal points from the field in quarter one. Concurrently the Cardinal defense held the Blue Devils to just 20% shooting and an abysmal 1-9 from three point range.

But the laws of thermodynamics govern all life, and the Card’s hot start quickly cooled. Duke would improve shooting and cut an early 16-4 deficit to 35-23 by the end of the half. The tale of the tape, however, could be found in ball handling as opposed to shooting. Even with Walz’s stated focus on rebounding margins the Cards found themselves out-rebounded 23-15 at the half. Contrast this with Duke’s willingness to give the ball up with 15 turnovers to Louisville’s 7. The complete game continued to be elusive for the Cards but the buffer established by Carter’s lights out shooting would prove to be crucial, finishing the first half 5-9 from the field and 5-7 from beyond the arc.

Fortunately, a repeat of Thursday night’s second half collapse was not to be the Cardinal’s fate on Sunday. Dana Evans would pick up where Arica Carter left off, scoring 13 second half points on her way to 16 points and 4 assists. The Cardinal rebounding woes were mitigated somewhat in the second half and the Cards would finish down only five with 34 to Duke’s 39. And Duke’s crippling turnover margin would haunt them just as it did in the first half, although Louisville could definitely have handled the ball better for their part. The cherry on top, satisfyingly, would be a second half awakening for Asia Durr who at last would find success on her way to 13 points and 4 assists. Each time Duke threatened offensively the Cardinals would quickly answer back and by the fourth quarter the decision seemed assured. Duke would finish shooting 31% from the field and only 2-13 from beyond the arc.

Top honors belong to Arica Carter who finished with a career-high 23 points. Duke would never find a way to shut down the Cardinal perimeter shooting with the Cards going 12-24 from beyond the arc, with Arica contributing 7 of the 12. Perimeter shooting opened up numerous opportunities down low where Sam Fuehring and Kylee Shook combined for 13 points on the day, but with the hot hands from outside belonging to Carter, Evans, and Durr there was little need to crush it inside the paint. The Blue Devils leading scorers Gorecki and Odom would do as they do with 31 of Duke’s 51 points, but the turnover margin, poor overall shooting, and 15 steals by the Cards would have doomed the home team even in spite of the Cardinal shooting exhibition.

If Jeff Walz was looking for a complete game from his squad he could probably point to this game with only a few exceptions. Rebounding is an absolute must if the Cardinals expect to have any success against Notre Dame this coming Thursday, and no doubt it will be a focus in practice over the next few days. Asia coming alive in the second half definitely calms certain fears, but out of that drought we’ve seen massive contributions from both the other starters and the bench. Combine this with Durr’s unselfish play and assist/turnover ratio and it becomes difficult to refer to it as an actual drought.

But as noted, the big test comes on Thursday against the 13-1 Fighting Irish in South bend. As this goes to post, the Irish are having no trouble dispatching Georgia Tech, and so it seems likely that the undefeated Cardinals could face off at Notre Dame in a #1 vs #2 match-up. Shooting is not even close to half of the equation when seeking victory against the Irish, although it of course cannot hurt. The Cardinals will have to find a way to crash the boards hard and shut down senior forward Jessica Shepard who leads the Irish with 9.7 rebounds a game. Overall, Notre Dame averages 44.1 rebounds per game while holding opponents to 33.4. While gaps against weaker opponents such as Duke and North Carolina allow for some wiggle room, anything short of the sought after complete game for the Cards would certainly spell defeat in South Bend.