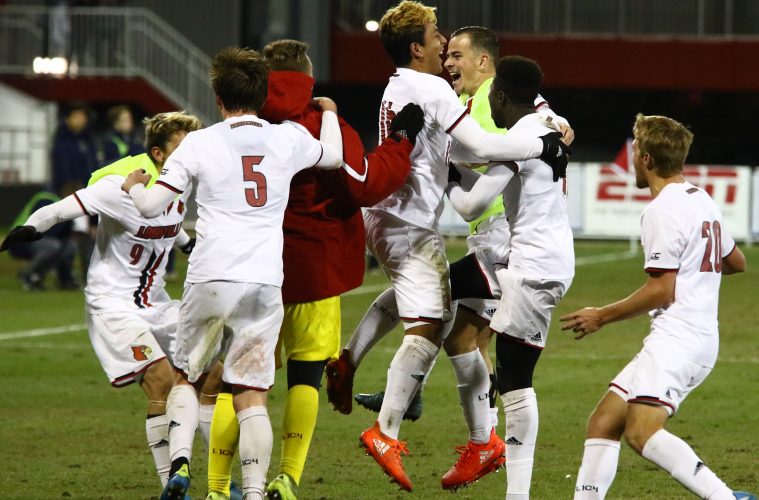 For the second consecutive week, sophomores Danny Reynolds and Tate Schmitt combined for the decisive goal as the No. 4 University of Louisville men’s soccer team clinched its fourth NCAA Championship quarterfinal berth in the last seven seasons with a 3-1 victory over No. 13 Notre Dame in Sunday night’s third round match at Dr. Mark and Cindy Lynn Stadium.

With the score even at 1-1 in the 71st minute, Reynolds delivered a corner kick to the top of the six-yard box where Schmitt connected on a header scoring inside the left post to push the Cardinals (14-5-2) ahead for good. In last Sunday’s second round win over UCLA, Schmitt was on the receiving end of a cross from Reynolds before scoring on a header to lift Louisville to the overtime triumph. Along with Schmitt’s decisive goal, junior Mohamed Thiaw connected for a first half goal and freshman Cherif Dieye added a goal in the final 10 seconds of the match for the home side.

The Cardinals, playing in the Elite Eight round of the NCAA Championship for the first time since making three straight appearances from 2010-12, will host No. 5 Stanford on Saturday at 7 p.m., ET at Lynn Stadium with the winner advancing to the 2016 NCAA Men’s College Cup in Houston, Texas. Tickets for Saturday’s NCAA quarterfinal match against the Cardinal, the reigning NCAA champion who advanced with a 1-0 double overtime win against No. 12 Virginia, are priced at $10 for reserved chairback seats and $5 for general admission/berm seating and can be purchased online at GoCards.com, by phone at 502-GO-CARDS or in person through the Louisville Cardinals Ticket Office at Papa John’s Cardinal Stadium.

In the second meeting this season between the Cardinals and the Fighting Irish (12-7-2), UofL broke through for the first goal of the night when Thiaw followed his own shot off the crossbar by corralling the rebound and scoring inside the far right post for the 1-0 lead in the 16th minute. Junior Tim Kubel started the chance with a well-played ball down the center of the field to Thiaw, whose initial attempt from 14 yards out caromed off the crossbar. The rebound bounced once before Thiaw delivered a strike from 12 yards away for his team-leading 12th goal of the season, the most for a Louisville player since Simon Bird’s 12 goals in 2003.

The Cardinals, who earned a 1-0 victory over the Fighting Irish in their regular season match at Lynn Stadium on Sept. 16, maintained the one-goal edge into the second half before Notre Dame connected on the equalizer in the 54th minute when Jon Gallagher, who made a run down the center of the field, worked past charging Louisville goalkeeper Stefan Cleveland and scored into an open goal from 18 yards out. The goal was the 14th of the season for Gallagher, the ACC Offensive Player of the Year.

The score remained level for more than 16 minutes before Schmitt delivered his second game-winner in as many weeks and the sixth of his collegiate career. Overall, it was the fifth goal of the season and the 12th in two years with the Cardinals for Schmitt, while Reynolds was credited with his sixth career assist.

Louisville fought off all of the ensuing challenges from the Fighting Irish before adding the final tally of the night with just six seconds left in the match when Dieye received a pass off the heel of Thiaw from the six-yard box and scored inside the near right post from nine yards away for his fifth goal of the season. Senior Daniel Johnson created the chance with a charge down the center of the field before feeding the ball to Thiaw along the right side of the 18-yard box.

The Cardinals finished the night with an 8-7 edge in shots while shots on-goal were even at 4-4. Louisville also closed the match with a 6-3 advantage in corner kicks.