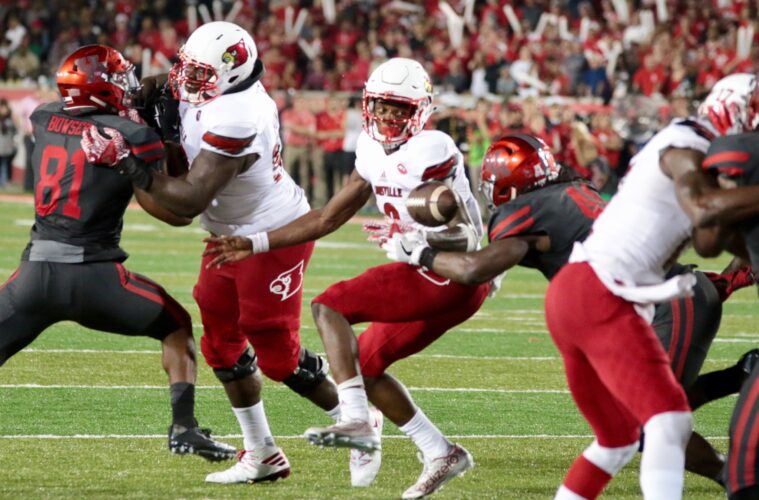 So……. What Happened To Louisville Football?

Louisville lost to Kentucky……. in Football?  Yeah that happened.  It was the first win for the Cats in the Governor’s Cup in 6 tries and it was a bitter conclusion to one of the more exciting seasons in Cardinal Football history.

The Cards didn’t finish its final 3 games with the same vigor that it played the 1st nine games of 2016. Louisville hasn’t looked like itself since it left Boston on November 5th.  UofL struggled for 3 quarters before exploding vs. Wake Forest, was absolutely ineffective after a short week on the road at Houston, and then Lost to Kentucky…… at home…. Kentucky….. in football.  We even saw some precursors at Virginia on October 29th.

Let’s give credit where it’s due.  Wake Forest, Houston & Kentucky are all bowl teams and each of them had wonderful game plans against the Cards.  Tip your cap.  Individually these 3 games can happen as these are 18-23 year old kids.  But the late season woes that caused the Cards to limp home in the latter half of 2016 have more to do with LOUISVILLE than it does Virginia, Wake Forest, Houston or Kentucky.  The Cards showed that they are capable of being DOMINANT, but they have flaws, inconsistency, inexperience and other factors that go into the slide that terminated the excitement of the 2016 regular season

Louisville’s first 5 weeks were a blitzkrieg of excitement.  The Cards took the nation by storm because it had the stage & talent to grab the attention.  The coaching staff & players both knew this and came into the season extremely prepared.  UofL had just 3 weeks to get ready for Florida State and it was apparent that everyone in the program had a laser focus going into that game.  Then two weeks later the Cards had an even bigger opportunity on the road at Clemson.

Preparing for FSU & Clemson is much different than preparing for Virginia, Duke or Wake Forest.  Each of these are conference games, but the urgency with which Louisville had to be ready for the Seminoles & Tigers at the beginning of the season just felt different than what we saw in mid to late October & beyond.

Secondly, Louisville did itself a disservice by playing Houston on the road after ACC play had concluded and BEFORE Kentucky.  It’s fine to go on the road to play Houston but the school & the ACC both need to be mindful that playing a road non-conference game on a short week AFTER conference play is over AND BEFORE rivalry week is just a horrible idea.  Not to mention the fact that Houston is a wildly capable team and waited all season to play the Cards after dispatching Oklahoma.  The timing of the game with the Cougars was horrendous, it had everything a program DOESN’T want on paper.

Moving forward Louisville & the ACC need to work together on spacing marquee match-ups throughout the schedule for ultimate influence on the College Football Playoff committee.  It’s important to have credibility at the time of the 1st rankings release but there really still needs to be a carrot out there OR a profile booster in mid-to-late November.  The ACC Championship is intended to be that way, but until the ACC Coastal wants to put together a representative that might sniff the New Year’s Six it may be important for the league to foster a favorable environment for its membership that might actually be able to compete for the College Football Playoff.  Louisville playing Clemson & Florida State in the first 5 weeks of the season didn’t do anyone any favors when it mattered the most.

Take a look at the Cardinal Football roster.  There are a lot of Seniors that are just two-year players for UofL Football:  Jamari Staples, Cole Hikutini, Kiola Mahoni, Khalil Hunter, Josh Harvey-Clemons, Devonte Fields.  That’s a solid core of starters who really just arrived at Louisville to help bridge the gap of Louisville losing 10 Draft Picks to the 2015 Draft (after the 2014 season).  Overall this group did an admirable job, but they’ve still only been in the program for two seasons.

Additionally tons of sophomores have just been in college football for two years as well: Jaire Alexander, Lamar Jackson, Jaylen Smith, Geron Christian, Traveon Samuel, Dee Smith, Kenny Thomas, and Devante Peete are all key players for Louisville that have been thrust into roles REALLY early on in their careers.  Each player listed is a TRUE SOPHOMORE.

Also, this is just Louisville’s 3rd year in the Atlantic Coast Conference.  Competing to win the ACC Atlantic and being considered for the College Football Playoff is a very new occurrence for the program but the Cards found themselves in that position in 2016.  There is something to be said about ‘being there before’.  Despite reservations about using a basketball reference, Rick Pitino has discussed numerous times of the benefits that the 2012 Final Four appearance that were paid forward during Lousiville’s 2013 National Championship run.   Louisville will play in an elevated Bowl Game in about a month and the New Year’s Six is the exact type of stage that could have prepared and propelled the Cards to have the desired experience to conclude this season.  Cardinal fans should hope for the best opponent possible especially if the New Year’s Six is off the table (it probably is).

The turnovers happened all season but the Cards weren’t punished with losses in each game.  It took a historic season from Lamar Jackson and the #2 Offense in the country to keep Louisville’s record at 9-3.  Virginia and Duke could easily have gone the other way for the Cards as UofL flirted with disaster on many occasions….. it was just a matter of time before it doomed UofL Football.

Louisville’s defense actually was 14th in taking the ball away with 24 turnovers forced this year. Even despite a really healthy performance from the defense the Cards have a -7 Turnover Margin for the 2016 season.

The numbers on the turnovers are historic.  Louisville is 125th of 128 in Turnovers Lost with 31. The three teams worse than Louisville in Turnovers Lost are all missing the post-season Bowling Green (4-8), Purdue (3-9), Kansas (2-10). We’ll have to go back into the archives to find out how many teams in history have had a -7 or worse turnover margin and won 9+ games.

Coach Petrino has stated that he has worked more on ball security this year than any other.  You can bet that this will be an area of emphasis during bowl prep & throughout Spring.  Lamar Jackson’s fumble against Kentucky inside the 10 with 1:45 to play was the most costly…and the most unnecessary.  But this is a team issue that resulted not only in losses, but many of them caused frustration and eliminated momentum at critical times.  Louisville needs to clean up the turnover problem.

A lot of the talk before & during Fall Camp was that the biggest concern was losing a cornerback.  Everyone felt good about Jaire Alexander, Trumaine Washington & Shaq Wiggins, but there was concern about the need to develop corners 4 & 5.  Ronald Walker did a nice job of developing throughout the season, but the Cards have had to manage injuries with Shaq Wiggins for the balance of the season.

The Cards really struggled with its 2nd unit overall defensively throughout 2016.  When UofL pulled the starters in early blowouts UofL allowed POINTS.  It didn’t alter the outcome at all, but Louisville gave up yards and plays late in games that did happpen with the first unit.  So when the Cards started losing starters for a game, a quarter or even a series…. it showed.  And it really showed on Saturday vs. Kentucky when Louisville had a rash of injuries and could not stop the #57 Total Offense in the country.  Louisville gave up more yards to UK than it did to any opponent (581 yards) since 12/4/2008 vs. Rutgers.  That’s uncommon and if injuries and a lack of defensive depth isn’t the cause of this performance then we might like to know the reasons.

When there was the most on the line…… Louisville played the worst.  Does that have anything to do with pressure?  I’m not sure that’s true.  The competition was better in the final 3 games of the season, the Cards continued to turn the ball over against those better opponents, depth took its toll and UofL didn’t have the experience necessary to not let the wheels fall off when things started to go south.

In the end, the Cards have to play assignment football and be aware of game situations.  James Hearns and Devonte Fields routinely gave up huge lanes to Kentucky off the edge, there was almost no edge containment vs. Kentucky on Saturday.  Lamar Jackson can not fumble that ball inside the 10 vs. UK or in a critical 3rd quarter drive vs. Houston.  Dee Smith can’t get caught looking on play #1 vs. UK, Malik Williams can’t fumble on the kickoff vs. Houston, Jaylen Smith can’t fumble play #1 vs. Wake Forest.

Louisville has a turnover problem, a penalty problem and a keeping defenses out of its backfield problem.  That doesn’t have anything to do with the Heisman or the College Football Playoff.

Every year Texas A&M and Baylor start hot and then come back down to earth as they fade down the polls.  Louisville can not repeat this season’s ascent early and decline late or they risk being thrown into this category as teams who have incredible offenses, Heisman winning QBs and brand new renovations to its stadiums, but who actually don’t contend for the College Football Playoff. It’s just one year and its just Year 3 of Bobby Petrino and Louisville in the ACC so it’s early.  But that’s not a reputation the Cardinal Football Program wants.

Personally I’ve only ever seen two Bobby Petrino teams come into a game completely unprepared:  2005 vs. South Florida & 2016 vs. Houston.  Both were on the road and in both games the Cards just didn’t compete.  After 7 years of watching Petrino coach football at Louisville that’s his staple: Competitive and Prepared.  South Florida in 2005 and Houston this year are just exceptions.  Petrino does need a signature road win (he’ll have his chance vs. Florida State in 2017) as his best road win in his 7 seasons at UofL is at Notre Dame and has yet to beat a ranked team on its home field.  The best neutral site win is #10 Boise State (2004 Liberty Bowl). Bobby Petrino needs to beat Clemson……anywhere, home or away doesn’t matter.  Coach Petrino has been incredible….these are just the next steps.

Louisville Football did a lot in 2016.  It captured its fans imaginations about the Heisman Trophy about the College Football Playoff and realized that the program can play and compete at the highest level of the sport.  But the program also found out how difficult it is to REMAIN at the top.  It’s not an easy task, but it’s a fight worth fighting.  If Louisville can solve some of these broader issues that we’ve discussed then it becomes just an internal battle of focus from every individual within the Howard Schellenberger complex.

The Cards have A LOT going for the program, but getting into the College Football Playoff is one battle.  Winning the National Championship is another.  For now the Cards will go into bowl season with a lot to prove and before they set their sights on 2017 will have one last opportunity to prove that they are the team that played the first 9 games this season….and not the final 3.