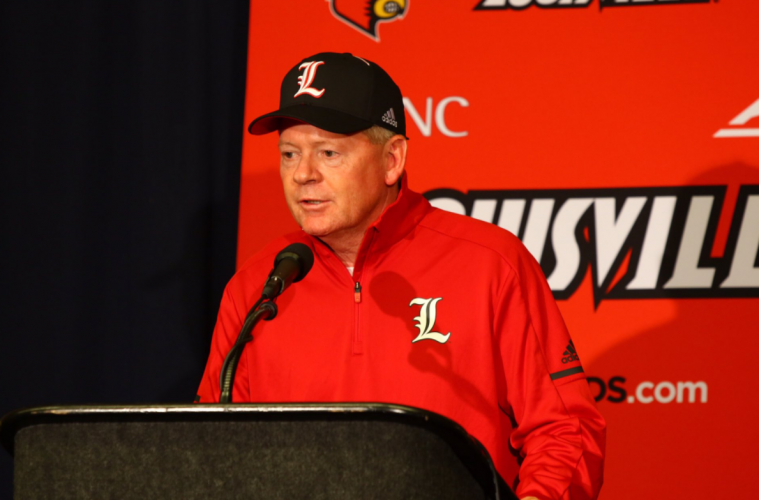 Louisville Head Coach Bobby Petrino spoke after the Cardinals 35-28 win over the Purdue Boilermakers to begin the 2017 season at Lucas Oil Stadium.

Louisville Head Coach Bobby Petrino
“We’ll take it. It was a hard fought game. The second half felt like we gave them opportunities and kept them in the game some when we didn’t score early. I was really disappointed in our penalties and turning the ball over. That’s what we’ve been harping on all fall and what we’ve been working hard on and that didn’t show.

“I was really proud of our defense. I thought they did a great job of making stops when they had to and had a great interception for a touchdown. They set up some good field position that we weren’t able to take advantage of like normally would.

“I thought we did throw and catch the ball well and did make a lot of plays. It was good to see different guys out there making plays. I thought in the fourth quarter Dez Fitzpatrick really gave us a huge, huge lift. He looked fresher and faster. Jaylen (Smith) was playing a lot of snaps. We really need to make sure we can rotate guys in there, particularly in the first half, because I thought he slowed down just a little bit. But obviously, he’s a very good player.

“I did think Reggie (Bonnafon) made some nice runs, but we weren’t able to make enough of them. We’ve got a lot of work to do, obviously. Our team stuck together and fought hard. When you’re not executing the way you want to execute, it challenges your poise and your leadership, and I thought we had a lot of leadership.

“I thought Lamar (Jackson) did what he needed to do to let us win. If we would have scored early, then we’re up here with a bigger smile on our face and excited about the fact that he threw the ball so well and made good decisions. We weren’t able to unleash him running the ball. They did a good job getting different guys to him and played wide on the perimeter. When they do that, we’ve got to be able to block the guys inside and hit some holes downfield with our running backs. We’ve got a lot of work to do on that. But what a great competitor. To see the way he competed and played, and the way he handled himself on the sideline. He truly just wanted to win the game.”

(on turning the ball over) “Some of it was our center. He’s a young freshman. They stemmed some on us and had a good plan. He didn’t hear the cadence a couple of times, but that’s so disappointing to me to have all of those false starts when it’s something that we worked extremely hard on. We did have two freshmen in there on our offensive line. I think they’ll both get better and grow up from this, but obviously, you’ve got to play better than that.”

(on Jaire Alexander’s injury) “Everyone on our sideline was shocked about it. I do think that the news is not bad. We’ve got to get the images and all that, but the initial report I got was that it’s pretty good. It was a really unbelievable play. I don’t know what triggered him to run and get the ball. We would get the ball back from where they kicked the field goal from with great field position. It was a really strange and a terrible way to get injured. But I think that he’ll be back. At least I’m encouraged that he will be.”

(on gaining contributions from inexperienced players) “That was one of the things I was encouraged about. There was no question to have Dez step up. He had a great spring game. He’s learning and getting better every day in practice. We’ve got a lot of confidence in him. Those (passes) were calls to go to him and made the play with all three of them. He made great plays for us to help us win the game. That was really good to see. I think Malik Williams did a good job. He didn’t get as many touches as he wants. He made a very physical run to get us close on a third down so I was happy to see that too.”