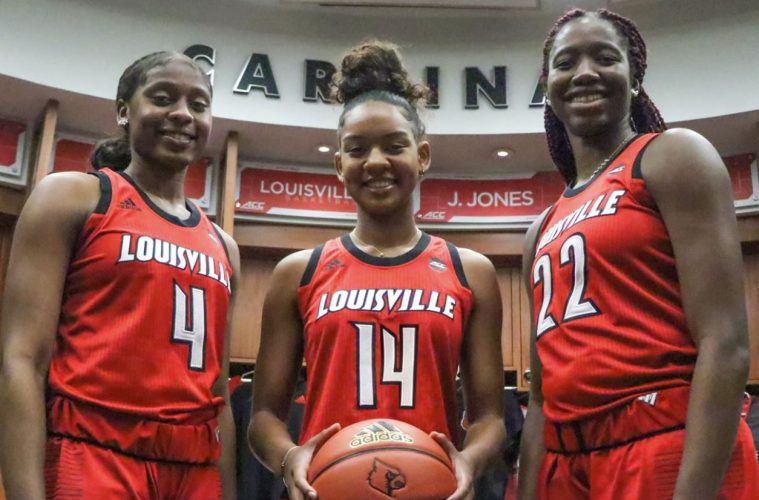 picture and story from gocards.com

BOOM!! We knew something was up when the entire team was tweeting today….

At about 9:30PM Sunday night… Jeff Walz and the Louisville Women’s basketball program announced that it’s adding 3 transfers to this next class of Cards.

LOUISVILLE, Ky. – University of Louisville women’s basketball announced that they have added three transfers to its 2019 class – Elizabeth Balogun and Elizabeth Dixon of Georgia Tech, and Kianna Smith of California.

They will be joined in the 2019 class by three incoming freshmen, Nyah Green, a 6-foot-1 guard from Allen, Texas, Ramani Parker, a 6-foot-4 forward from Fresno, Calif., and Norika Konno, a 5-foot-10 guard from Sendai, Japan.

Balogun and Dixon come to Louisville after spending their freshman season at Georgia Tech. Balogun was named ACC Freshman of the Year, while Dixon was named to the All-ACC Freshman team. Smith played two seasons at California and helped lead the Bears to two trips to the NCAA Tournament.

“Elizabeth is an explosive, versatile guard that led all ACC freshman in scoring, while garnering the ACC Rookie of the Year award. She is a determined worker and can score from beyond the arc, midrange and at the rim. With her size, length, and passion to play the game, she has all of the tools to rank among the nation’s elite,” said head coach Jeff Walz.

She started all 30 games for the Yellow Jackets, averaging 14.6 points per game, which led the team and ACC freshman, and ranked eighth in the country among freshmen.

She scored a career-high 35 points at North Carolina, which marked the third highest scoring output for a freshman in Georgia Tech history.

With 437 points last season, Balogun scored the seventh most points as a freshman in Georgia Tech history.

She attended Hamilton Heights Christian Academy in Chattanooga, Tenn., and was named a McDonald’s All-American. She was named All-USA Tennessee Player of the Year and was tabbed a Naismith Trophy High School All-American.

Dixon is a 6-foot-5 forward out of Memphis, Tenn. She was tabbed to the All-ACC Freshman team, along with Balogun, and three times was named ACC Freshman of the Week.

“Liz is a versatile and powerful forward that can play inside and out. She has great hands, an explosive quick jump and is a relentless rebounder. She is hungry to learn and develop her game and will be an immediate impact player on our front line,” said Walz.

She started all 30 games for the Yellow Jackets and was second on the team and first among ACC freshmen in rebounding with 6.4 per game. She ranked third on the team in scoring with 11.0 points per game.

She finished the year with 192 rebounds, which ranks fourth all-time among freshmen in Georgia Tech history.

Dixon recorded her first career double-double in just her third game with 13 points and 10 rebounds vs. Western Carolina. She finished with four double-doubles on the season and against Duke on Jan. 10, she recorded her fourth double-double of the year with a career-high 22 points to go with a personal-best 17 rebounds.

Dixon was a multi-sport athlete at Ridgeway High School in Memphis, Tenn., competing in basketball and track and field. She was named a McDonald’s All-American and was a two-time all-state, all-district and all-region performer. She was tabbed All-USA Tennessee first team as a senior and All-USA Tennessee second team as a junior.

Smith is a 6-foot guard out of Moreno Valley, Calif, and in two seasons at Cal she scored 600 points, knocked down 91 3-pointers and dished out 244 assists, while helping the Bears to two 20-win seasons and two trips to the NCAA Tournament.

“Kianna is a leader and a winner. At six foot tall, she is a long point guard with an exceptional shooting touch. She is an extremely intelligent player because she was raised around the game. Her father John Smith is the head men’s basketball coach at Cal Poly San Luis Obispo and her uncle Steve Smith has coached for several teams in the WNBA,” said Walz.

In her first season at California, she was named Pac-12 All-Freshman team and three times was named Pac-12 Freshman of the Week. She played in all 32 games with 31 starts as a freshman, ranking fourth on the team in scoring with 8.6 points per game and leading the team and conference freshmen with 4.8 assists per game.

As a sophomore, she was named Pac-12 All-Academic honorable mention for her strong performance on the court and in the classroom. In addition to putting up a 3.29 cumulative GPA, she started all 33 games for the Bears, while averaging a career-high 9.8 points per game.

She finished with 14 double-figure scoring games and matched a career-high with 20 points, while shooting 5-6 from 3-point range against Oregon. She then led the team with 18 points on 7-13 shooting, 2-4 from deep, in California’s second round loss in the NCAA Tournament to eventual national champion Baylor.

Smith connected on at least one 3-pointer in 28 of 33 games, while shooting a career-best 35 percent from downtown and knocking down a career-best 55 threes.

Smith attended Troy High School in Fullerton, Calif., and was named a McDonald’s All-American selection. She averaged 21.3 points, 5.5 rebounds 3.7 assists and 2.6 steals during her senior season at Troy and was named First Team All-State, All-CIF and All-Orange County.