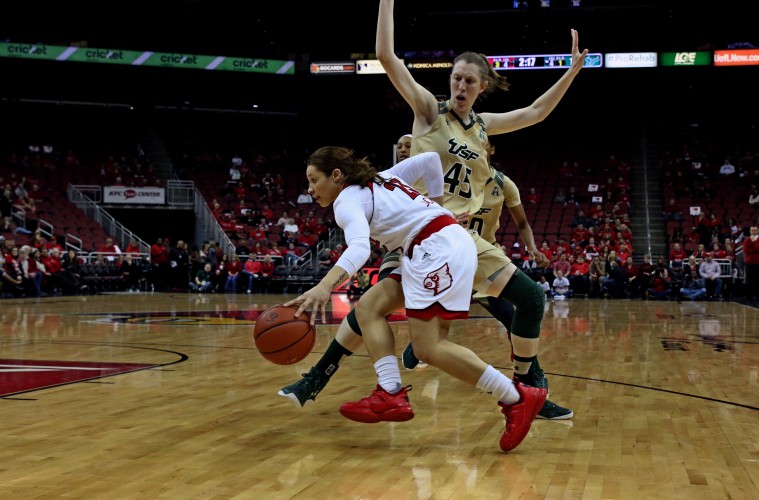 The No. 11 University of Louisville women’s basketball team is playing its second home game in four days, when it takes on Virginia on Thursday night at 7 p.m. in the KFC Yum! Center.

The Feb. 18 contest, which will be a ‘Pink Out,’ will tip at 7 p.m. ET and air on ESPN3, with Don Russell (play-by-play) and Sara White (analyst) on the call. The radio broadcast will be available on WKRD 790 AM (also on TuneIn) in Louisville, with Matt Andrews (play-by-play) and Adrienne Johnson (analyst) calling the action.

Fans are encouraged to wear pink for the Play4Kay contest. Louisville will wear pink accessories for the game in promoting breast cancer awareness and celebrating the life of former NC State women’s basketball head coach Kay Yow. Breast cancer survivors will be celebrated during a halftime ceremony.

Louisville (20-6, 11-1 ACC) defeated No. 19 South Florida 67-50 in a non-conference matchup on Monday night in the KFC Yum! Center. The Cardinals scored 23 points on 20 South Florida turnovers. Louisville also held the Bulls to a season low in total points (50) and limited them to just seven points in the fourth quarter, also a season low.

Myisha Hines-Allen registered her eighth career double-double, with 25 points and 10 rebounds. Mariya Moore scored seven of her 19 points in the fourth quarter, and Arica Carter compiled a career-high 15 points, connecting on 6-of-9 field goal attempts.

Hines-Allen is Louisville’s leading scorer, averaging 15.8 points per contest, which ranks fourth in the ACC, and is shooting 53.4 percent from the floor. She also ranks first on the team in rebounding at 7.5 per game, fifth best in the conference. Moore has a team-leading 121 assists on the season and is fourth in the ACC in assists per game (4.65). Jackson is pacing the Cardinals in steals (59) and is fifth in the conference in steals per game (2.27).

The Cavaliers scored 17 points on 17 turnovers Boston College turnovers. Virginia also limited the Eagles to just eight points in the third quarter and held a 40-33 advantage on the glass.

Mikayla Venson logged a game-high 19 points and made 3-of-4 3-point attempts. Lauren Moses registered a double-double, with 11 points and a game-high 15 rebounds. Aliyah Huland El scored 13 points in 25 minutes off the bench.

Venson is Virginia’s top scorer, averaging 15.3 points per game (seventh in the ACC). She also leads the team in assists, averaging 2.85 per game. Moses is pacing the Cavaliers in rebounds (189) and is top 15 in the conference in rebounds per game (7.3). She has a team-high 47 steals on the season.

Virginia ranks first in the ACC in free throw percentage (74.9 percent) and 22nd nationally. The Cavaliers are also third in the conference in turnover margin (+3.54) – 41st nationally – and force 19.12 turnovers per game, which is good for fourth in the ACC and 40th nationally.

Louisville registered its first road win of the series against Virginia on Jan. 14, as it defeated the Cavaliers 59-41 at JPJ Arena to tie the series at 2-2.

Louisville limited the Cavaliers to just six points in the opening quarter and held Virginia to 2-of-8 shooting from the field. The Cardinals scored 23 points on 19 Virginia turnovers and outscored the Cavaliers’ bench 18-4. Myisha Hines-Allen had a game-high 16 points off 6-of-10 shooting from the field and grabbed seven rebounds. Mikayla Venson scored 13 points for Virginia, but shot just 5-of-14 from the floor.