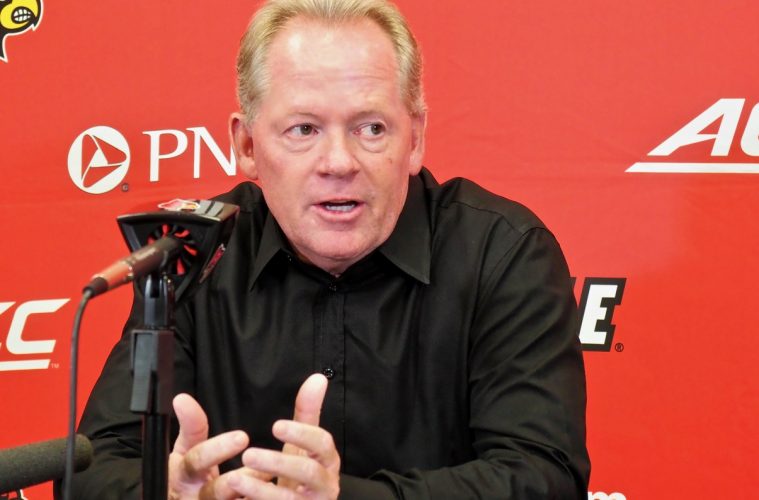 THE MODERATOR: We are now joined by Louisville head coach Bobby Petrino.

Coach, if you could make an opening statement, then we’ll take questions.

BOBBY PETRINO: We’re excited to go down to Orlando and play a great football team with a tremendous tradition and the defending national championships in Alabama. I do like what we’ve done in camp. I think our guys have done a nice job. We’ve gotten better. We improved, worked hard. We know we have a great challenge ahead of us. We just got to do things right here for the rest of the week, do a great job on our traveling, getting prepared for the game, go out and compete.

Q. With the new NCAA rule in regards to redshirt, how concrete are your plans? There’s some kids you want to get two, three, four games, how much because the rule is new, is it fluid?
BOBBY PETRINO: Yeah, we’ve got a group of kids that we say, Hey, these guys got a chance to help us win games this year. Let’s play them now. After the third game, sit down and decide whether we think they’ll continue to play for the year or play one more game and then redshirt. Then we have a group of guys we feel aren’t prepared right now to play either physically or mentally, but our plans were to redshirt and maybe play them the last four games of the year.

Q. I’ve seen some of the quotes that have come out of camp and practice. There certainly doesn’t seem to be an intimidation factor with Alabama. Have you kind of encouraged guys to be like, This is a game we can win, let’s be confident? Some coaches are more concerned about board material. Has that been something exclusively because this is Alabama and you want them to be more confident?
BOBBY PETRINO: My mom used to tell me all the time: Don’t believe anything you read and only half of what you see.

Obviously our players have said a few things where only parts of it have been taken and used as a quote. For instance, last night one of our offensive linemen said, I think we’re very capable if we do these things right of having dominating performances. Then they obviously wrote it something different.

We know we’re playing a great football team. We know how well-coached they are, the quality of players that they have. We do need to go in and compete and believe that we have an opportunity to win and play that way, play with that type of confidence.

Q. You’ve talked in the off-season about how you felt the offensive line is probably the best one that you’ve had since you’ve been back there. Do you feel the players sense that and know that as well going through practice, and that has given the confidence to believe they are capable to be able to do well against Alabama?
BOBBY PETRINO: Yeah, I think we feel like it’s the best offensive line that we’ve had because of the experience that we have coming back, the size and the strength. When you look at Makhi Becton, Lukayus McNeil playing next to each other, had both good years last year, on the other side you have Kenny Thomas back, he started almost every game last year for us. It’s a group that has confidence.

Obviously one of the strengths of Alabama has always been their defensive front, how big and athletic they are. It will be a great challenge for us and we’ll get to find out where we’re at.

Q. Obviously Alabama’s quarterback situation has gotten the most attention about them this summer. As you prepare for them, what concerns you the most? What has been keeping you scratching your head in recent weeks?
BOBBY PETRINO: I mean, everything. They’ve got great players. They’re very well-coached. They have two quarterbacks that are capable of throwing the ball and running the football. That always concerns you when you go into a game, is the ability of the opposing team’s quarterback to take off and make plays with his legs. Sometimes you get things covered, then the quarterback just makes a play. That’s obviously a concern. We’re going to have to be disciplined in our pass-rush lanes and understand their running game that they have with their quarterback.

We’ve got to be able to take care of the football, not turn it over.

Q. Going to the matchup on the other sideline, what can you say about Nick Saban, what he’s done nationally, what you can say about respect coach to coach?
BOBBY PETRINO: Yeah, I mean, he’s just done a tremendous job in being able to lose coaches, replace them, not miss a beat. I think that’s one of the things that’s really, really impressive. Coaches that have been coaching for him get head jobs or move on, and he replaces them, they don’t miss a beat. Obviously he’s done a great job of leadership. The program has great players. They’re really, really well-coached.

Q. As far as your quarterback, what can you say he’s done? How has he come through the fall? What have you seen him do as far as evolution at this point?
BOBBY PETRINO: He’s done a nice job. Been really working hard on him, understanding each play, he has a decision to make, then he needs to execute his job. I think he’s getting better at that, really focused in on, I’ve got to make the right decision. That goes from staying with a good run play or checking out of it, reading the curl flat defender. You also have to be able to make the play, make the throw, get the proper footwork, get the ball to the runningback at the right spot.

I think he’s concentrated very hard on doing things right. He’s always been a guy that’s been in the classroom, likes the game a lot, studies it a lot. So I think he’s excited to get going. We just got to make sure that he relaxes and plays and does the things that he does well.

Q. How do you prepare for two quarterbacks that Alabama might be throwing at you on Saturday night?
BOBBY PETRINO: We know there’s certain things that Alabama is going to do offensively no matter who the quarterback is. Things that they believe in in the run game, things that they believe in in throwing the ball, situational work. Then you also got to prepare for the things that the two guys do exceptionally themselves, what they like to do. That’s kind of a little bit harder as far as the young guy only played one half, so it will be interesting to see how they play it out.

We’ve got to go out and understand who’s in the game, understand their formations, splits, tips that we get, then play fast with no hesitation. I think that’s the biggest thing, we have to be able to play fast.

Q. Orlando, the humidity, very hot. How do you keep your players ready to go for that?
BOBBY PETRINO: That’s always a concern in the early parts of the season. Fortunately for us, this is a hot, humid place, a lot like Orlando, as is Alabama. I think we’re acclimatized. You got your nerves up and you get anxiety. We’ve got to be able to handle that, do a great job of hydrating, getting prepared for a game in the heat.

THE MODERATOR: Coach, thank you.