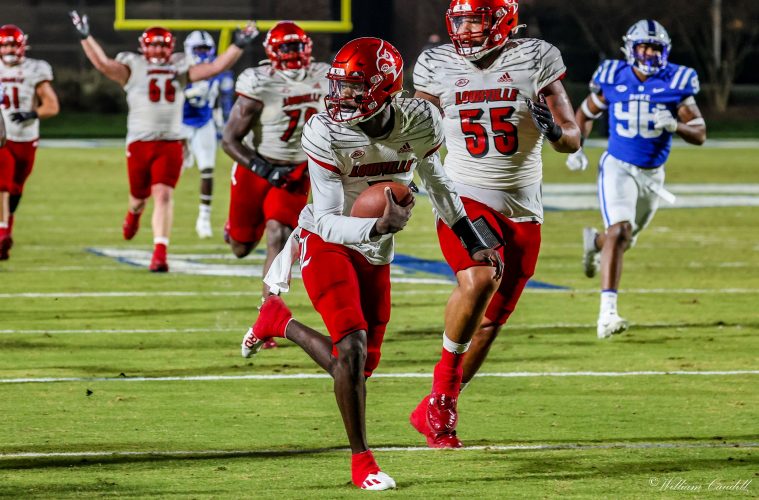 QUARTERBACK – Malik Cunningham, Louisville, Jr., QB, Montgomery, Ala.
Passed for 303 yards and five touchdowns while rushing for 224 yards and two more scores in Thursday night’s 62-22 win over Duke • Became the second player in FBS history to pass for 300 yards and rush for 200 yards in a game, joining Washington’s Marques Tuiasosopo versus Stanford on Oct. 30, 1999 • Cunningham (303/224) finished with higher totals than Tuiasosopo (302/207) in both categories • Cunningham’s 527 total yards marks the fourth-highest single-game total by a Louisville player • Second player in Louisville history to be responsible for seven touchdowns in a game (Lamar Jackson had three such games) • The 224 rushing yards fell just two yards shy of Jackson’s record for rushing yards by a UofL quarterback • Cunningham set the Louisville record for yards per carry in a game by a player with at least 10 attempts, averaging 20.4 on just 11 carries.

RUNNING BACK – Kobe Pace, Clemson, So., RB, Cedartown, Ga.
Rushed for a career-high 191 yards on 24 carries with two touchdowns in Saturday’s 48-27 win over No. 10 Wake Forest • The rushing total marked the highest by a Clemson player since Travis Etienne’s 212 yards against Wofford in 2019 • Pace joined Will Shipley (112 yards) to give Clemson multiple 100-yard rushers in a single game for the first time since 2018 • Second ACC weekly of honor of the 2021 season.

RECEIVER – Jordan Addison, Pitt, So., WR, Frederick, Md.
Led the way in Saturday’s 48-38 win over Virginia that lifted the Panthers to the Coastal Division title and a berth in the Subway ACC Football Championship Game • Hauled in four touchdown catches, including a victory-clinching 62-yard score with 2:10 left • Totaled 202 receiving yards on 14 catches • Became the first Pitt player to reach 200 receiving yards since Larry Fitzgerald in 2003 • Four TD catches tied the Pitt single-game record set by Julius Dawkins in 1981 and tied by Billy Davis in 1994 • Leads the nation with 15 touchdown receptions • Per Pro Football Focus, Addison leads the country with 18 catches of 20-plus yards.

DEFENSIVE LINEMAN – Keir Thomas, Florida State, Sr., DE, Miami, Fla.
Named ACC Defensive Lineman of the Week for the second time after setting a career high with 3.0 tackles for loss and tying a career-high with 2.0 sacks in FSU’s 26-23 win at Boston College • Led the country with 11 QB pressures in Week 12 • Ranks sixth in the conference with 12.0 tackles for loss, including 7.5 TFL and 5.5 sacks over the past four games • Led the Seminole defense to a season-high 11.0 tackles for loss versus BC • The Eagles’ three first-half points were the fewest allowed by FSU in a road game since 2017.

LINEBACKER – Drake Thomas, NC State, So., LB, Wake Forest, N.C.
Led the Wolfpack in tackles in Saturday’s 41-17 win over Syracuse, helping NC State maintain an undefeated home record and kept alive its hopes of an Atlantic Division title •  NC State held Syracuse to just 236 yards of total offense and just 66 passing yards • Intercepted his third pass of the year (tied for fourth in the ACC) and returned it 38 yards for a touchdown • While playing 60 snaps at middle linebacker, racked up eight tackles • Made 2.5 stops behind the line of scrimmage and 2.0 sacks • Earned a 91.7 grade from Pro Football Focus, tops among all Power Five linebackers in Week 12 • Honored as ACC Linebacker of the Week for the second time this season.

DEFENSIVE BACK – Akeem Dent, Florida State, Fr., S, Pahokee, Fla.
Had three tackles, a pass breakup and his first career interception in Saturday’s 26-23 win at Boston College • The interception came on BC’s final drive as the Eagles sought a potential game-winning score • Extended FSU’s streak to seven games with an interception, the third-longest active streak in the nation and FSU’s longest since 2007 • Leads FSU with 12 pass breakups this season.

SPECIALIST – Israel Abanikanda, Pitt, So., KR, Brooklyn, N.Y.
Delivered one of the most crucial plays of Saturday’s 48-38 win over Virginia when he returned a kickoff 98 yards for a touchdown • The TD broke a 14-14 tie in the second quarter, and Pitt never trailed again • It was the Panthers’ first kickoff return for a touchdown since 2018.

CO-ROOKIE – Will Shipley, Clemson, Fr., RB, Weddington, N.C.
Recorded 112 rushing yards on 19 carries with two rushing touchdowns and also threw for a touchdown in Saturday’s 48-27 win over Wake Forest • Rushed for multiple touchdowns in a fourth game this season to tie Travis Etienne (four in 2017) for the most games with multiple rushing touchdowns by a Clemson true freshman since 2000 • Threw a two-yard touchdown pass, the first by a Clemson non-quarterback since Sammy Watkins’ 52-yard touchdown pass to Andre Ellington at Florida State in 2012 • Became the first Clemson non-quarterback to both rush for a touchdown and throw for a touchdown in a game since C.J. Spiller — Shipley’s position coach — did so at NC State in 2009 • Third ACC Rookie of the Week accolade of 2021.

CO-ROOKIE – Tyler Van Dyke, Miami, Fr., QB, Glastonbury, Conn.
Fourth ACC Rookie of the Week honor in five weeks for Van Dyke, who continued his stellar first year with a standout performance in Miami’s 38-26 win over Virginia Tech • Finished with 357 yards and three touchdowns with no interceptions, completing 19 of 33 passing attempts • Became the only ACC quarterback in the last 15 seasons with five straight games of at least 300 passing yards and at least three touchdowns.