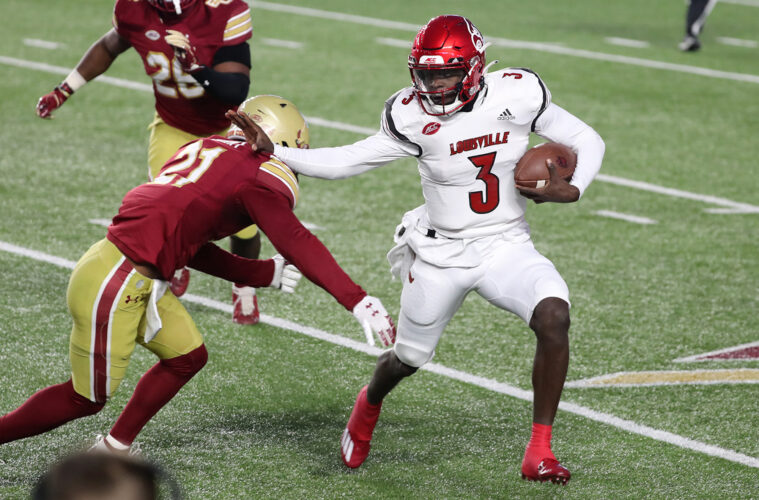 This is the type of year that a sports writer can ‘Copy & Paste’ a game story from game to game. Louisville has outgained a number of its opponents during the 2020 season and did again on Saturday evening vs. Boston College.

But yards don’t win games. Points do. And Louisville settled for FGs, turned the ball over and had timely penalties to lose to Boston College. Any of that sound familiar? Well, it probably reads like a lot of post-game write ups from the 2020 season.

Louisville is now -14 on the season in Turnover Margin. That’s decidedly last. Louisville gives up turnovers and they don’t exactly get them back either. If dropped interceptions were charted UofL’s would be off the charts. But it really is the giveaways that is the main problem for Louisville. Only the Duke Blue Devils give away the ball more than UofL… and even Duke takes more back enough to not be LAST in Turnover Margin.

In the end Louisville Football on Saturday versus Boston College has been the same story week after week. A lot of promise, a lot of yards and irrecoverable mistakes made as a sloppy football team.

Louisville has only remaining game in 2020, scheduled for December 19th vs. Wake Forest. And we’ll see if that game is actually played as Wake Forest continues to deal with scheduling problems with COVID-19. The last game of the season may be earlier than planned, it might be against and entirely different opponent.

UofL has not given fans a lot of reason for hope for 2021 beyond a steady defensive improvement and a lot of yards gained……….. but there’s more to winning football than that. And Louisville isn’t doing to be a winning football team in 2020.