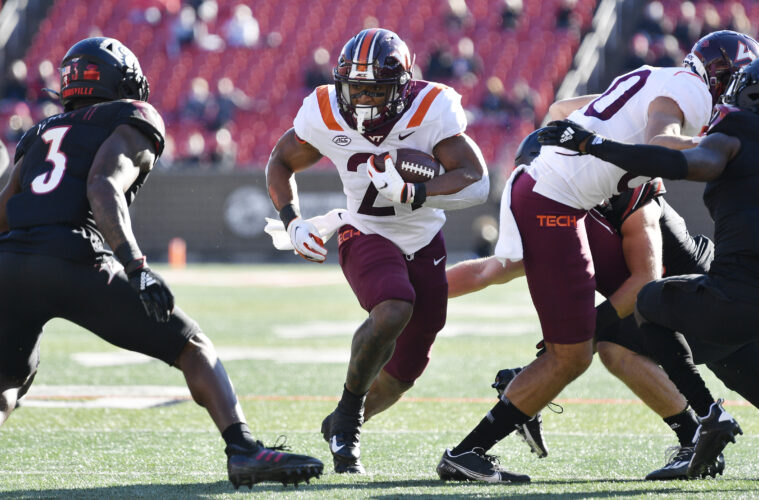 Cards Had Just 5 Defensive Lineman, Long List of Players OUT

Louisville didn’t have Hassan Hall, Yaya Diaby, Malik Clark, Tabarius Peterson, Dayna Kinnaird, Ja’Darien Boykin, Monty Montgomery, Micah Bland, Ryan Harwell or Isaiah Hayes. The Cards had to make due in this game without starters or in some cases even the back-ups back up. Going to the 3rd level of the depth chart is never a good way to start a game, but this is sports in 2020.

Louisville’s defensive line was particularly affected and losing a playmaker like Monty Montgomery who had been so good against the run in the last two outings versus Notre Dame and Florida State was a huge loss. In the end the Cards took the field supremely short-handed and gave up 466 yards of offense.

It was a horrendous beginning for Louisville. Virginia Tech scored TDs on its first 3 of 4 possessions and built a 21-0 lead. Louisville offensively to begin the game had 2 punts, an interception and a turnover on downs. The Cards had 43 yards in the 1st quarter….. they finished with 548.

Louisville found its groove offensively too late in the game with too big of a hole to climb out of.

3 Turnovers. Hokies Had 10 Points Off Turnovers

When a team is short-handed the one thing it can not do is turn the ball over. Louisville had 3 Turnovers (3 interceptions). The Hokies had 10 points off those turnovers.

This has been a theme. Renato Brown unsportsmanlike versus Georgia Tech and Notre Dame. This week is was Nick Okeke getting one late in the game as the Cards got to 3rd down in a critical situation (it was a flop from VT, but we know the ACC officials are blind so it can’t happen).

Then a delay of game when Louisville was able to outflank VT on an on-side kick and Javian Hawkins recovered while off to the races. The Cards had 7 penalties for 60 yards… but they all seemed to come at critical times and setting the Cards back after big moments.

It’s hard to really criticize the defense. A lot of players played a ton of snaps and tackling erodes as players get tired. And to add to that a lot of players were playing their first significant game snaps of the season on Saturday…… so this comes with a big caveat.

But the tackling has to be better. Louisville found themselves in the backfield and just didn’t fire to make the play. They did all that work to get there and had nothing to show for it. The tackling must improve and become consistent. Louisville had 8 great quarters defensively coming into the game vs. VT…. hopefully they can get some guys back and resume what they had going previously when they get to Charlottesville.

Too Much Pressure In The Backfield

Louisville did cut down its Tackles for Loss allowed again, but there was way too much pressure in the Louisville backfield. That pressure creates chaos in the passing and running game making it difficult to take pressure off the short-handed Louisville defense.

Louisville hasn’t played a team yet that is scared to bring pressure. That has to change.

Getting the Hokies to throw the ball would have been a big deal. Hendon Hooker only attempted 10 passes in the game after throwing 3 INTs last week versus Wake. Louisville’s DB had been doing a great job of breaking up passes and it seemed like a rash of interceptions could be possible IF they could force VT to the air…… but the short-handed DL couldn’t hold up the rushing attack enough…. and the 21-0 lead kept the Hokies from having to throw. Tough consequence.

Louisville didn’t quit in this game. Down 21-0 this game could have gotten out of hand and we could have seen an epic blowout. We didn’t.

It’s still a loss and midway through Year 2 of the Satterfield era there are some themes that can’t continue…… but the Cards don’t quit. And that’s a theme to hang your hat on.

Perhaps in 2020 with a 2-5 record with limited fans and during a pandemic we can just allow a team to lose a game when they were ripped apart on defense? The program is beyond moral victories and we’re clearly in a rebuild…… but this team is competitive and they don’t lie down when lesser teams might.

Personally I don’t exactly know the proper tenor to strike or what the major takeaway from this game is. Losing sucks and losing 5 games this year (4 to Coastal teams & the #4 team in the nation) isn’t what we thought we would see.

So I’ll just leave it at this: